Landing on Mars for the first time and after meeting an alien race, the lone female astronaut Alita (Virginia Huston) excitedly proclaims, “What I want to see is the kitchen!”

There’s a charming (slightly, anyway) naivety in this Monogram-produced cheapie. Gearing up for the space race, Flight to Mars shows certain ambition. In this sci-fi future, humans skip the moon landing entirely – they aim rockets directly toward another planet.

The paranoia is potent, of a different time, as with all of Flight to Mars

On arrival, wearing standard flight suits amid a snowy Mars (which no scientist shows any interest in), they meet Martians who look exactly like humans. Being of the Cold War, there’s a scheme to overthrow the Earth-based visitors, take the technology, and invade. The paranoia is potent, of a different time, as with all of Flight to Mars.

During the trip, scientists enter a conversation about the state of being, life, and purpose. It’s time-wasting filler, meant to sound philosophically intelligent, but is beneath even freshman thinking. That’s notable only because Flight to Mars is so otherwise anemic in its plotting and tension.

Rather than deal in an intricate alien saga, the script slogs through painfully sexist tropes involving Alita’s romantic options. She’s berated for crying (for an hour and fifteen minutes according to her male counterpart), and swoons over the thought of technology that eliminates the need to wash dishes. To her, it’s not the planet, interstellar travel, or meeting life outside of Earth that’s exciting; it’s the cleaning, or lack thereof.

To say Flight to Mars once held a charm ignores the seminal Destination Moon that came out a year prior. There’s something cultural to all pre-space travel space travel movies when bundled as a whole, but individually, a majority existed to seize market share. Flight to Mars is one of them, and the commercialism makes its faults particularly magnified. 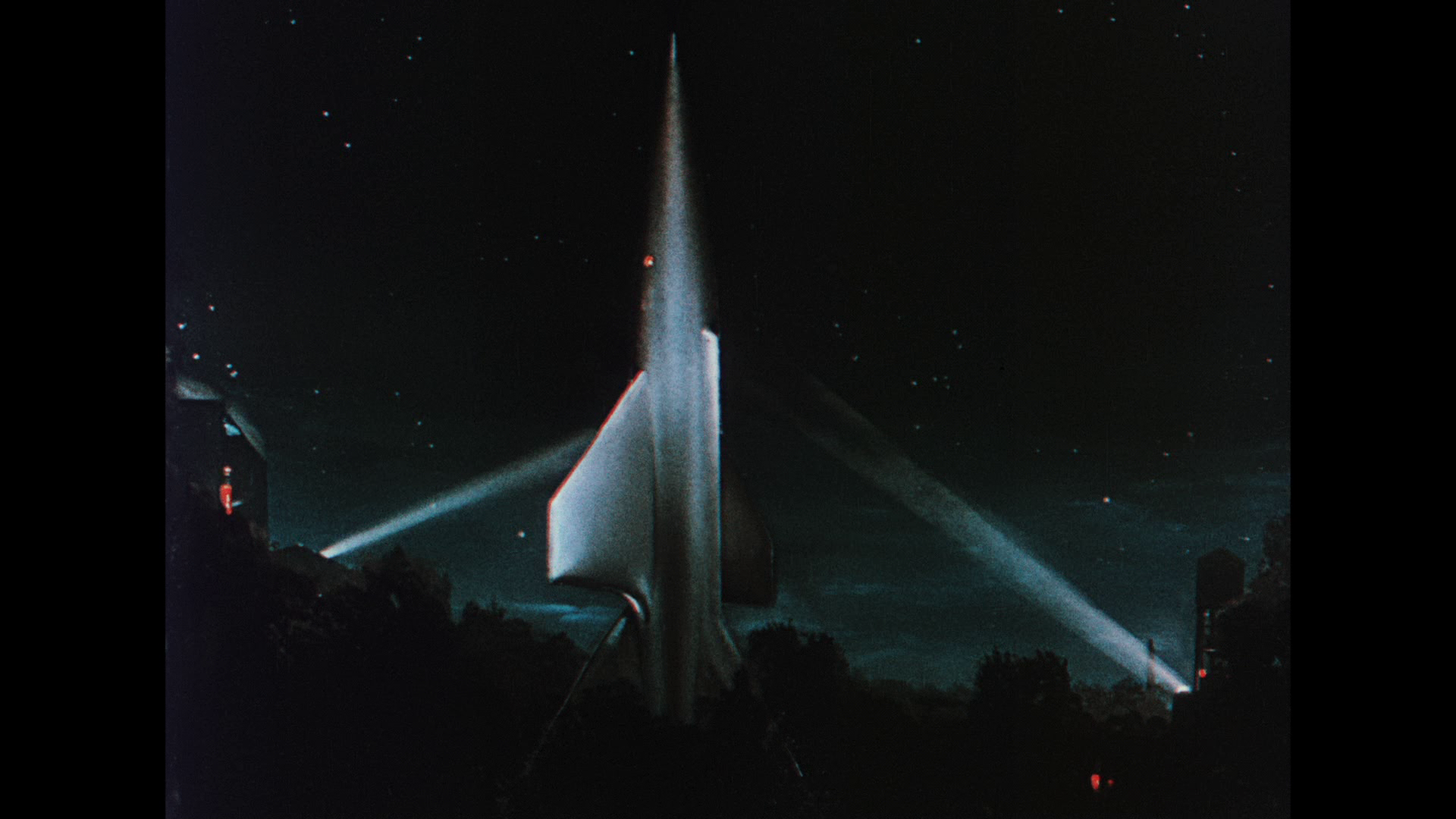 Wholly unique Cinecolor produces a restricted palette similar to two-strip Technicolor, but more dynamic in its hues. Enriched reds clash against the heavily dominate blues. Somewhere in the middle, flesh tones protrude, almost natural in an otherwise unreal output. It’s quite fantastic in a vintage way.

The print itself is practically spotless. Restoration catches nearly all specks, scratches, and dings. Also preserved, the precise grain structure, a little noisy but controlled by the encoding. Striking resolution can deliver capable texture, sharpness, and definition. Nothing grand, but enough to let Flight to Mars breathe in the HD era.

Emboldening the shadows adds some weight, but the nature of the film stock itself appears to limit density. Overall blue-ish tones take energy from pure black; often the darkest corners carry a small glow. It’s perky in contrast though, pure white and bold.

Note the first reel displays a noted difference to the rest. Afterward, grain shrinks in thickness, detail improves, and clarity increases. Both look fine in their own way.

Average fidelity renders the soundtrack’s treble with fair crispness given the age. Slight distortion at the peaks fare better than expected. There’s no bass support, so rocket boosters come through with a primitive thinness. That said, it’s accurate and satisfying.

Producer Walter Mirisch and Monogram/Allied Artists’s history are explored in a glossy 14-minute featurette. Then, a look at the early space films lasts 10-minutes, also excellently produced. Justin Humphreys then provides a commentary for the main film itself.

Kitschy and naively primitive, this pre-space race Flight to Mars skips past the moon to deal in Cold War paranoia deeper into the solar system.