Some credit is due for turning the all-American G.I. Joe team into a multi-national force for right. It’s ridiculous – imagine world governments deciding on a singular threat – but a variance on Hasbro’s original, propagandist toy line. Plus, it allows for casting variety, reinventing characters, their stories, and looks, then fueling conspiracy theories about New World Orders.

What that amounts to though is a merely dreadful, passe summer dud. The 2000s brought a number of these to life, gunk like Stealth and S.W.A.T., that exist in cinematic limbo. Minus the license, Rise of Cobra aligns with those. Hasbro saw dollars after Transformers, then came G.I. Joe.

Although he backtracked his statements, star Channing Tatum didn’t want to make this movie. Contractual obligations stuck him to the role of Duke, but it works. Tatum’s perfect for Duke, chiseled and athletic, carrying the look of a purely American soldier when on screen.

Avoiding much subtext, a near worldwide cataclysm is set in motion because men can’t relent their power and need to exert control over women. Plus, there’s a failed romance in the past. That leaves Rise of Cobra feeling particularly empty, even against the numbing Transformers, which at least acknowledged a more striking parallel between government, military, and the soldiers in the middle.

Rise of Cobra firmly locks itself into a cartoonish embellishment of good and evil. A suggestive early scene sees General Hawk (Dennis Quaid) viewing a presentation on a new super weapon with worry but not defiance. That’s Rise of Cobra as its deepest layer, displaying a certain lustful want for weaponry and power. Whatever the intent, that’s soon lost in explosions by the dozens, egregiously dated digital effects, and substandard origin stories.

Strange is the attempt to legitimize this toy line away from the blue/red laser battles from the well loved 1980s animated series. Rise of the Cobra comes across as especially violent, with a body count in the hundreds (not even considering civilians), exploded heads, bodies run over, and throwing stars piercing skin. By the end, submarine clashes underwater finally convey the toyetic qualities Hasbro’s action figures were designed for. Whether it’s ever exciting is debatable – or maybe not. 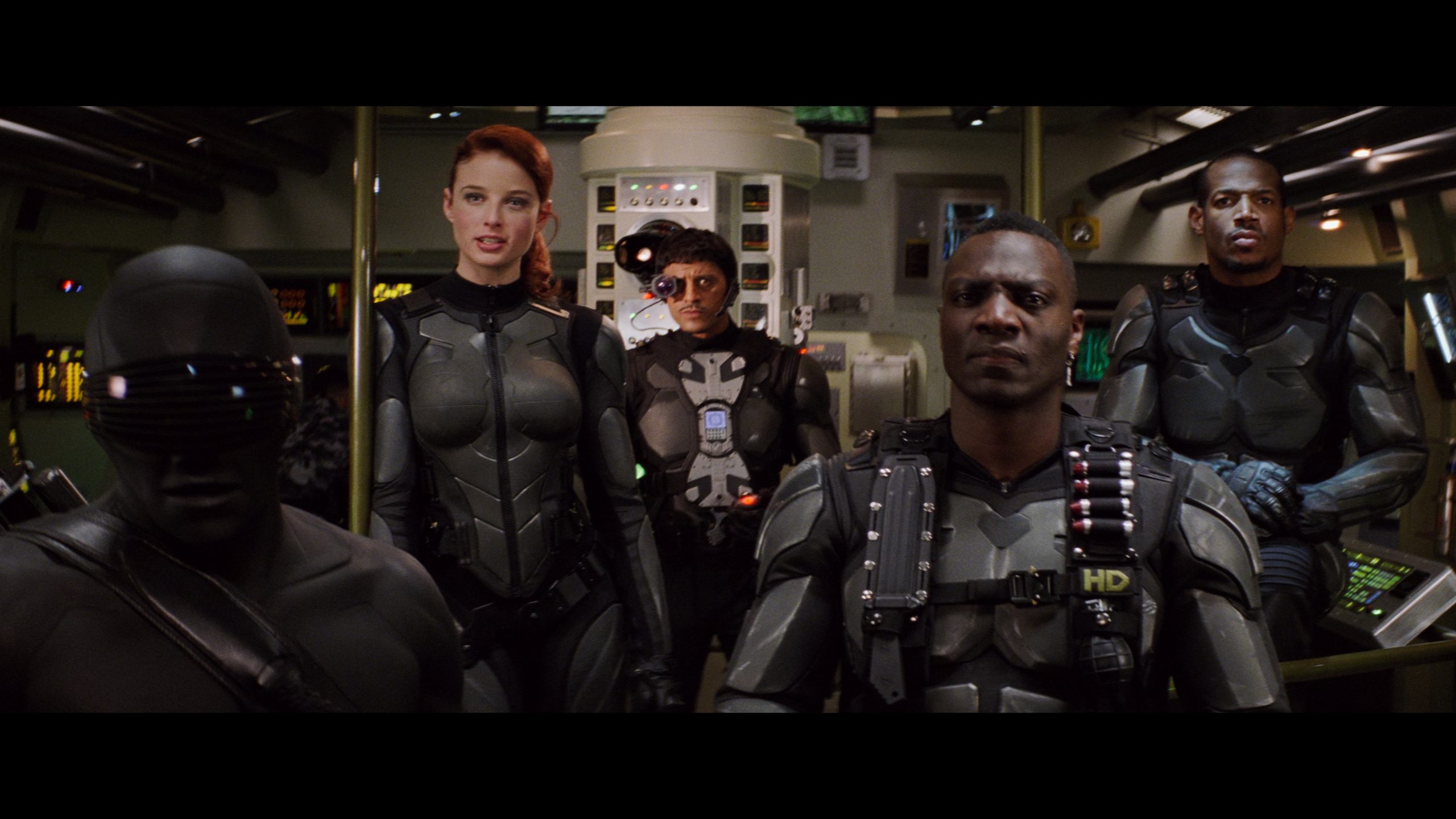 A case of total extremes, Rise of the Cobra’s Dolby Vision pass is both a gift and curse. On the positive side, explosions produce blinding light at their peak. Lasers, sunlight, and afterburners all look spectacular. On the flipside, black crush is brutal. There’s little to nothing evident in the shadows, and while the pure black is impressively rich, fidelity is a total loss. If the intent is mimic a cartoon, that works, but it’s not appealing either.

Small grain generally resolves well. Some chroma noise is a marginal bother. That’s mostly caused by the perky, intense, saturated color. Dolby Vision makes definite gains here. Flesh tones reach glowing levels along with the other primaries. Rise of Cobra looks as if set on vivid so nothing is natural, but cranked to extremes.

Finished at 2K, the upscale process adds slight boosts to definition. Also, it exposes the weak CG elements, of which there are many. Overall sharpness fares well and consistent. Texture holds up, mastering decent enough to show improvement from the Blu-ray, albeit marginally. As is, Rise of Cobra is an upgrade for die-hards alone.

Unfortunately not given a remix, the copied DTS-HD 5.1 runs low on volume and needs a boost. Bass then reaches capable levels, giving action scenes weight and dynamic punch. It’s not the strongest rumble on the format, but gives beefy engines, missiles, and gunfire needed power.

Where the track excels is in directionality. Separation drops bullets into each channel as they fly around. Rockets drift through front to back as they pass, the motion smooth, the transitions spectacular. Vehicles pass by precisely too, underwater, in air, or on land. Even voices split the stereos. Superb, and almost perfect aside from the low-end.

A decent commentary from director Stephen Sommers and producer Bob Ducsay marks the sole extra in the bonus features. Paramount does not port additional extras from the digital copy disc that originally came with the initial Blu-ray.

Lost between paying tribute to a toy line and playing to modern military action, Rise of Cobra never finds its tone.