Snatch is filled with tough guys. The toughest. Vinnie Jones who kills anyone in his path. Brad Pitt as a bare knuckle boxer. Alan Ford plays the boxing promoter, feeding any dissidents to pigs.

Where the heist movie so often details the fearless gangsters trying to erase one another from existence, Snatch chooses to portray these men as lacking, infinitely British buffoons. Jason Statham and crew have never projected less raw masculinity than they do here. Through its hilariously spiteful, morbid chaos, Snatch peers into an underworld not to celebrate the violence, but rather, to mock it.

Snatch peers into an underworld not to celebrate the violence, but rather, to mock it

Of course the gunplay and fighting create entertainment; that’s the goal. In doing so though, the sheer idiocy and incompetence dilute the severity, even drawing the occasional wink. Vinnie Jones shows zero empathy in wiping out any opponent, but can’t bring himself to off a dog, playing to the idea of movie audience’s unable to emotionally take an injured animal compared to limitless human body counts.

An underworld culture bolstered by Scorsese and others, now in Guy Ritchie’s hands, becomes totally unraveled. In every facet, Snatch creates terrible people who do ever worsening things, offering no central hero to root for. Yet, each is so carefully drawn as to make their greedy squabbles delightfully morbid, it doesn’t matter who succeeds.

Snatch isn’t a gangster movie about watching the mob fall from grace – it’s about watching them desperate to win something in the first place. Everyone starts at an unforgiving bottom, and by the end, maybe makes it halfway. So faulty is this mob plot, the eventual score needs dissected from a dog’s guts (and thankfully, the canine survives, because it must).

Ritchie’s erratic flair dates Snatch a little. The soundtrack does too. There’s no doubt this originated in the new millennium. An esoteric style helped Snatch then, not so much now. But, the abstract absurdity in the story itself fits to the wild camera movements, almost always tipsy and imbalanced. If that aesthetic works for anything, it’s Snatch. 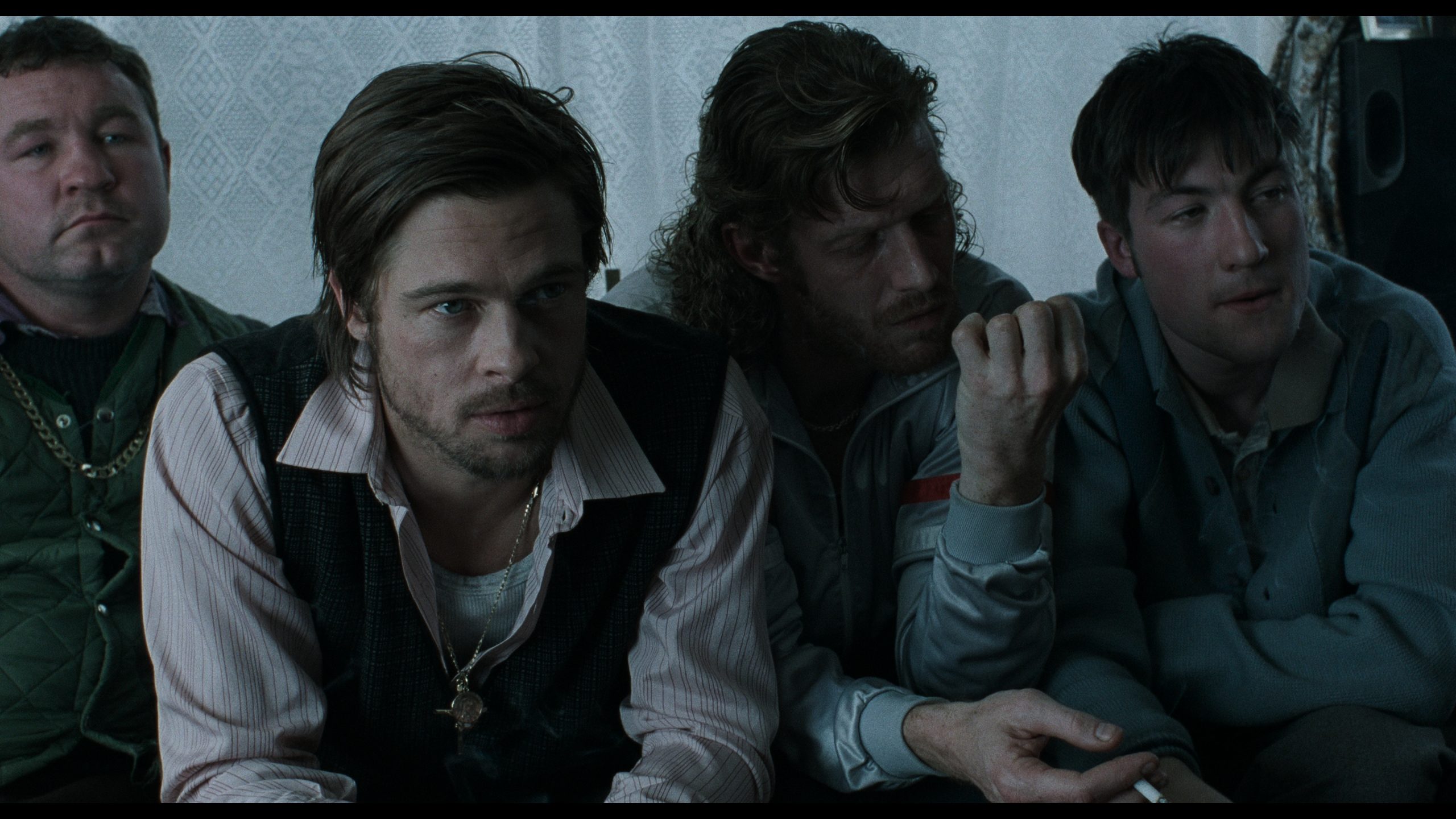 Sony gives Snatch a generous high-resolution master for this 4K debut. A firm grain maintains accuracy, consistently natural to maintain the film stock’s appearance. It’s pristine, and given the bump to 4K, detail jumps too. Texture pops off the screen, facial texture resolved, wide shots just as pristine. Definition only lapses as the cinematography does, or as burned-in text takes up room on screen. That’s normal and acceptable.

A film from the early digital grading era, the oppressive palette isn’t much to see, even with the added tech behind it. Blue and teal keep total control over the image, shrinking flesh tones and dropping primaries off the screen. It’s arguable Snatch gains slight energy on UHD, but it’s never going to become a dazzler.

Occasional crush hampers shadows, a minor fault in an otherwise appealing, dense HDR grade. Given the darker design, there’s definite potency over the Blu-ray. However, the color grading limits the upper ends of the contrast. Brightness stops at peak teal/blue, never allowed to hit pure white. Snatch limits itself, and HDR can only do so much. Occasionally though, a light pierces through with decent energy, say reflections from window shops the crew passes street side.

One place Guy Ritchie’s chaotic camerawork helps is in giving potential to the Atmos mix. Swirling cinematography lets the mixing take hold, drifting between speakers perfectly. The smoothness in channel transitions gives the sound an engaging, even perfect movement. Cars passing when out in the open provide ambiance, and little touches excel too, like a hubcap rolling after a trailer falls apart, doing a full 180 through the soundstage. Crowds and pig pens jump from stereos or fronts as needed.

Early ’00s techno blows up the low-end, giving Snatch needed punch – and so do actual punches. Range keeps in balance with the dialog, dropping the action scene deep, producing a satisfying rumble. Nothing particularly bold or memorable, but energetic anyway.

Everything is on the Blu-ray. Guy Ritchie joins producer Matthew Vaughn for a commentary. Deleted scenes continue their chat. A 24-minute making-of is deep and quite fun, some EPK-ness aside. Storyboard comparisons and an image gallery lead into trailers.

Snatch blends its hyper violence with caricature comedy in a rapidly successful heist story that still holds up decades on.