A Rock Masterpiece By Cameron Crowe

More than a love letter to the Rock music scene of the 70s that Almost Famous so richly celebrates, it’s a beautiful coming-of-age tale for an intrepid music fan. Director and writer Cameron Crowe’s film is one of those incredible films in which every bit of Hollywood’s magic comes together for unbelievable results. It will always be the Academy’s mistake that the highly overrated Gladiator stole Best Picture from Almost Famous, a far better and more rewarding movie.

Almost Famous delights audiences because the semi-autobiographical story by Cameron Crowe feels sincerely genuine and earnest. Crowe largely adapts his own life story from his days working as a teenage music journalist covering some of Rock’s biggest acts in the ’70s. He encapsulates his first-hand personal experiences in warm and funny tones, capturing the essence of a struggling rock band hitting the heights of fame and glory from his outsider’s perspective. Sex, drugs and Rock ‘n Roll have never been so friendly and inviting.

Almost Famous tracks the rise of Stillwater, a fictional rock band on tour in the early 70s. They are an amalgam by Crowe of several different groups, including Led Zeppelin, Lynyrd Skynyrd, and the Allman Brothers. The main protagonist is young William (Patrick Fugit), a 15-year-old already on the verge of graduating high school thanks to his overprotective and driving mother. Falling in love with the Rock music left to him by his older sister, he amazingly becomes a music journalist writing for Creem and Rolling Stone.

Having grown up with no male role model in his family, the young and impressionable William develops a rapport with Stillwater’s dynamic guitarist, Russell Hammond. Following them on tour for a Rolling Stone piece, William witnesses their lifestyle up close and becomes friendly with them.

The young and wide-eyed journalist also forms a bond with Penny Lane, a sweet life-of-the-party girl who hangs with Stillwater as a fun-loving groupie, or as she calls them, band-aids. Russell and Penny Lane are close, posing a problem for William as he develops feelings for her. She’s quite the heartbreaker.

There are so many unforgettable and rich moments in Almost Famous. Everyone remembers the band singing Elton John’s Tiny Dancer together on their tour bus. The almost-plane-crash which shakes up Stillwater, unleashing their most private and bitter feelings as they think they are doomed. Cameron Crowe shapes and crafts each moment with indelible passion, earnestly resonating with fans his deep love of the music. Few movies are as pitch-perfect in tone and feel about their subject as Almost Famous. 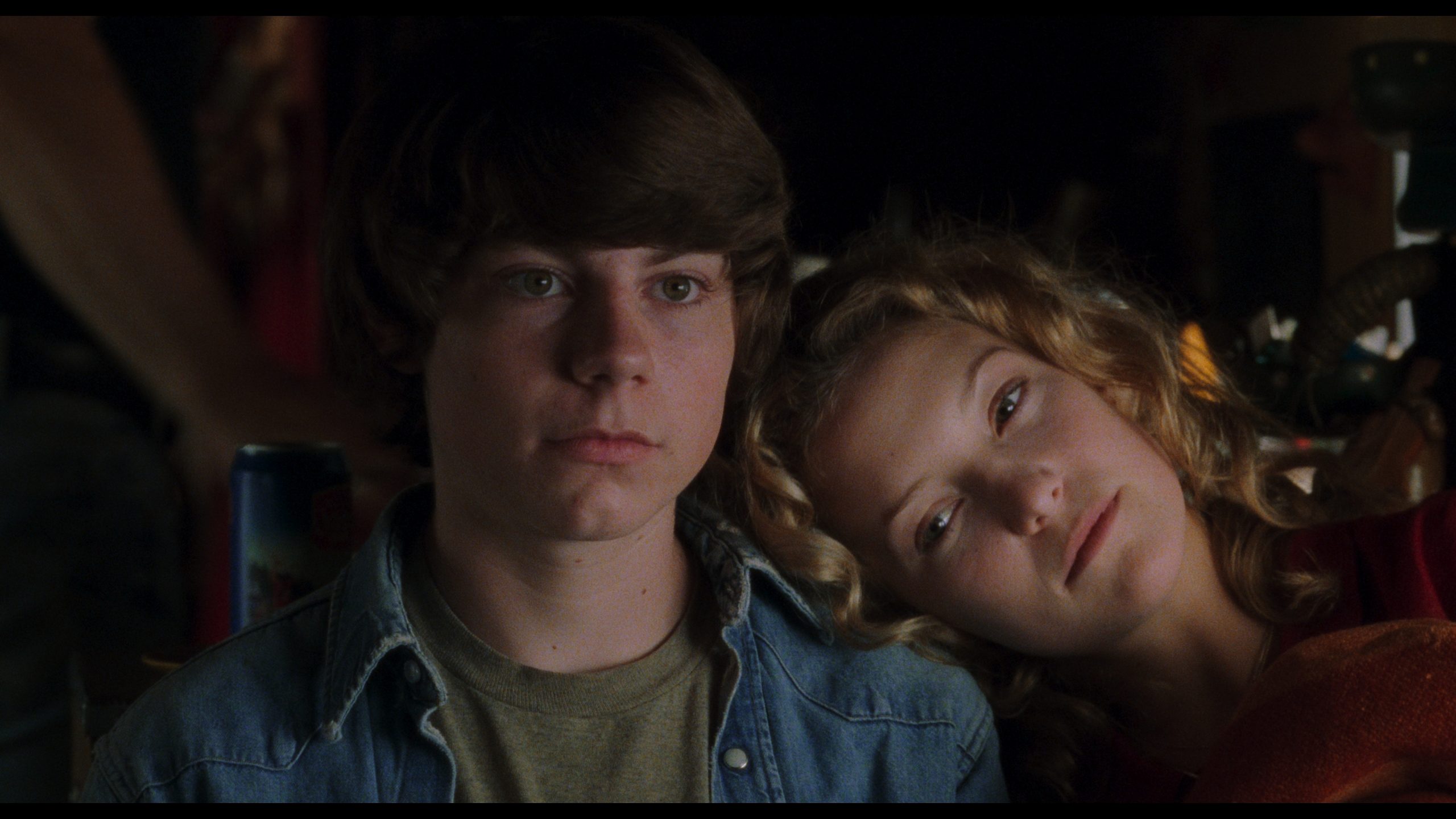 Paramount provides both the theatrical cut and the “Untitled” Bootleg cut in the two-disc 4K UHD SteelBook. Each cut gets its own dual-layer UHD, though Paramount probably should have used a UHD-100 for the Bootleg Cut’s extended 161 minutes. Nevertheless, the HEVC compression neatly handles the texture and fine grain structure. Encoded with 12-bit Dolby Vision, the new 4K film restorations for both versions look excellent and offer a vast upgrade over earlier editions.

The organic film transfer exudes crisp definition and healthy color. Almost Famous isn’t demo material for the format but it’s a faithful, unfiltered presentation. The 1.85:1 video has outstanding highlights and shadows, refined with generous detail and ample definition. Crowe doesn’t go for an exotic color grading in this transfer personally approved by the director. Colors are warm and manageable, a slight amber suffusing the lush palette.

Cleaning up past mistakes made on earlier home video transfers, Almost Famous has never looked better. This is an outstanding 4K remaster from pristine film elements. The video quality is excellent for a 2000 production, made before digital cinematography took over Hollywood. The Dolby Vision color correction is restrained and tasteful, subtly enhancing color gradations with a richer contrast.

There are no significant visual differences between the theatrical cut and longer Bootleg cut. They’re visually identical.

Some reports by users indicate that their theatrical cut contains bursts of strange pixelation. It wasn’t a problem for my copy but that is something to keep an eye on. It does not appear to be widespread and may only be there for certain hardware set-ups.

Cameron Crowe was a trailblazing rock journalist in the Seventies with sublime musical tastes, covering some of Rock’s biggest acts like the Allman Brothers, Led Zeppelin, Neil Young, Joni Mitchell and Lynyrd Skynyrd. He also ended up marrying Nancy Wilson, one-half of female rockers Heart. If anyone knew rock during that era inside and out, it’s Cameron Crowe.

The soundtrack results are impressive enough that super deluxe vinyl and CD editions from Universal Music are being released in conjunction with this movie reissue. Music highlights from the movie’s soundtrack include classic songs from Stevie Wonder, Elton John, Simon & Garfunkel, the Allman Brothers, and other iconic acts that dominated the late ’60s and ’70s. It’s believed the licensing costs were over $4 million alone.

Almost Famous hits UHD with the same 5.1 DTS-HD MA audio previously available on Blu-ray for both cuts of the movie. That may sound disappointing but the movie is largely a dialogue-driven affair. This is not a complex mix with heavily active surround design.

There’s a cool effect when the mix moves predominantly from mono to stereo, signaling young William’s growing musical awareness. The most intense “surround” experiences come late in the film, when Stillwater hits the stage in concert and the sound expands across the front and rears with excellent channel separation and discrete activity.

The songs have clean, clear dynamics and sweet higher frequencies. Though a close listener will notice a touch of analog grit from them, as if they are listening to a well-mastered LP with vinyl’s distinctive qualities. That seems to have been intentional by Crowe.

Optional English, English SDH, and French subtitles play in a white font. They are available for both cuts. A French dub in 5.1 Dolby Digital is also included. Those looking for other dubs are encouraged to look at Sony’s release in Europe.

Folks, we have a winner. Paramount has answered the call of long-suffering fans with a gorgeous 4K SteelBook. A picture of Kate Hudson as Penny Lane highlights the cover art. Upon release, Paramount has made this 4K set only available in a collectible SteelBook configuration.

The two disc 4K UHD release offers new special features, a heaping of older bonus features pulled from prior DVD and Blu-ray releases, and both cuts of the movie in 4K. The theatrical version is presented in 4K on disc one with all the bonus features; the “Untitled” Bootleg Cut is on disc two with the existing group commentary led by Crowe and his mother.

It should be noted that Sony released a largely identical Almost Famous 4K UHD set in the UK with both cuts as well, though a few missing special features are found here, including the Rolling Stone articles and HBO’s making-of featurette. This Paramount SteelBook edition is the clear winner unless you need more foreign language dubs and subtitles.

The disc’s menu cleverly breaks up the new featurettes under “New Releases” and older archival features under “Greatest Hits.” These new featurettes include Cameron Crowe discussing what the film meant to him and more reflections on the production. The older bonus features often have audio introductions by Cameron Crowe and in one featurette you hear the director breaking down his ten best albums of 1973. Subtitles are available for the special features.

Audio Commentary – A fantastic group commentary led by director Cameron Crowe and his mother Alice Marie Crowe covers the Bootleg Cut. Others appearing include Mark Atkinson of DreamWorks, Crowe’s two film partners and producers, and even a family friend. Personally revealing and unpretentious, there’s an easygoing and mostly lighthearted chat that delves into the factual basis for Almost Famous, production notes, and more laughs. There’s a fascinating amount of inside knowledge revealed and there’s some sadness when Crowe mentions how he was close to the Lynyrd Skynyrd members that died in the fateful airplane crash.

Cameron Crowe’s greatest film is a fictionalized account of his heady days as a teenage music journalist working for Rolling Stone magazine.