Nearly all of Howard the Duck’s problems stem from its unwillingness to admit comic books weren’t just for kids. Talking alien ducks? All for the kids. But that’s now Howard.

It’s bizarrely managed as this creature wanders Cleveland, getting sexual with Lea Thompson, and making the occasional off-color remark, but plays the rest so casually. Howard isn’t so much a character as an attraction, a quip-machine without purpose. As such, Howard the Duck can’t find its own potential enthusiasm.

The ‘80s were right for this project. When Howard lands on Earth, he does so in the punk era. Big hair, big leather, big makeup. He’s accosted by a social worker who’s sick of outcasts using their oddball identities to dodge work. It’s a story rife with possibilities to expose cultural biases in a society resistant to change. That’s not what Howard the Duck does. At all.

Howard the Duck doesn’t know what it is; after Superman, cinema took decades to truly understand comics, a few outliers (1990’s Teenage Mutant Ninja Turtles among them) aside. Howard the Duck’s problem isn’t that it existed, rather that it existed at both the exact right and wrong time. Misunderstandings are central to both.

Watching Howard the Duck is to see a movie working around its central character. Effects limitations often anchor the lead in front of the camera, which waits for him to say something not entirely amusing, then a cut to an actor. It’s stubborn and choppy. By the time demon entities charge toward Earth, the interest cratered because Howard the Duck failed to establish tone, identity, or theme. The script assigns comics a shallowness, judging the project on surface context alone, not the genuine absurdity available in the source material.

If there’s a legacy to Howard the Duck’s infamy, it’s a cult following that can appreciate the attempt in balancing the sarcastic crassness with a finished product that appeals to kids. It never works, but there’s also a stepping stone that awkwardly pushed adaptations of the future forward. Howard the Duck became a learning effort as Hollywood tussled with their demographics. In an alternate reality, maybe Howard’s own, this movie succeeded and the need for a Marvel-verse never happened. Or, maybe it started here because someone found the spark in this asinine idea. We don’t live in that place. 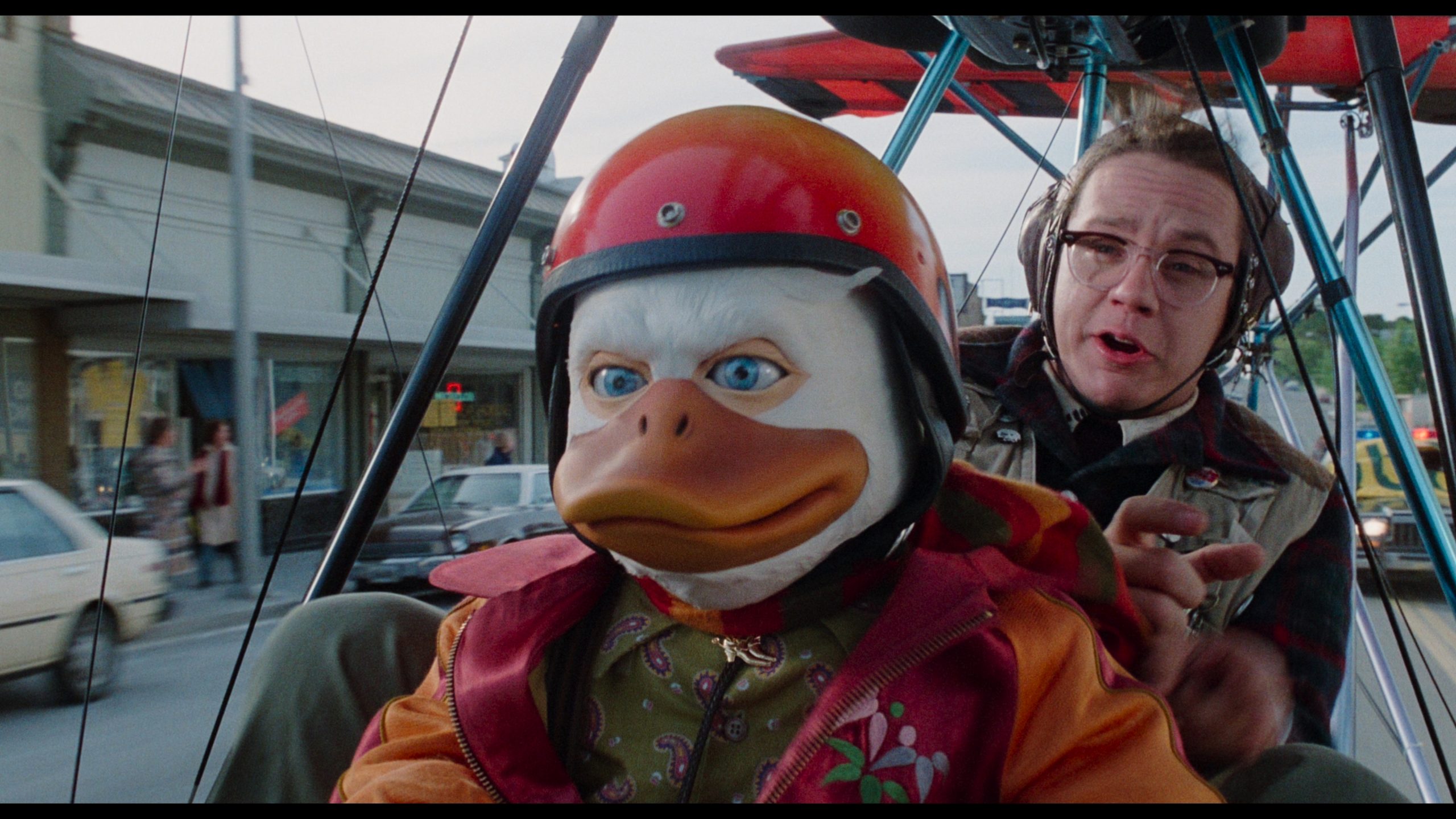 Universal cares enough to give Howard the Duck an A-tier master. It’s gorgeous. Premium resolution doesn’t shy away from detail, revealing gobs of texture on Howard, facial detail on humans, and the grime around Cleveland. Busy ’80s scenery, whether in Lea’s apartment or graffiti-laced buildings, all look spectacular. Sharpness is overall superb.

An HDR grade can’t overcome black crush at the source. Darker cinematography contains a few too many blotchy shadows, a detriment if not a total loss. Besides, the highlights look ridiculously vibrant. Howard the Duck sports a revised sheen, emboldening Howard’s white feathers as light glistens against them. Street lamps and neon glow brilliantly.

Color saturation is a win too. Primaries excel in density and intensity. Every hue is gorgeous and elevated without being over saturated. Plus, the encode doesn’t create problems even in the deepest reds. Flesh tones sit natural and pure.

Aggressive remastering bumps the original audio into a wild DTS:X track. The initial earthquake sends a dynamic rumble into the low-end that’s far better than most films of this age. Thunder hits the same, as does the other action. Jenning’s powers carry excellent pop during the diner scene. There’s surprising range, and it’s done well, as if always part of the mix.

Nicely spread through the soundstage, directionality finds use for each speaker. Rain drips in seedy alleys, thunder roars from overhead, ambient music slices through the fronts/rears, and the city comes alive. Thompson’s concerts spread wide and deliver a solid bass line.

Both the UHD and Blu-ray contain the same bonuses. They begin with a 26-minute retrospective. A 12-minute featurette digs into post-production, followed by an EPK from ’86 on the stunts that runs two-minutes. A news report from the release comes up short of two-minutes, with another based on the visual effects, then the music.

Infamous, messy, and tonally bizarre, Howard the Duck’s greatest lesson is in treating the source material with respect.