James Franco’s ambitious but flawed Zeroville sat on a shelf for the better part of five years before seeing release. Adapting the acclaimed novel by Steve Erickson, Franco put his creative weight into this off-kilter passion project as both star and director. An ode to legendary Hollywood lore from the Seventies and the art of film editing, Zeroville’s surreal storytelling and subtext are aimed at movie nerds and cinemaphiles.

Originally filmed around 2014 with Franco pulling in a long list of superstar Hollywood friends from his rolodex for the cast, the project was finished in 2015 before distributor Alchemy soon went belly up. Then the Hollywood star was enshrouded in #MeToo allegations, which put a hamper on the movie finding a new distributor. It’s now hitting home video in 2021 after a token theatrical release in 2019, an eternity in Hollywood time.

The all-star cast features Megan Fox as the love interest, Seth Rogen as a colorful Hollywood personality, Will Ferrell as a slimy movie executive, Danny McBride, Joey King and others. Megan Fox plays a sexy actress struggling in the business, obviously not a stretch for the Transformers starlet. Will Ferrell is his wonderfully goofy self as a studio executive. Craig Robinson provides laughs as a friendly robber in a few hilarious scenes.

The one star out of place is Seth Rogen, delivering an over-the-top and obnoxious character that some believe is a parody of Hollywood screenwriter and director John Milius (Conan the Barbarian, Red Dawn, and too many other films to mention). Rogen relishes hamming it up for the camera.

Franco calls in a lot of favors with his Hollywood buddies for this indulgent, quirky surreal dramedy that serves as a kind of satire and love letter to early ’70s Hollywood. The best way to describe Zeroville is that it’s the bastard child of Once Upon a Time in Hollywood and Fear & Loathing In Las Vegas. Zeroville isn’t a pure comedy by any stretch. There are funny moments mostly thanks to its talented comedic performers, playing off Franco’s character as straight man.

Ike Jerome (James Franco) lands in Hollywood in 1969. A sheltered man who only watched his first film eleven months ago, his shaved head reveals a tattoo of Elizabeth Taylor and Montgomery Clift from their legendary romance in the classic A Place In the Sun. Having fallen in love with filmmaking and movies, the odd man soon finds employment in Hollywood. First as a lowly set builder, then as a film editor under the tutelage of Dotty (Jacki Weaver). Jerome ultimately picks up a new name along the way, Vikar.

Vikar’s life is changed forever when he meets struggling actress Soledad (Megan Fox). The screen siren becomes an obsession for Vikar. Their tragic relationship drives much of Zeroville’s narrative. Having proved his skills as an editor, the studio makes Vikar a director. Vikar’s life arc is a snapshot of the turbulent changes happening in Hollywood as the studio system began dying out and a wave of young, maverick directors like George Lucas and Steven Spielberg charged forward.

It’s a shame Zeroville didn’t come out sooner. While it’s not a perfect movie, a more experienced director could have made this a wonderful oddball comedy with a dash of pathos for good measure. James Franco the director lets down his own bizarrely intense portrayal as Vikar, going heavy-handed on meta-references to film editing and Hollywood glitz.

Seth Rogen is the only star here that doesn’t pull his weight. However, casting Megan Fox as the beautiful but struggling actress is a masterstroke that works out beyond expectations. There’s much to enjoy here for movie geeks who know that Ali MacGraw starred in Love Story, the torturous struggles Francis Ford Coppola had making Apocalypse Now, and a passing familiarity with Jodorowsky’s notorious The Holy Mountain.

I hope Zeroville finds an audience despite a half-baked screenplay. Franco’s movie is no masterpiece but his heart is in the right place, serving up a surreal and almost delirious ode to classic Hollywood with vividly sketched characters. Definitely not for everyone, movie geeks with a knowledge of classic filmmaking should give Zeroville a shot. 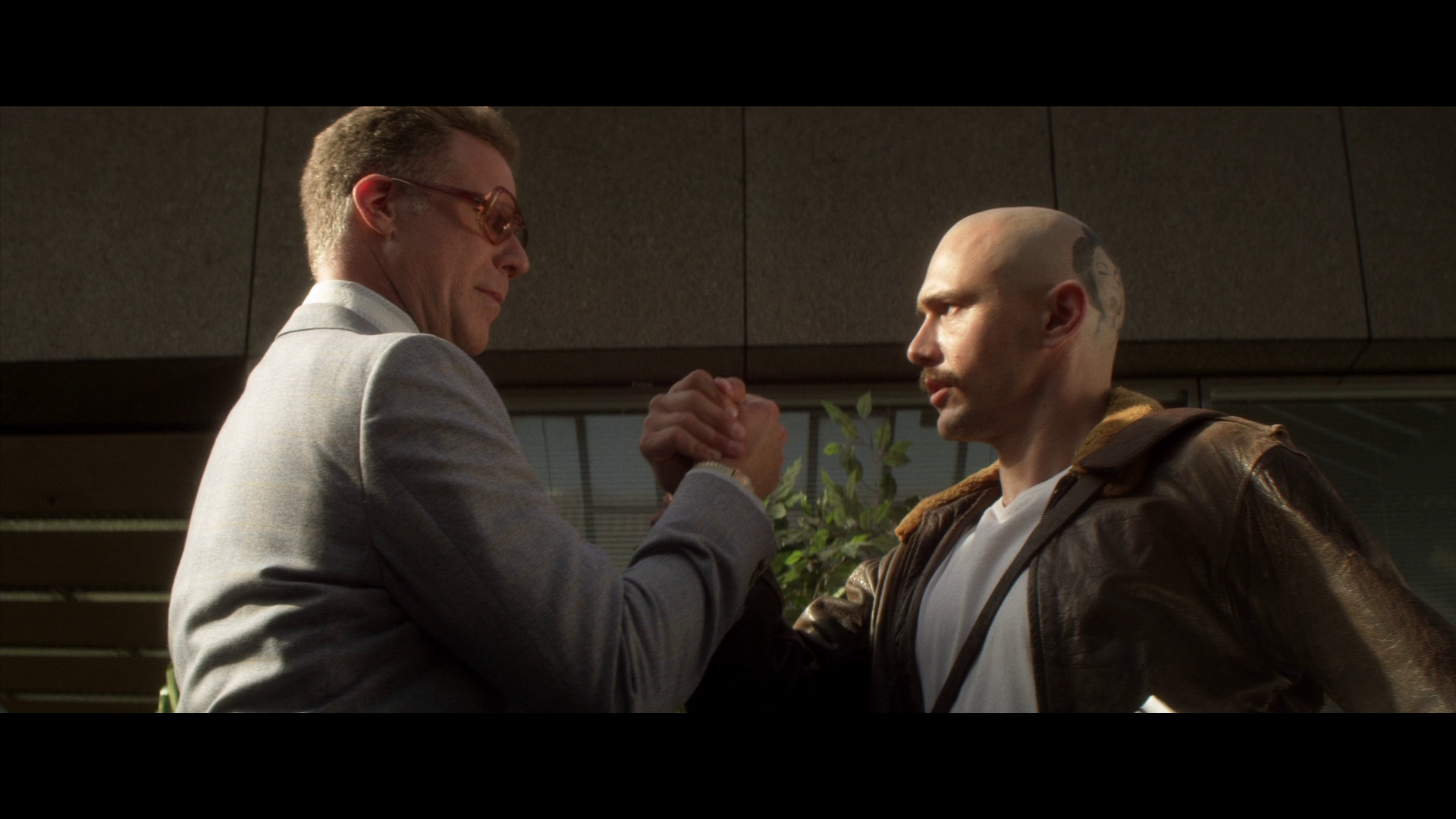 Zeroville receives a fine transfer from an immaculate digital intermediate with no immediate issues. The razor-sharp 1080P video reflects its bright, over-driven digital cinematography. MVD Visual provides a BD-25 for the main feature, which runs 96 minutes in transparent AVC. The 2.35:1 presentation employs a variety of exotic lighting under Franco’s flashy and occasionally annoying direction.

The clarity and definition fit right at home on Blu-ray. Zeroville isn’t reference-caliber video but detail and texture are on the high side. The unfiltered presentation exudes crisp resolution. Compression isn’t a problem and a few scenes are quite dazzling in their beauty, paying homage to vintage Hollywood cinematography.

Zeroville’s interesting score and music by Johnny Jewel is heard in excellent quality from the 5.1 DTS-HD MA audio. The nicely discrete mix offers fine channel separation, intelligible dialogue and solid bass. The clean recording has great dynamics with impressive depth. Franco uses a few neat tricks in the surround channels, highlighting the movie’s clever editing techniques. Zeroville cost a few million and the audio is a cut above most indie fare.

Optional English SDH subtitles play in a yellow font, partially outside the scope presentation. A secondary stereo 2.0 PCM soundtrack with less punch and depth is available.

MVD Visual as distributor provides no special features for Zeroville beyond trailers. This is a movie begging for a director’s commentary from James Franco and co-star Megan Fox.

James Franco stars and directs this quirky homage to ’70s Hollywood and film editing with an all-star cast, primarily aimed at movie geeks and those with an appreciation for film history.