Of course, Jordan and Bugs Bunny paired before this movie – in ads – cementing the inevitability of Space Jam. As adult, seeing past the blatant commercialization is impossible. Imagine entering another world through a corporate Warner Bros. logo, the type of thing that only happens in studio schlock, and Space Jam doesn’t even carry the self-awareness needed to justify itself.

In a way, Space Jam is accidentally masterful, a synergy of corporate superpowers banding together to sell their wares. Jordan’s enigma alone can sell Space Jam; the sketchy plot is barely relevant. The Chicago Bulls on fire through the ’90s, Looney Tunes having their final popularity spurt (before networks unceremoniously dumped them from regular programming), the NBA’s ratings at records – all of it is represented by Space Jam.

Now decades old, Space Jam exists for nostalgic wonder, the epitome of ‘90s wackiness, and forever stuck in a disappointing visual effects rut. Jordan so clearly exists in an unreal digital world, which is fine given the context, but he’s not an actor either. It’s ultimately an artificial, dead project whose enthusiasm comes from known novelty rather than what is. A Michael Jordan movie? That’s just as messy as Michael Jordan videogames like Chaos in the Windy City or In Flight.

Seeing through nostalgia is terrifyingly difficult, but there’s an unavoidable crassness to Space Jam’s infinite commercialism, revealing how much pop culture transformed into something salable instead of authentic. 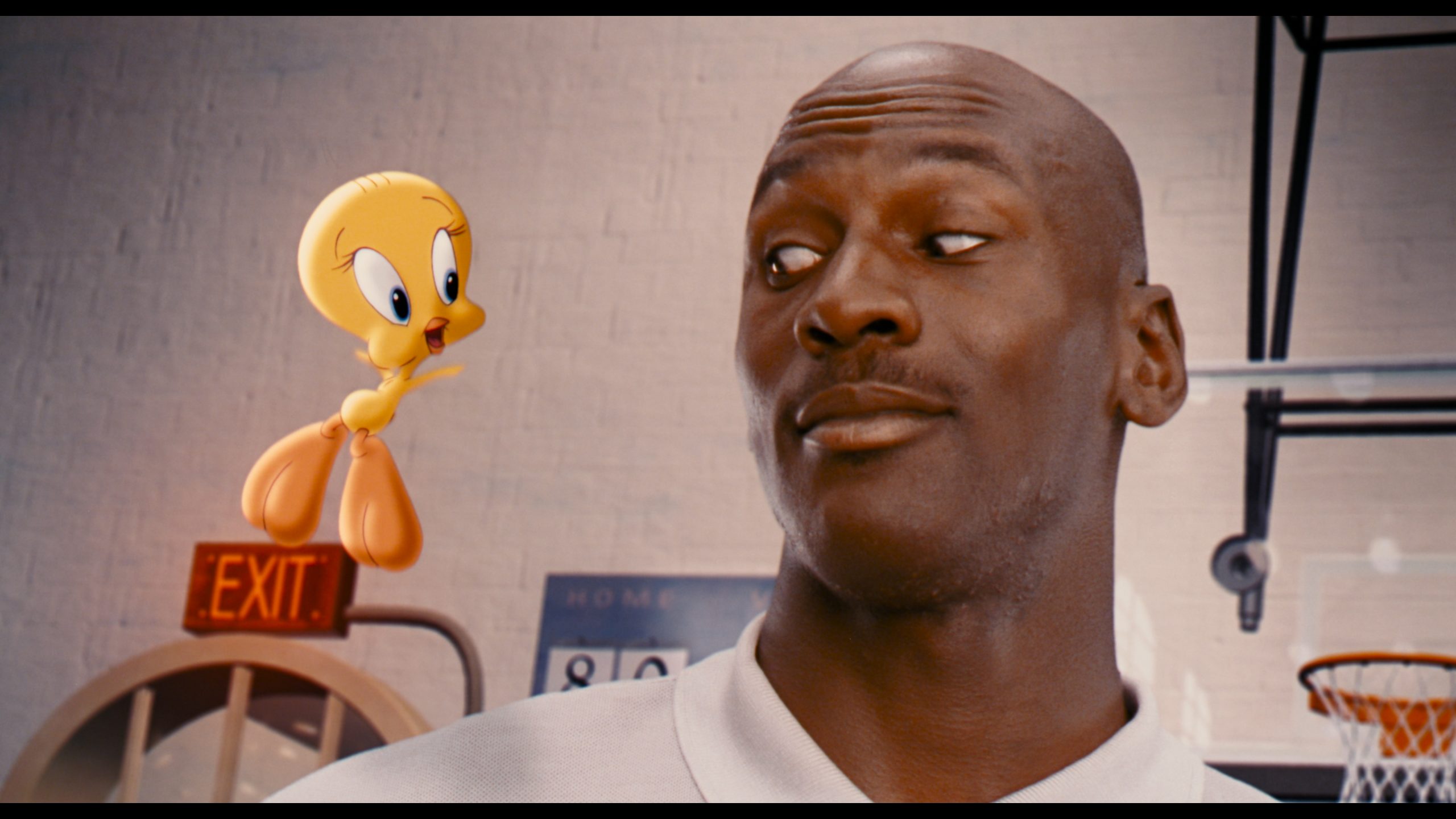 Live action elements, pulled from a 4K scan, look absolutely dazzling on this disc. The detail, the texture, the sharpness – all of it showcases the format’s best attributes. Being of the mid ’90s though, early CG elements show lesser resolution. Aliasing does appear, and there’s no fix. You can see lines on the court breaking up, along with other space-bound elements. Same goes for traditional animated objects, softer and less defined. Attractive, if blah. Composites (and Space Jam has a lot of them) suffer the same fate.

Given the aim at a younger market, the colors explode. Energy from deep color drives incredible reds and often glowing blues. The thinnest possible veneer of grain doesn’t cause problems even with the ballooning color. Seeing NBA footage from the VHS era look like this? Truly stunning.

Same goes for aggressive HDR, giving alien worlds a definite glow they didn’t have before. Space Jam’s vividness is enough to overcome the duller resolution and make this a worthwhile jump over the Blu-ray. Deepened black levels add the depth, and Space Jam comes alive visually. A slight drift into clipped whites is a small, insignificant bother.

Exacting in its approach to remastering this audio for Atmos, surround elements dizzy in their motion, swerving and diving like the best of them. Overheads go bonkers. Various spaceships, crowds, and other animated chaos fill the heights regularly. Discrete effects stretch even past their expectations. Hearing Taz zip between speakers as he spins up is magic.

While the low-end proves potent, it’s overly aggressive. There’s no nuance, the LFE rumbling yet lacking tightness. Hollowness ruins the bass, if not a fatality, then a lackluster output missing density. Loudness, just not accuracy.

A commentary (on both discs) is all for laughs. Featuring director Joe Pytka, voice actors Billy West and Dee Bradley Baker, along with Bugs and Daffy, it adds limited value. A promo for the original theatrical release and two music videos reside on the Blu-ray only.

A perfect embodiment of the ’90s NBA craze and the Looney Tunes final shot at the limelight, Space Jam is fine, but empty commercialization in the extreme.