It’s quickly obvious Another 48 Hrs is a sequel. In the first twenty minutes, there are two explosions. The first movie didn’t have any.

There are two ways to look at Another 48 Hrs, both sidelining the reality of being a beat-for-beat do over of the first. One concludes Another 48 Hrs lacks the mood and nuance that so defined 48 Hrs. The film’s racial component isn’t even glanced, and the comedy more misanthropic, but less distinctive. Buddy action comedies advanced, and so too did Another 48 Hrs to keep up.

Another 48 Hrs drives itself along a pre-defined route

In the second perspective, Another 48 Hrs drives itself along a pre-defined route, but embraces absurdity and with more Eddie Murphy to utilize, becomes a spunkier action movie, less about character. Another 48 Hrs does what studio sequels aim to do: the first film, only grander, louder, and slightly more self-aware. Nick Nolte acknowledges as such, beginning a bar fight by noting the overwhelming cliché.

Motorcycles jump through a theater screen, luckily landing in the aisle and not on the audience. Uzis unleash bullets en masse. Glass shatters as if Another 48 Hrs were attempting a record for the most broken on film. It’s not enough for a villain to meet their end after being thrown through a window. They need to land on a parked truck – filled with glass jugs.

Another 48 Hrs doesn’t feel as beholden to the 1970s more sinister action, the evolution of an entire genre visible between these two movies. Less grit, more sass. Less nuance, more boom. Looking for anything deeper than surface level buddy comedy and an older, curmudgeon cop means seeing Another 48 Hrs as an inevitably weaker sequel.

Yet, it’s frantic, lively, enthusiastic, and chaotic. Studio interference cut about an hour from the finished product, and that’s likely where the merit went. What’s left is an executive board room special, something suits know will churn a profit because it’s utterly empty and vapid escapism. It sells easily, and Murphy’s bankable stardom produces a fun fantasy, unrestrained from realism. Cinematic taste dictates whether that’s a loss or a gain. 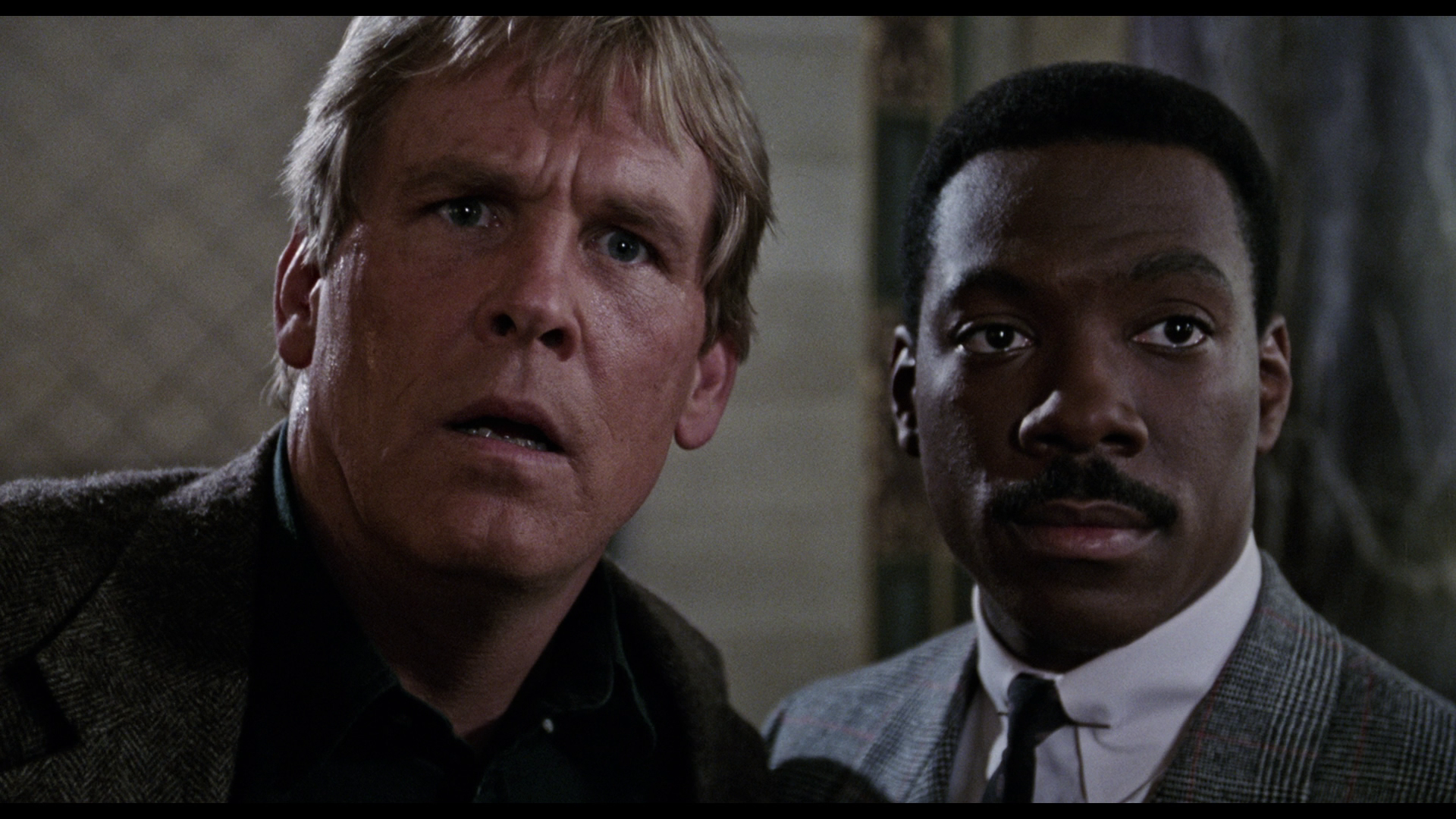 Great mastering work by Paramount for this release. The fresh 4K scan preserves Another 48 Hrs flawlessly. Damage is gone, dirt cleaned up, and the print completely intact. Transfer work keeps the grain tight, precisely resolved as to maintain the film aesthetic. Texture blossoms, from facial detail to the exterior grit. Impressive consistency keeps this going for the full runtime. Other than a checkerboard oddity during the opening credits (visible on the desert sky), there’s nothing to complain about.

One small note: There’s an encoding error on Nolte’s glasses at 25:58. It’s one block of digital garbage.

TrueHD 5.1 gives the action superb spacing, opening up with a motorcycle race, the track spacing riders through the rears as they pass. Gunshots add a little bass, and so does an explosion. That scene encapsulates the whole mix, naturally enveloping the sooundstage with the score and ambiance. There’s none of the hyper-accentuation evident in 48 Hrs’ sound mixing.

Stereos take equal prominence. Gunshots use those as much as the rears. It’s a wide split, naturally extending the visuals, and well suited to the additional action in this sequel. Smooth transitions sound completely natural no matter the direction. Deeper bass wouldn’t hurt, but for the first part of the ’90s, Another 48 Hrs has fun moments galore.

A new interview with Walter Hill lasts 14-minutes (he doesn’t discuss the various cuts/edits). Then, a trailer.

Copycat cinema in the extreme, Another 48 Hrs follows the same plot beats as the first, but with busier action and less aesthetic nuance.