Under Walter Hill’s direction, 48 Hrs becomes a distinct action buddy comedy. While the genre exploded in the ‘80s and ‘90s, none matched 48 Hrs’ authenticity.

Hill makes San Francisco look like Blade Runner, grimly lit by seedy neons, with sewers shooting steam to bathe the scenery in uncomfortable vibes. Nick Nolte’s gruff-spoken, chain smoking Jack Cates can only come from a place like this. He’s a cop who watched Dirty Harry as if a documentary, and lives by those same rebellious laws.

In flashes, 48 Hrs finds its own special “thing.”

It takes time for 48 Hrs to find the comedy; that’s all Eddie Murphy, the street smart, smooth talker who in later years, would’ve starred in this movie at the outset rather than Nolte. After vicious cop killings and victims lying dead on park benches, Murphy doesn’t fit like Nolte. Murphy’s playing a shrewd criminal, sure, but not one willing to pull a gun’s trigger as he points the weapon at his target.

In flashes, 48 Hrs finds its own special “thing.” Some buddy comedies use wit, some abrasive arguing. 48 Hrs has those too, but instills a clever racial component that sees both Nolte and Murphy forced into each others environments. For Murphy, it’s a deep south-themed dive bar, where Confederate flags make up the décor. It’s there where Murphy begins to define a routine that brought him to Beverly Hills Cop.

Nolte spends his time roughing up his impromptu partner, assuming the worst of everyone, particularly those plucked from prison cells. Murphy’s Reggie Hammond is spoken of only as “Convict,” defeating and depressing his whims so Nolte can remain the superior – at least in his own mind.

Together, the two share a genuine disdain for each other. Nolte is so aggressive and Murphy so sarcastic, there’s nothing playful about their relationship. That’s where Hill is able to fingerprint his style. The bickering makes for casual entertainment, but more so, separates the two protagonists in a city that’s ferociously cruel and uninviting; visuals match the contentious dialog.

When Nolte inevitably comes around, he’s genuine. 48 Hrs doesn’t demand much on-screen performance, yet there’s a truthful moment where apologies fly for racism and judgmental jabs. Every movie of this type has the same scene, but poking from 48 Hrs, it means more. In part, it feels like an apology to Murphy directly who isn’t given the room in his pre-stardom phase to spark his full personality into 48 Hrs. Given the intervening decades, that feels like a loss. 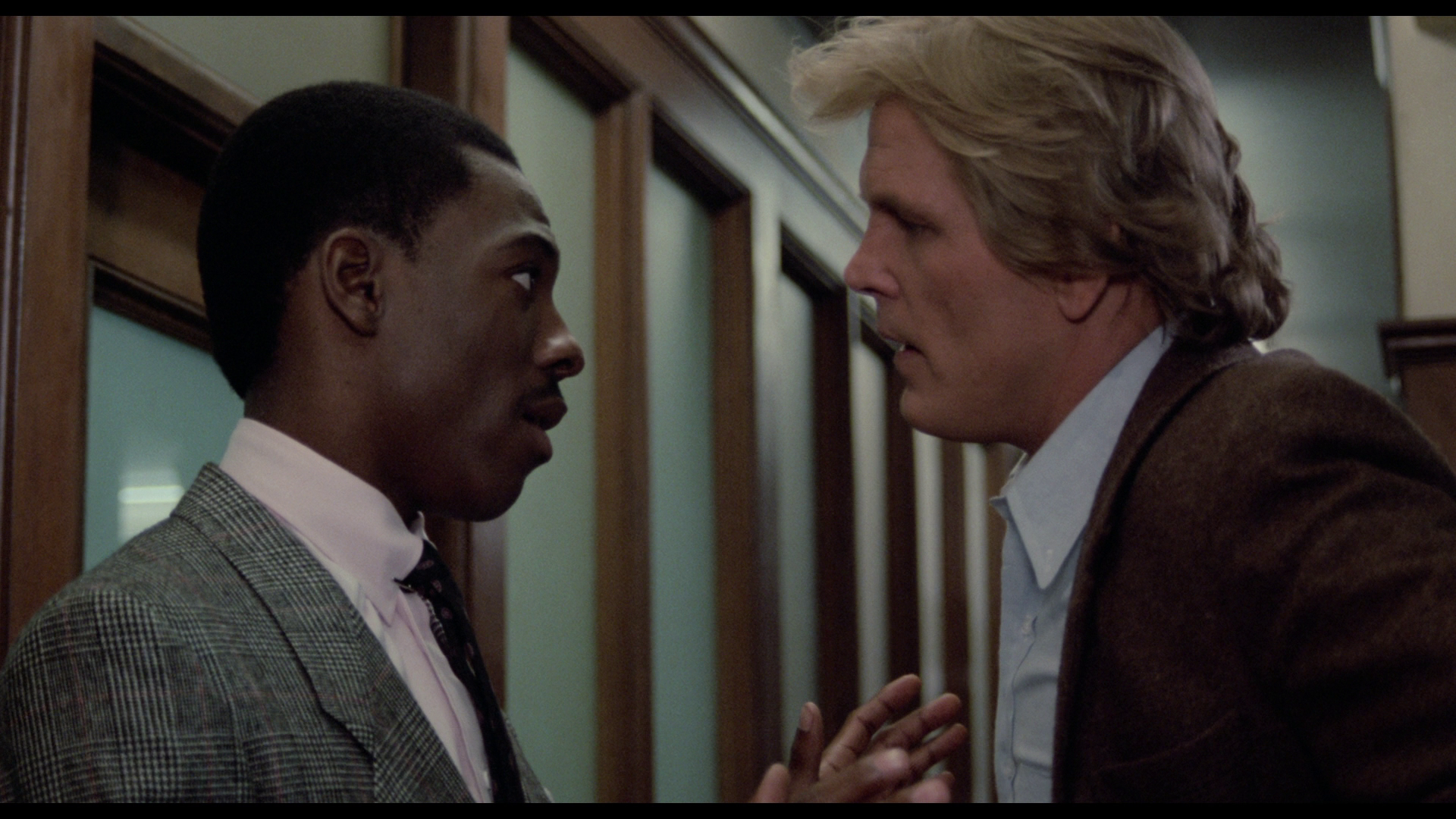 Newly restored for this release, Paramount offers a clean, well managed transfer for 48 Hrs. Grain varies, although never to a problematic level. The encode is stable and consistent, even when lighter black levels overexpose to reveal additional grain. For Blu-ray, it’s beautifully managed vintage stock, plus totally spotless.

Reinvigorated by a 4K scan, 48 Hrs doesn’t show superlative sharpness, but a natural veneer that allows firm, organic detail. San Francisco exteriors capture the city as it was in full, nothing missed. Higher fidelity elements like facial textures jump forward where the cinematography allows. Clearly though, this is an accurate, organic master.

Mirroring the touch of a hard action flick from the late ’70s, the reserved palette dries any primaries. Digital tools leave the browned hues as-is, saturation dull, even lifeless. 48 Hrs looks every bit its genre and era. Even contrast is lacking. Given how this looks, an HDR pass is unlikely to add much. Same goes for the dusty black levels.

Only available in a TrueHD 5.1 remix (an optional isolated score too), the original audio is far too emboldened. The way gunshots piercingly blare from the rears becomes a distraction rather than an addition. Discrete use is poor at best, making direction hard to track, even though they pump out higher decibels compared to the fronts. Sure, 48 Hrs features lots of surround action, but it’s overcranked. Shame the original audio mix isn’t offered.

A jazzy score drops to the low-end, the bass fine, or at least more in-line with the rest of the sound. It’s overall smooth and clean, no undue fidelity issues to point out.

Walter Hill speaks 20-minutes in a new interview, that followed by a trailer and the full cartoon short seen briefly in the movie itself.