Four times protagonist Hutch forgets to take out the garbage before the weekly pickup – a tiny, suburban, middle class sitcom funny. But for Nobody, it’s foreshadowing human garbage Hutch (Bob Odenkirk) will take out with precision. Violently. Cruelly. Hilariously.

Nobody is the best of its type since Falling Down. Where that movie leaned more toward tormenting the lower class, Nobody instead satirizes the American male fantasy, where the average dad can stunt a home invasion with a lasagna plate, massacre Russian fraudsters, and tackle a bus full of drunken ruffians.

Hutch spends the first act emasculated. A muscular co-worker chugs a protein shake, chastising Hutch for not beating a home invader with a golf club. There’s the neighbor enduring the loss of his father, but shows no emotion, just celebration over his dead dad’s car he’s now in possession of. Those are the guys who think they’re Hutch, the exacting male-centric fantasy Nobody is mocking.

There’s extreme middle class angst in Nobody. Again, same as Falling Down. Life’s drudgery in Nobody is told in repeated montage – Hutch goes on a run, arrives to work, punches numbers into a spreadsheet, and he’s back home to a loveless marriage. Then Hutch takes a bus ride, and Nobody reveals itself for what it is.

Nothing challenges the brain in Nobody. It’s not new or fresh. In addition to Falling Down, Nobody plays like a b-grade John Wick, only instead of a dog, it’s his daughter’s kitty bracelet. Odenkirk (with an assist from a deliriously funny Christopher Lloyd) totally, utterly, wholly gets it though. That’s the separator, and it begins with the bus.

Drunken 20-somethings take over the public transit. They ignore the rules, and make people leave. In slow motion, the camera zooms in on Odenkirk. His eyes don’t change, intense and focused, but a smile appears. The drudgery is mere seconds from exiting his life. This is his chance to punch punks in the face, to be the movie guy, and save the girl. So he does. Afterward, he celebrates with a perfect family in a perfect kitchen lit by a perfect sun. Testosterone saved his marriage.

Tone is so critical to a project like this. Odenkirk makes for exemplary casting in this context, rightfully ridiculous. And the violence is fun, both for Odenkirk and the audience, further cementing the fantasy by making all of this bloodshed seem desirable, not off-putting. Add in the flamboyant, karaoke-swinging villain, and Nobody’s mixture is all-too-rare cinema escapism. If it looks stupid, that’s the point. 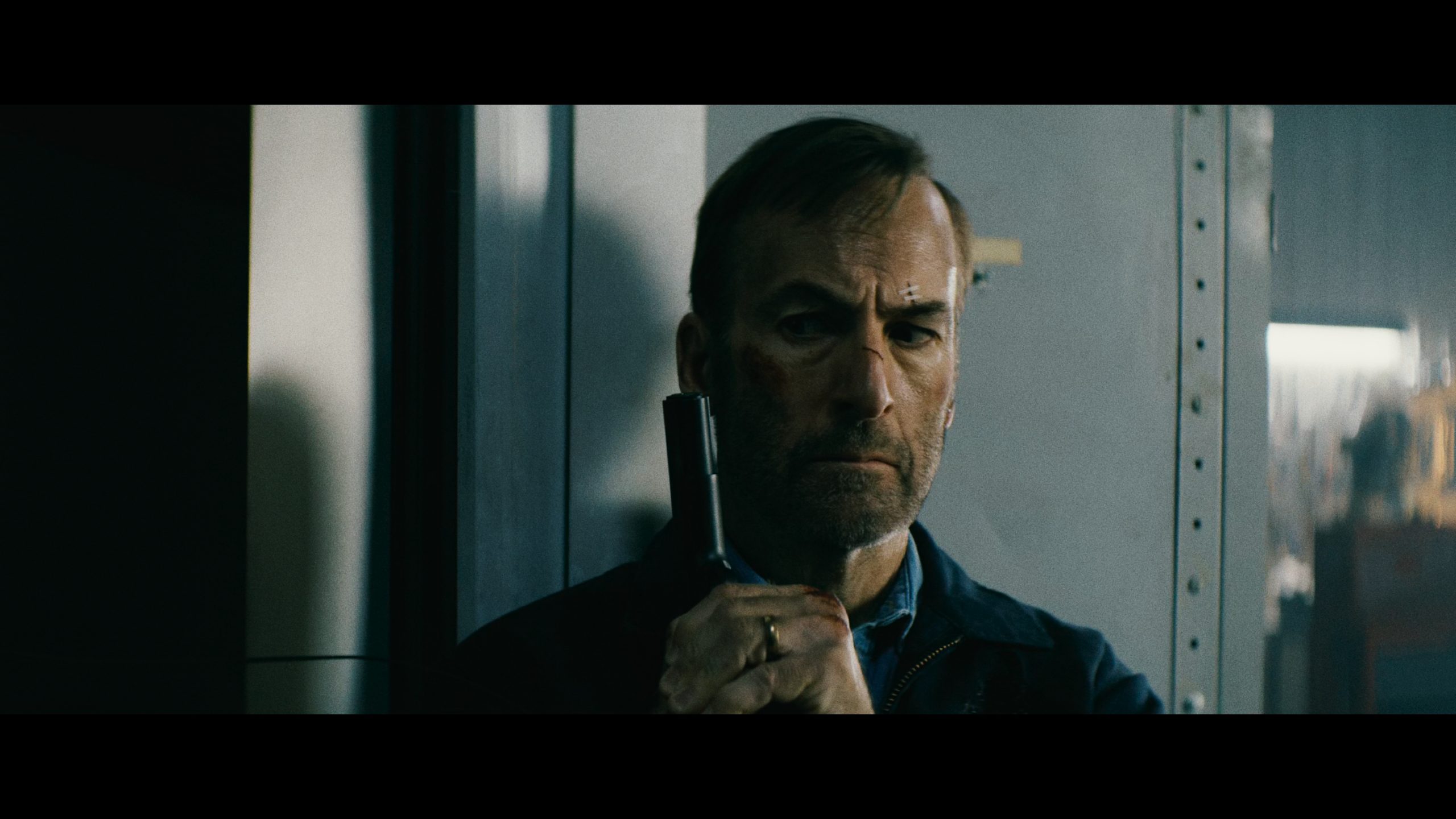 Color grading favors extremes, giving flesh tones a heavy amber hue much of the time. Things do push cooler, usually in contrast to the flesh tones. Saturation follows the needed aesthetics, with primaries given their due where possible, like red lights in a tattoo shop.

Graced with a Dolby Vision grade, Nobody flourishes in contrast, accentuating both light and dark. While not consistently so, sensational shadows dot most scenes. Light sources push their intensity, perky in brightness Dimensionality hits an early spike and doesn’t let go. Nobody celebrates boldness, loving the chance to soak itself in dynamic range.

Active Atmos does some stellar work, giving the personal fights a tight, close soundstage. Listen as a bottle smashes over someone’s head, the liquid splashing into the heights, then falling through the rears. Punches, screams, and yells jump from each channel as needed. It’s intense, matching the visual ruckus purely through audible means.

Inconsistent jolts in the low-end do push some rumble through the subwoofer, even if it’s not much. The soundtrack offers a powerful, smooth kick as required. Gunshots don’t produce anywhere near enough, and neither does a car flipping after an accident.

Both the Blu-ray and 4K discs house the bonuses, beginning the menu with deleted scenes that fall short of five minutes. A brief featurette focuses on Odenkirk’s training (nearly four minutes long). Four key action scene breakdowns run up a 20-minute runtime. A 13-minute generalized making-of has a few moments worth seeing given the set footage. Then come commentaries, Bob Odenkirk and director Ilya Naishuller on one, Naishuller solo on the second.

Nobody is utter nonsense and better for it, mocking the masculine fantasy of middle class dads turning into death-dealing home protectors.