Were a comedian considering a bit about Oscar bait movies, then one about Jeff Golblum playing a Jewish clown during the holocaust and forced to perform as a dog for a Nazi general is fitting. Add in grossly caricatured, mentally ill survivors fit more for a dark comedy alongside a weepy violin soundtrack for something that’s ultimately forced in its delivery.

For what’s required of him, Goldblum is sensational, the drifting, on-and-off German accent aside. Living with traumatic survivors guilt, his Adam spends days confined to a mental hospital, trying to work through his lingering stress, then helping others overcome their own. Adam is brilliant when his mind is clear, creating a dizzying back-and-forth between coherence and insanity.

Adam Resurrected makes it impossible to know or understand the intent

In depicting the Holocaust, director Paul Schrader mimics Schindler’s List, notably the black and white cinematography in such flashbacks, and a gruesome reminder of Jews being funneled into furnaces as the camera pans up to a smokestack spewing ashes. And yet, the tonality is eccentric. Seeing Goldblum act like an imprisoned dog, begging to see his family, should elicit emotion. Instead, it’s surreal, and all that fits to a Biblical finale – Adam making humanity right again, and a burning bush in a drug-induced haze.

Alongside Goldblum? Oddballs. There’s the nurse who also acts like a dog during sex, the woman whose hand is always raised, and the doctors who keep their distance from it all. Quirky, maybe, but projected as if a weird sequel to The Dream Team. It’s all so strange; Adam Resurrected makes it impossible to know or understand the intent. In attempting darkness, the movie can’t find an approach that works, because the resulting terror endured by the other patients is equivalent to Adam’s circus act in the opening chapter.

Adam Resurrected is a dud in thematic terms, losing its way early and failing to establish itself. Seeing Adam’s journey, Goldblum’s charisma a critical element, fails in conveying an inspiring recovery. Trying to instill any fun within a story linked to such morose Holocaust scenery is unforgivable. 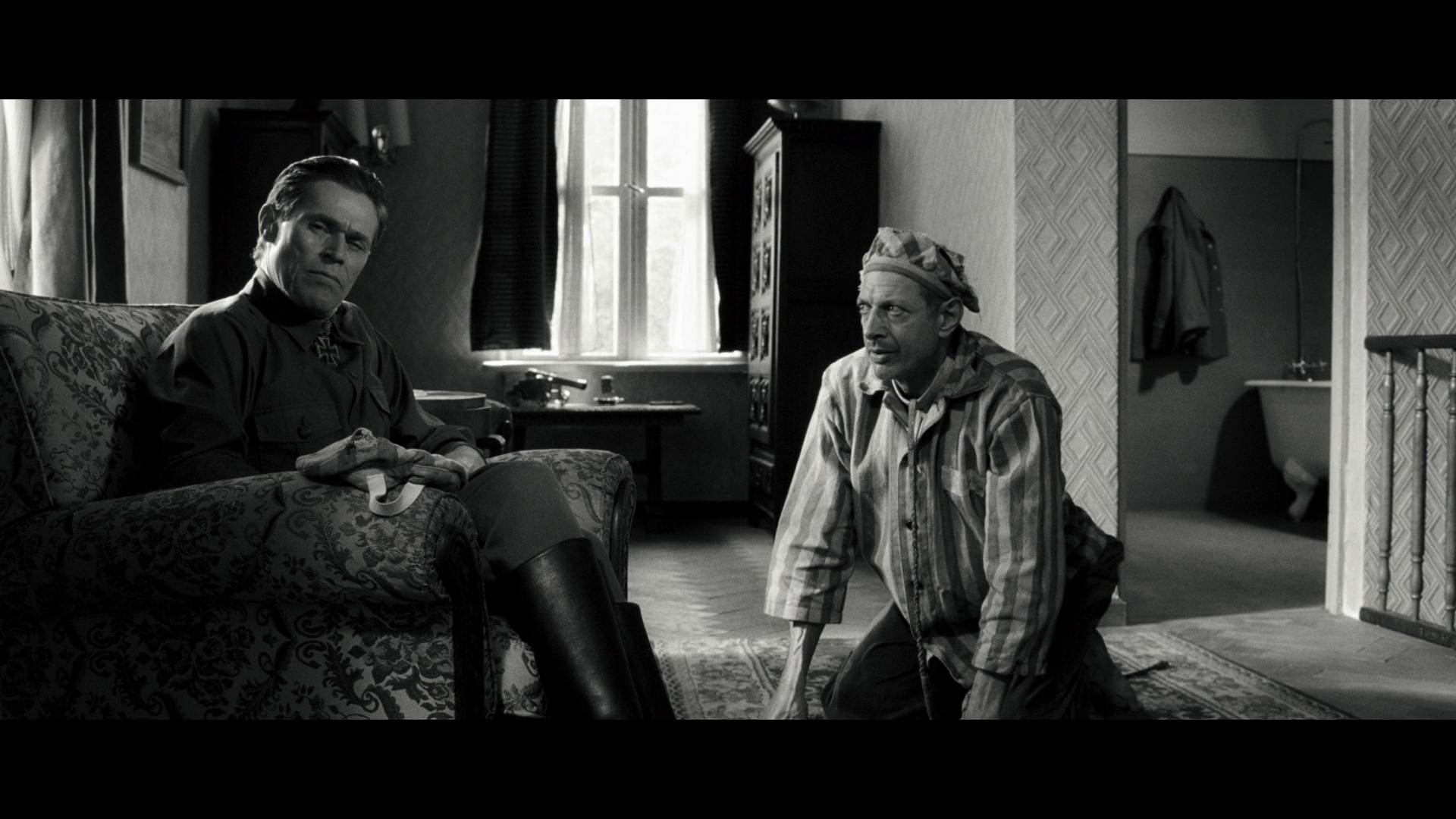 A mixture of sepia-tinged color and black & white cinematography, both look superb on MVD’s disc. Consistent between the two is a hyper-intense contrast, frequently blown out to extremes by design. So, it’s bright. A lot bright. Mucho bright. Clipping isn’t a bother as it fits the bleak tone.

Even with the vintage aesthetic, flesh tones hold true. Primaries reduce to pastels like powder blues. Adam Resurrected saturates only what it needs within the confines of a mental hospital. Pale walls and an overcast look fantastic.

Seemingly mastered recently, the sharpness looks impeccable, the hazier cinematography resolved perfectly by the encode. Intact grain maintains a filmic appearance throughout even through a few spikes in intensity. There’s enough fidelity in the source to impress, and certainly make gains over previous disc releases in SD.

Ridiculously quiet DTS-HD in 5.1 runs counter to the brighter PCM stereo. The latter is preferred because of it. Missing out on small low-end touches and marginal surround use doesn’t mean much. Rears add to crowd scenes by filling the soundstage, while the soundtrack drops some thick music stings on occasion.