Temple of Doom is saved by its opening and closing sequences. In the first, there’s classic klutz action, where an object (or objects in this case) scatters on the ground, mixed up, and kicked about. Then an ambitious transition to the sky, then sea, then land, all within 30-minutes, and barely any plot to speak of.

Then to close, a dazzling mine cart chase, so influential as to inspire an entire videogame generation to the point of cliché, into a flood, and then an iconic rope bridge stand off. That’s also near a half hour total.

One hour – that’s how long Temple of Doom spends on its memorable, throwback fantasy escapes, fights, and shoot-outs. This in a two-hour movie, leaving limited space for any genuine character and a complete loss of tone.

Were Temple of Doom the third Indiana Jones film rather than a fortunate middle child snuggled between two undeniable classics, there’s little doubt the derision it so deserves would turn increasingly sour. Instead, it’s lucky, partly for the action compositions and intensity, and because it matters little to the other two in this ‘80s trilogy (and Crystal Skull takes the heat now).

Kate Capshaw earned pages of criticism over her role. Yes, she’s obnoxious, but the fault lies more in backtracking on Karen Allen’s part in Raiders. Allen developed a woman capable of handling herself in a genre usually toting its manly credentials. Temple of Doom stays more authentic to the source material, drawing on helpless 1930s damsels, but now with a shtick that’s intolerable. Popeye’s Olive Oyl – in the first animated cartoons – offered more depth.

It’s a grisly, dark film too, if not as commonly stated, to a fault. There’s a small, critical moment where as a trap door begins dropping, Indy (Harrison Ford) has a chance to escape and considers as much. Yet, he stays because he can’t leave Short Round (Ke Huy Quan) stuck inside. That’s an empathy usually brushed aside in genre films, and critical to offset the cruelty toward children seen elsewhere in Temple of Doom. Jones carries a righteousness, true heroism rather than a self-serving hunt for artifacts. Without Nazis, Temple of Doom needs villainy still at that scale, and enslaving kids while sacrificing others by ripping out their hearts creates the needed balancing between sides.

But no one sacrifices Capshaw, so it’s a wash. 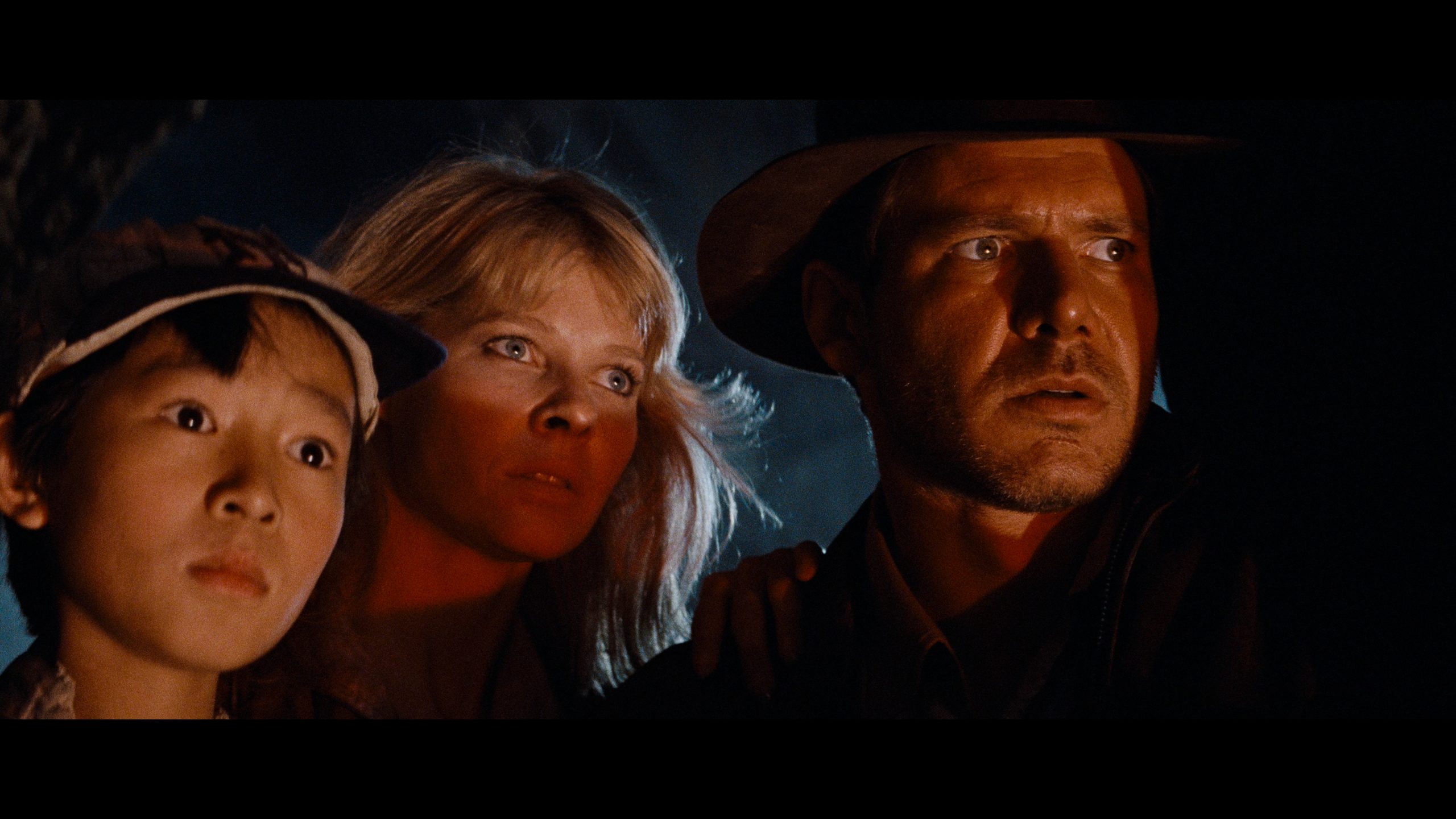 Temple of Doom’s immediate challenge is the nightclub, dressed in a hazy smoke. Paramount’s encode doesn’t average 100%, but it’s close, and that goes for other instances of fogginess too (the India arrival). The rest of the way, it’s impeccable. Precise grain replication allows the detail to explode. The texture is marvelous. Facial definition hits reference marks. Wide angles resolve equally, maintaining fidelity in droves, far more than Blu-ray’s capability.

Draping the screen in tight black levels, shadows reach a brilliant density. No crush either. Likewise, the enhanced brightness lets this movie excel under foreign sunlight. The way reflections glisten off water, even plants, adds a vibrancy that makes Temple look new.

Jungle ambiance spreads wide through this Atmos track, giving each speaker something to do. Heights, surrounds, and stereos all engage. Separation proves strong too, sending dialog to the sides as well as action. Gunfire dances around the soundstage effortlessly, and no audible signs of a remaster – it sounds as if this were always the soundtrack, especially John Williams’ score; that’s magical. Inside the collapsing ceiling trap, the gears churn into the heights as they drop, an impressive moment.

Subwoofer support runs drier, adding weight if not much. If there’s somewhere the mix shows its age, the bass is it. Small accentuation drives a little power. The score’s drums are given lift, rumbling a touch, enough to feel their impact.

The real treat comes near the end: the mine cart ride. Gunfire from the other carts, scenery passing by, ambient rumbling lava, screams, and the rest come together in an aural showpiece. Any doubts as to the accuracy of this mix dissipate the moment this starts.

Just trailers on the disc, but the box set includes an added Blu-ray containing numerous bonuses.

Indiana Jones and the Temple of Doom

Temple of Doom gets lucky in being confined between two genuine classics, offsetting its pitifully uneven story.