Fair criticism levied toward Raiders of the Lost Ark concerning the Nazis. They’re simple buffoons, evil, crass, and hateful, but lacking reality’s historical inhumanity. Or, as the term came to be, “cardboard Nazis.”

Yet, their idiocy gives Raiders of the Lost Ark one of its greatest tiny moments, wherein a capuchan monkey gives a Nazi salute, and the German responds in kind, quizzically as if knowing the asinine circumstance, but caught in his allegiance to the Fuhrer by instinct.

Raiders of the Lost Ark is a genuine screen icon

There’s the big Nazi, the one Indiana Jones (Harrison Ford) fights near a plane. There’s the sniveling Nazi Toht (Ronald Lacey) who slyly commands everything in the background. Plenty of lackey Nazis fill the scenery. Evil cinematic villains, if not so much honest.

That takes focus away from Raiders of the Lost Ark’s core plot of recovering Middle Eastern artifacts so the British can claim them for their own. That’s another thing entirely, but by Jones rescuing them from Nazi rule, circumstantially, it feels infinitely heroic.

While Jones himself is negligible to the story at large (yet another worthy Raiders discussion), he’s a pure movie hero, and Raiders of the Lost Ark is a genuine screen icon. The escapism overwhelms, yet never forgetting its characters. Jones begins mocking religious beliefs with a smug retort about Sunday school, then morphing his mindset into forced acceptance by the end. Marion (Karen Allen) needs rescuing in a broadly typical sense, but only after handling a heavy machine gun, blowing things up, and becoming an enjoyably comic nuisance to her captors. She can fight – and drink.

Unknowingly nudging the series toward the fourth entry, it’s said the Ark of the Covenant is, “not of this Earth.” Whether it’s ultimately spiritual or alien is up to individual choice, but the result is a surprisingly violent outburst in a movie that is, also, quite graphic.

Beginning the trek toward the PG-13 rating, Raiders of the Lost Ark suggests a Saturday matinee tone while relishing long, in-focus headshots, people smashed by cars, burning bodies, and unforgettably, melting faces. Much as the story avoids the Nazi regime’s worst offenses to mankind, it does make them die in gloriously perverse ways. In that, there’s broad satisfaction, the type a fantastic story like this needs to entertain endlessly, then leaving a mark on pop culture that few managed since. 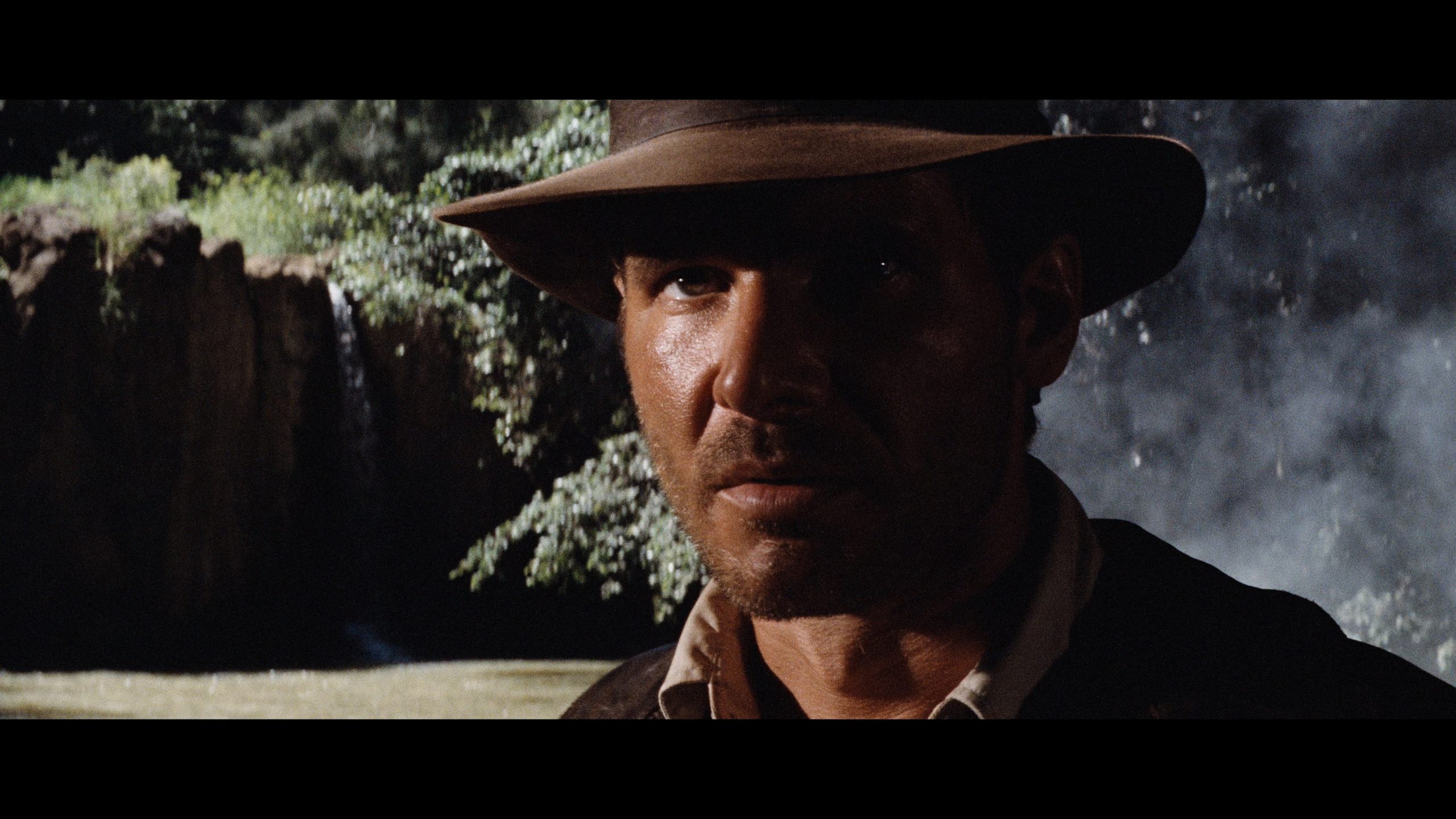 Improving immensely over the previous Blu-ray, Paramount’s 4K release benefits grandly from the Dolby Vision grade. Notably, that’s in color. Where the grading skewed obnoxiously orange, the subtler touch still gives Raiders of the Lost Ark a bold warmth, but it’s not unnatural. Flesh tones appear cleaner and purer, while jungle greens actually look green, not an off-hue. In other words, this looks like film.

In addition, gorgeous and precise grain doesn’t relent to any compression. It’s flawless. That means detail for days – weeks even. Sharpness brings out impeccable texture, facial definition and wide shots equally astonishing in their gains over HD. While a few composites let the perfectionism down (and tweaked marginally to hide matte lines), that’s unavoidable, even if they seem especially raw.

From the opening jungle scenes, it’s clear brightness pushes for a dominating presence, and that it succeeds. Sunlight spares nothing in its intensity, even if black levels wander a bit early on. That’s soon rectified, becoming a delight the rest of the way. Raiders glistens now.

Given a push into Dolby Atmos, the remastering sounds similar to the 5.1 track previous. Jungle ambiance, winds, and the score bounce between the fronts and rears. Extensions into the added rears aren’t common. Clearly, the original stereo mixing remains the most prominent. Overheads factor in on occasion, say falling rocks as traps trigger. Thunder strikes well too.

Low-end isn’t prominent, more a bland rumble. Expect a jolt when the boulder starts rolling and disappointment follows. Shoot-outs give gunfire small bite in the subwoofer, but standout more for their positional action. Bullets fly around exquisitely.

Just trailers sadly. Bonuses reside on an additional Blu-ray inside the box set.

Indiana Jones and the Raiders of the Lost Ark

Raiders of the Lost Ark doesn’t avoid its simple but rousing fantasy storytelling while keeping a focus on characters.