Although glossier and set within a 1950s surface-level America (initially, anyway), Kingdom of the Crystal Skull represents a change in series’ history. The enemy isn’t so obvious. Cate Blanchett is a figment of the Red Scare, but Indiana Jones isn’t as free anymore.

Before, Indy’s adventures happened without consequence. Now, he’s dragged into basement interrogation rooms, looked on as an untrustworthy oddity by government figures. Key to his character though, Jones (Harrison Ford) never stops trusting; he’s that force of good in a world turning sour. He’s willing to save triple agent Mac (Ray Winstone) because Jones is determined to keep faith even among those who wronged him.

In that way, Crystal Skull gets Indiana Jones. He’s an awkward hero, does things wrong, makes mistakes, but will also make right. That’s his purity. As for the rest of Crystal Skull… not so much.

Crystal Skull was the first entry of the internet era, drawing impassioned arguments and memes dissecting the mistakes. It’s not worth going through them again (nuke the fridge included) over a decade later, but there is the curiosity of why Crystal Skull suffered its fate so adamantly. Temple of Doom was equally a dud; maybe nostalgia blinders count for a lot.

That’s a central error in Crystal Skull, which too often plays to nostalgia that simply isn’t there. Making adieu about Harrison Ford returning, cranking the music, and sweeping the camera works once. The moment is gone, and Crystal Skull cannot be timeless. There’s also a too-obvious staged quality to the production, always concerned with placing people, props, and things in flawless cinematic alignment. This doesn’t match Indy’s own, “I’ll think of something” mantra.

Over time, visual effects gave films an endless grandiosity. No limits, no rules, anything goes. Crystal Skull sees that as a means to excess, but the resulting showmanship is rife with nonsense. It’s not so much Indy survives the fridge fallout – he survived jumping a raft out of a plane in Temple – rather the visible artificiality when it happens. Temple of Doom’s mine cart race was impossible, but it didn’t look so; Crystal Skull’s vine swinging looks every bit a cartoon. The tension is gone, the danger is lost, the worldliness evaporated.

For a defense, Crystal Skull’s characters function as needed. The same can’t be said for Temple of Doom; that movie lived on action. Crystal Skull is then a reverse, the action a mess, the people memorable. 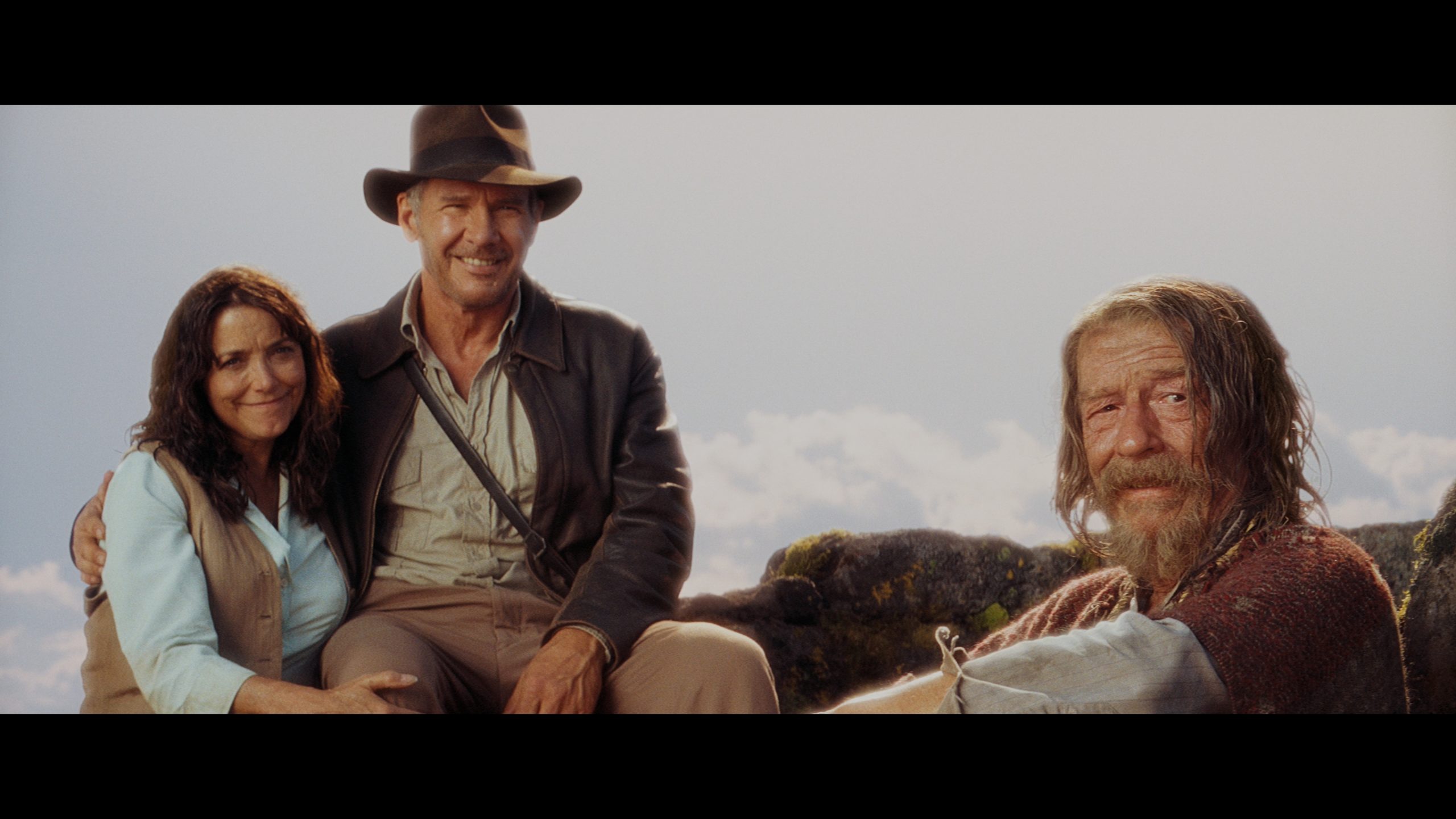 The newest movie in the set and yet the weakest one visually; that’s likely due to the CG effects. While noticeably remastered from a 2K finish to a 4K sheen, blame the lower resolution digital tools used to create the environments. Any untouched live action looks fantastic, precise, sharp, and generously textured. Imperfect – the original three still pop more – but defined.

Cinematography by Janusz Kaminski is identifiable as his style, namely the steamy, hazy aesthetic. Like Kaminski’s other projects, it’s great for HDR (or Dolby Vision in this case). Highlights glimmer and shine with grand intensity. Overall contrast is emboldened by this remaster, then given the assist from black levels. Those equally dig in, adding powerful shadows.

Graded for a sepia touch, the impact to saturation is noticeable but nominal. Jungle greenery still offers a potent vibrancy. Flesh tones keep their purity. The overall palette makes itself known, even after the warming hues.

Atmos naturally fits to Kingdom of the Crystal Skull, extending an already grand audio mix. Exceptional low-end gives appropriate power to gunshots and punches. The nuke hits with reference level might, shaking the room. A jet engine a few minutes later almost matches it. In terms of overall showmanship, the UFO launch offers a bit of everything.

Height channels engage often, tracking anything even remotely overhead. Rear speakers naturally follow on-screen action, sweeping between stereos through to those surrounds. Chase sequences are a blast, even the monkeys as Mutt swings from the vines. Ambient rain and thunder rip through the soundstage.

Just trailers, but the box set does contain a bonus Blu-ray with additional extras.

Indiana Jones and the Kingdom of the Crystal Skull

While indefensible in its action design, Kingdom of the Crystal Skull at least provides a solid character base to tell this story.