Race For Your Life, Charlie Brown is the third theatrical feature starring the Peanuts characters from creator Charles Schulz. It came out during the Seventies, retaining the simple charms of the beloved Peanuts television specials while neatly expanding the setting.

Charlie Brown and friends go to a summer camp far away from home, enjoying a grand rafting adventure that sees them get lost. The movie is everything good about Peanuts with its clean, wholesome fun highlighting Snoopy, Peppermint Patty, and most of the gang in a river raft race. It’s a natural extension of their neighborhood adventures that doesn’t feel forced and rarely drags.

Race For Your Life, Charlie Brown is the third theatrical feature starring the Peanuts characters from creator Charles Schulz

The Peanuts gang ends up in a rivalry with a group of bullies from the camp. They taunt Charlie and generally cause havoc, perfect antagonists for the simple adventure plot. A group of four boys led by Charlie form their own racing team, while Peppermint Patty thinks she runs a team, comprised of the girls like Marcie and Lucy. Sally does little else but complain. Snoopy and Woodstock of course enter the race with their own boat.

Race For Your Life, Charlie Brown clicks on all cylinders with the fun adventure. There’s a funny running joke with Peppermint Patty taking votes from the group for all decisions, lampooning her leadership skills. A few great visual gags are tossed into the mix, such as Schroeder carrying his piano around and then hanging it out to dry when he gets wet. Snoopy’s mischievous antics and competitive spirit are second to none.

While the movie doesn’t resonate with audiences quite like the beloved Christmas special, this is nevertheless a top-notch Peanuts movie. It’s the type of light, charmingly sweet, and nostalgic brand of entertainment that has made Peanuts characters household names and an enduring American brand. 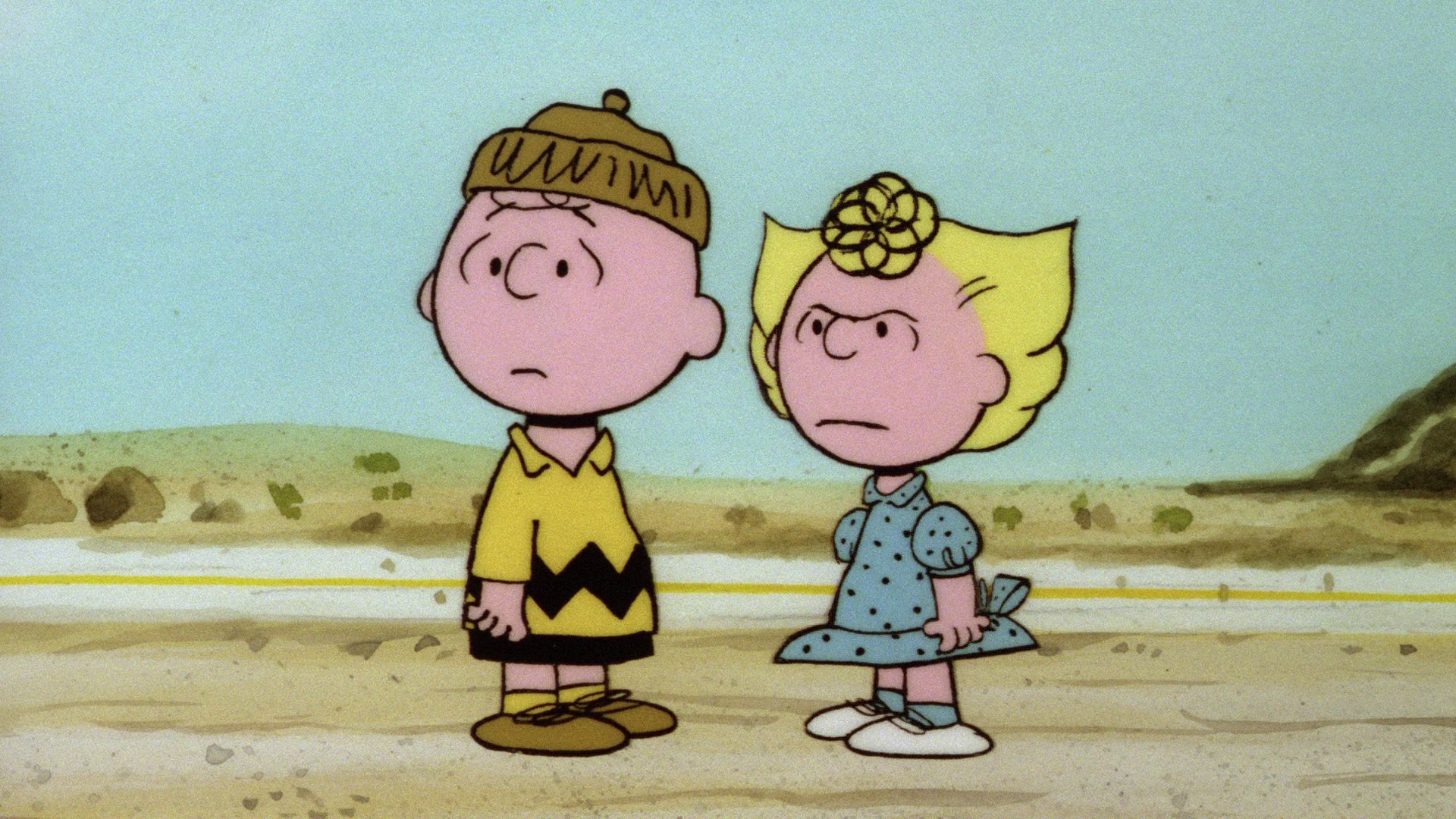 The main feature runs nearly 76 minutes on a BD-25, getting its own disc with a high bitrate AVC encode. Race For Your Life, Charlie Brown first came out in 1977, and the animation had tightened up considerably since the Peanuts gang made very rough animation debuts in the 1960s. The 1.78:1 presentation is a faithful, unfiltered representation of the movie’s traditional cel animation. The cel dust and speckles have been left intact, leaving a mildly dirty but organic film transfer.

The simple 2-D animation looks fairly good with visible grain and satisfying primary colors despite some drab touches. It’s not quite as vivid and vibrant as the follow-up film, Bon Voyage, Charlie Brown. The splashes of color occasionally pop thanks to the steady contrast and strong black levels.

This is not an amazing, pristine restoration from Paramount but a straightforward transfer that doesn’t get anything wrong. Dazzling eye candy has never been a part of Charlie Brown’s appeal but fans should be pleased by this fine upgrade over DVD.

The disc has a perfectly respectable 2.0 Dolby TrueHD soundtrack with adequate fidelity and ordinary dialogue reproduction. There are clear limitations in the source material. The original monaural mix isn’t particularly robust with its dated design, sounding like the original Peanuts television specials from the same era.

The big loss here is the absence of jazz musician Vince Guaraldi, whose memorable scores for the original Christmas and Halloween specials have been indelibly linked to the Peanuts characters. Race For Your Life, Charlie Brown goes in a different direction with a cheesy, forgettable pop score.

Optional English, English SDH and French subtitles play in a white font. A French dub is included in mono Dolby Digital. Those looking for Spanish options will have to stick with the 2015 DVD.

Race For Your Life, Charlie Brown makes its Blu-ray debut as part of the four-disc Snoopy Collection from Paramount. The movie is not available as of yet on its own. The Snoopy Collection gathers the four original theatrical movies for the Peanuts gang, which also includes A Boy Named Charlie Brown, Snoopy, Come Home, and Bon Voyage, Charlie Brown (And Don’t Come Back!!). It’s a bit disappointing that fans have to re-buy the first two movies which were already released on Blu-ray to get the second two.

The set is light on special features, bringing over a 2015 featurette from the Bon Voyage DVD and a couple trailers for the movies making their Blu-ray debuts. The four-disc set at least gives each movie its own BD.

The best bonus is the inclusion of separate digital copies for all four movies, redeeming in HDX quality on VUDU, FandangoNow, or iTunes.

Travels With Charlie: The Making of Bon Voyage, Charlie Brown (20:22 in HD) – A fine look back at the movie from a variety of perspectives. An animation historian, Charles Schulz’s widow Jean, and others intimately involved in the movie’s creation discuss its inspiration and gags. Apparently a trip back to Europe by Schulz after staying there as a soldier in WWII inspired the movie’s plot.

Race For Your Life, Charlie Brown Theatrical Trailer (02:41 in HD)

Race For Your Life, Charlie Brown

A wonderful Peanuts movie from the 70s starring the whole gang entering a raft river race up against bullies.

The 15 unaltered images below represent the Blu-ray. For an additional 47 Race For Your Life, Charlie Brown screenshots, early access to all screens (plus the 120,000+ already in our library), 120 exclusive 4K UHD reviews, and more, subscribe on Patreon.