After Jackie Chan’s pairing with Chris Tucker and then Owen Wilson, studio assumption by 2002 assumed that was the formula – and then chose to put Chan next to Jennifer Love Hewitt. Nothing against Hewitt who carries her own capable, goofy comedic charm, but against the Americanized Chan, that’s a senseless assault on the martial arts action genre.

Chan’s western super stardom waned after The Tuxedo, a few notables aside (sequels, primarily). It’s tragic really, that American directors and script writers couldn’t find consistent projects to showcase his skills before age necessitated a slow down. To think The Tuxedo was close to a last gasp…

To think The Tuxedo was close to a last gasp

There’s no room for natural charm in this movie. Every joke is forced, the premise ridiculous, the tone clueless. An entire sequence finds Chan accidentally knocking out James Brown, then taking his place on stage to do the act thanks to a high-tech super tux, the kind of plotline expected in a weekly cartoon, with the aesthetic of a Schumacher Batman movie. Accepting Chan’s athleticism and speed required a nonsensical sci-fi angle in producer’s eyes.

The villain is all about water, cashing in on a bottled water explosion that drew ire at the time. Although not a fresh product, worries about parasites in tap water (which happened in 1993) led to booming profits and the ability of companies to profit from selling readily available liquid. The Tuxedo casts Jason Isaacs as an unlikely, uber-rich CEO planning to dehydrate people so they splurge on his brand. Stupid, but then again, so is this movie.

Insert a flurry of spy movie tropes, Chan just an average taxi driver awkwardly placed in a fictional government spy agency. Equally naive Hewitt, placed in the field for the first time, manages to disassemble the water plot, improvising in unfunny ways. During a fight, she puts up her hands and does a Bruce Lee wail, selling this entire production’s attitude toward kung fu cinema. There’s no attempt to make the action funny, rather mock the action tropes themselves, while barely hiding the numerous stunt doubles that erase Chan’s casting all together. 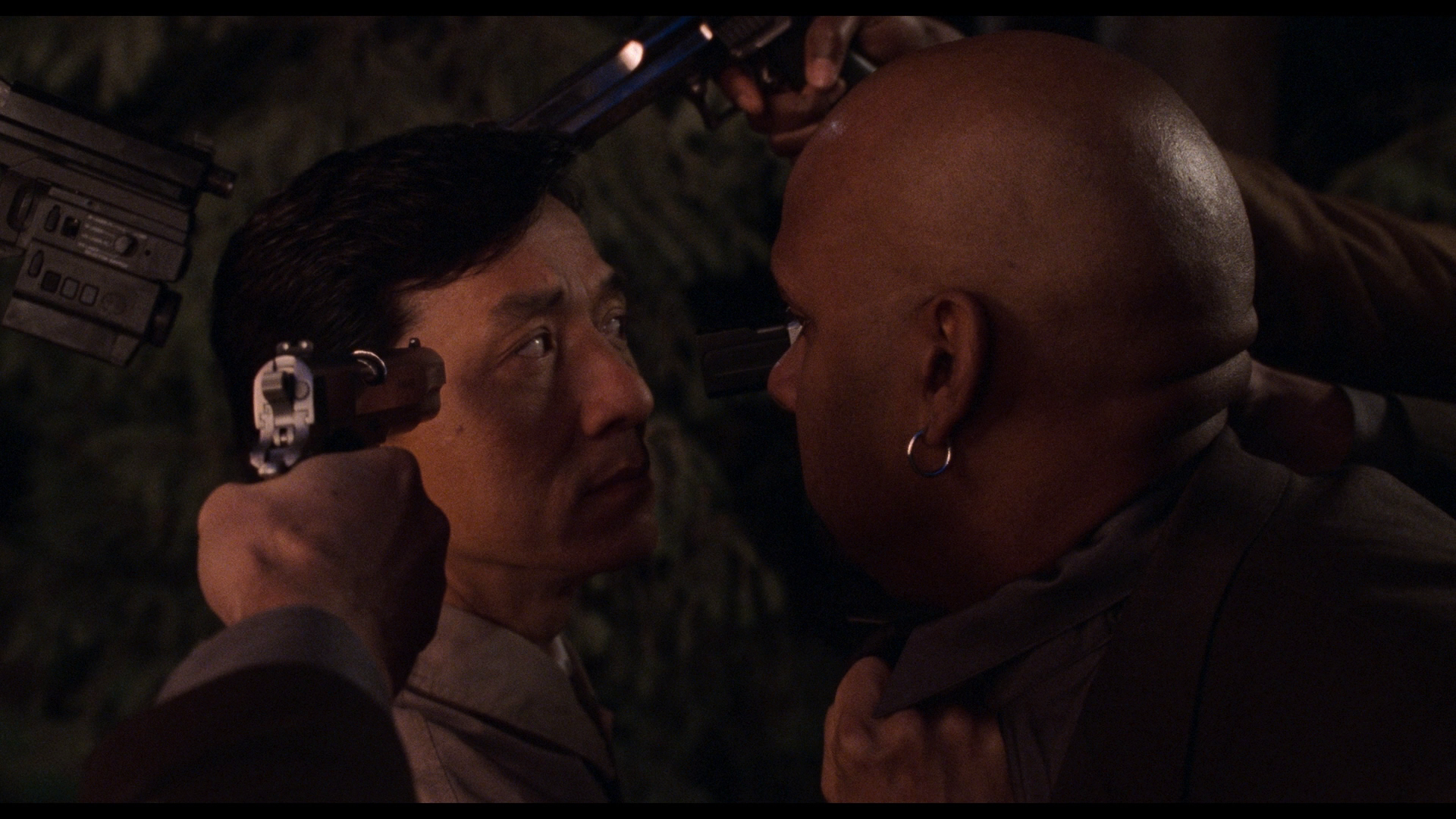 From the early color grading era, The Tuxedo takes on a firm, chilly look. Teal runs hard through the strict palette. That affects flesh tones, primaries, and even whites. Everything takes on a cool tone. A few night scenes add light warmth before settling back on blues.

Seemingly a recent master given the fidelity on display, strong texture is at a consistently impressive level. Facial definition looks spectacular, while exterior shots draw out the finer qualities. Fine grain fluctuates, usually resolved well. Some spots reveal the slightest noise, nothing detrimental, if visible to sensitive eyes.

Mixing doesn’t take full advantage of the TrueHD soundstage, notable early on as Chan drives his taxi through the streets, Directionality isn’t prominent, barely breaking the fronts to jump to the rears, and even then, stereos don’t show much interest in panning. There’s slightly more energy to action scenes. Swords whip through the air as they swing in one example, breaking through into each speaker.

Bland range flexes itself mostly through the electronic soundtrack that’s pure early ’00s. Explosions barely elicit a boom. There’s not much here, and The Tuxedo sounds more like a direct-to-video release.

An EPK and deleted/extended scenes, plus a longer set of outtakes than is seen during the end credits.

A dismal non-comedy that struggles for every laugh, The Tuxedo is one of the worst things to come from Jackie Chan’s American peak.

The 15 unaltered images below represent the Blu-ray. For an additional 29 The Tuxedo screenshots, early access to all screens (plus the 120,000+ already in our library), 120 exclusive 4K UHD reviews, and more, subscribe on Patreon.