A throwback of throwbacks, Super 8’s ingenuity isn’t revisiting ground once tread by Goonies or E.T.. Rather, it’s in giving them fresh emotional weight. Where E.T. focused its empathy on the benign alien, Super 8 puts that onto its human characters, all suffering loss and disconnect.

Super 8 is a movie about compassion, forgiveness, and letting go. A touch heavy and in the end literal, if no less beautiful as it is entertaining. Tragedy opens Super 8, an industrial accident in a town that on release in recession era 2011, hardly existed anymore. There’s the nostalgic hook, in addition to following monster kids as they paint miniature figures, build models, and film no-budget horror movies.

Genre films involving teens from the ‘50s and ‘60s treated the circumstance as rebellion, something to draw kids to theaters. Super 8’s generational divide treats the situation openly, and truthful. Joe Lamb (Joel Courtney) mourns his mother’s death. His father buries anger, unleashing frustrations on Joe and the man he blames for his wife’s gruesome demise.

Soon the town swarms with military. Fears over a Russian invasion easily authenticate the time period, and conspiracy-laden paranoia seeps into the city due to bizarre incidents. It’s so genuinely ‘50s in its mystery, yet the change over stems from a coming-of-age touch that doesn’t make the kids violent heroes who defeat the monster, but instead show their sorrow for the invader who wants to leave Earth. That’s E.T. through and through, yet Super 8 carefully layers the kids so they must overcome more than their fear. For Joe, it’s understanding his loss is shared – that moment everyone has where they realize the world stretches beyond their own perspective.

Matched with Michael Giaccino’s gorgeous score, Super 8 is able to convey kindness and gentle sentiment, in a movie about a city smashing monster that crushes people. The blending of comedy, terror, and warmth is so deftly done, few compare. Super 8 makes the heroes flawed but real, the villains cruel but set within real world anxieties. If there’s any reason Super 8 doesn’t break through into popular culture, it’s only due to how, on the surface, it so readily draws comparisons to Steven Spielberg and Joe Dante. Abrams’ voice comes through though, in his style and his feelings. 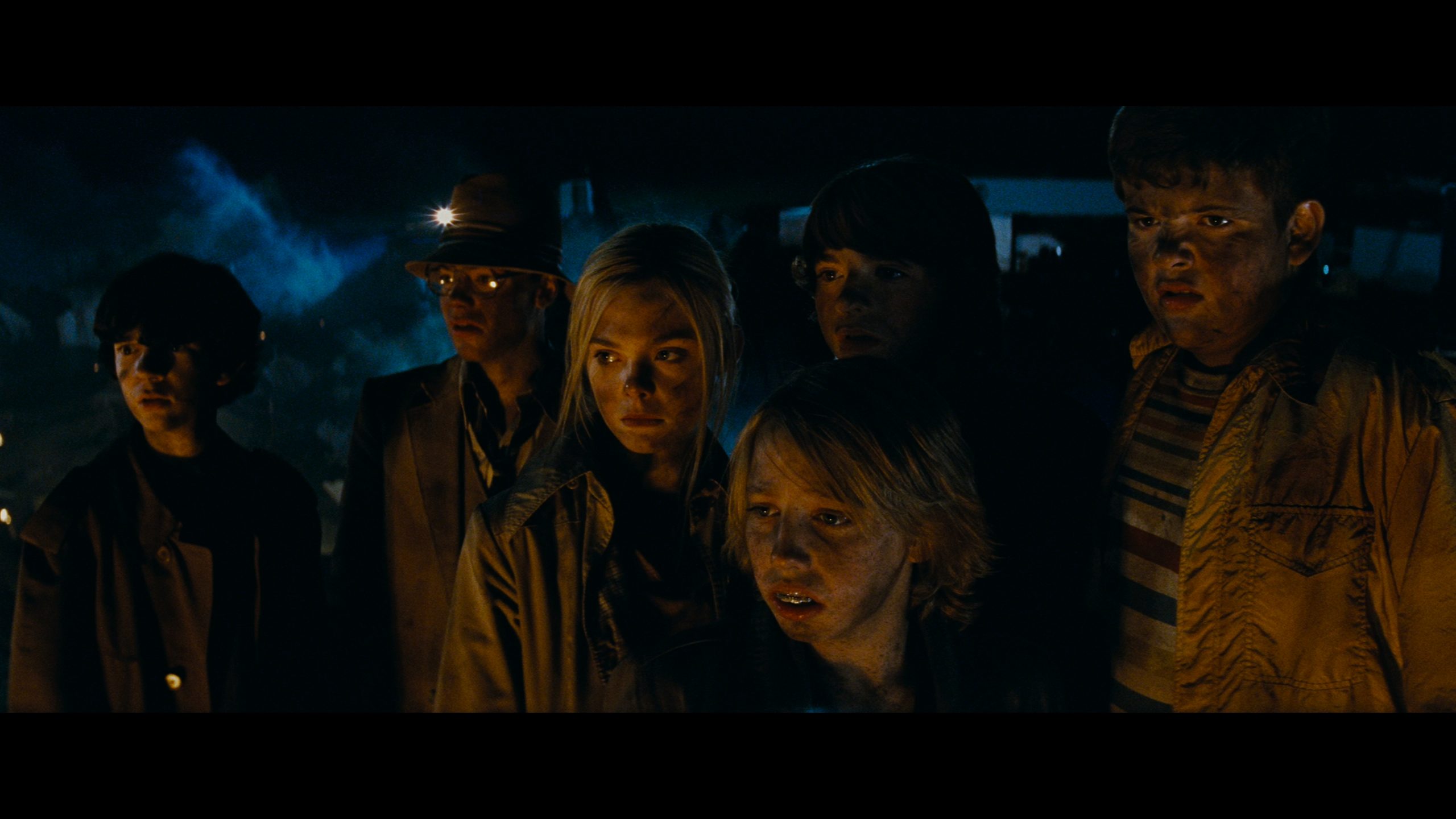 It seems Paramount didn’t remaster Super 8 for this release. The Blu-ray wasn’t rife with issues, although the few carry over. Notably, some ringing around high contrast edges at a distance; it looks lower resolution than expected for a 4K release, even an upscale.

Arguably one of the more disappointing non-remixes, TrueHD 7.1 copies the original Blu-ray instead of jumping to Atmos. Imagine the train crash rushing overhead…

Anyway, Super 8 hasn’t lost any of its aural might through the years. In 7.1 terms, it’s still monstrous, and the wreck still a sequence worth revisiting on the regular. Brutal low-end rocks the room, hitting the deepest tiers. Surrounds engage splendidly, each speaker seeing use, and the motion among the smoothest ever designed. Tank rounds during the major military strike create thunder, bullets sweeping the soundstage. The bus attack is equally brilliant.

Super 8 does more than action, using the stereos to track voices in busy living rooms, creature sounds before attacks, and other ambient splashes. The design feels wholly alive, consistently placing the listener in the middle of everything. Bemoan the lack of remastering, yet there’s no denying how potent this still is.

The UHD contains the same bonuses as the previous Blu-ray. A commentary from J.J. Abrams, producer Bryan Burk, and cinematographer Larry Fong makes for wonderful discussion. Eight featurettes are brilliantly produced with an actual sense of style while dishing out information, nearing the 100-minute mark total. Deconstructing the Train Crash is a winding interactive feature that details all aspects of the scene, from its initial paper scribbles to the post-production. While clumsy to load piece-by-piece, the depth is worth it.

Fourteen deleted scenes push 13-minutes, items that fail to add much other than exposition better explained in the final product

Clever and nostalgic, Super 8 finds a perfect cast of kids to rediscover the leftover charm from the ’80s, linked back to creature features of the ’50s.