Some movies are dumb fun while others are merely dumb. Spare Parts unfortunately falls into the latter category. The lame b-movie thriller from director Andrew Thomas Hunt is a confused attempt at body horror while poorly ripping off Mad Max Beyond Thunderdome. Cheesy in all the wrong ways with an uneven cast, it’s an uninspired and bloody mess.

The four members of Ms. 45, an all-female rock group, land up kidnapped by a bizarre cult after a rowdy performance. After being knocked out, they wake up to find their arms cut off and outfitted with weapons like axes and swords.

The young women are pitted in battle against various enemies in sadistic battles fighting for their very survival in a remote junkyard known as the Gridiron. All for the amusement of a man called the Emperor and his wacky death cult. The flimsy premise is certainly gory, delivering bloody violence and little else in the incoherent screenplay.

The biggest name in Spare Parts is familiar genre actor Julian Richings playing the Emperor, a twisted man that runs the compound. The primary protagonists are feuding sisters Emma and Amy, the two key members of Ms. 45 who receive the most focus.

Sometimes b-movies are enjoyable despite hammy acting and tepid writing when they run wild with their premise, bustling with energy. This is not the case in Spare Parts, a grindhouse misfire. Poor characterization, plot holes and messy low-budget practical effects produce a turkey. 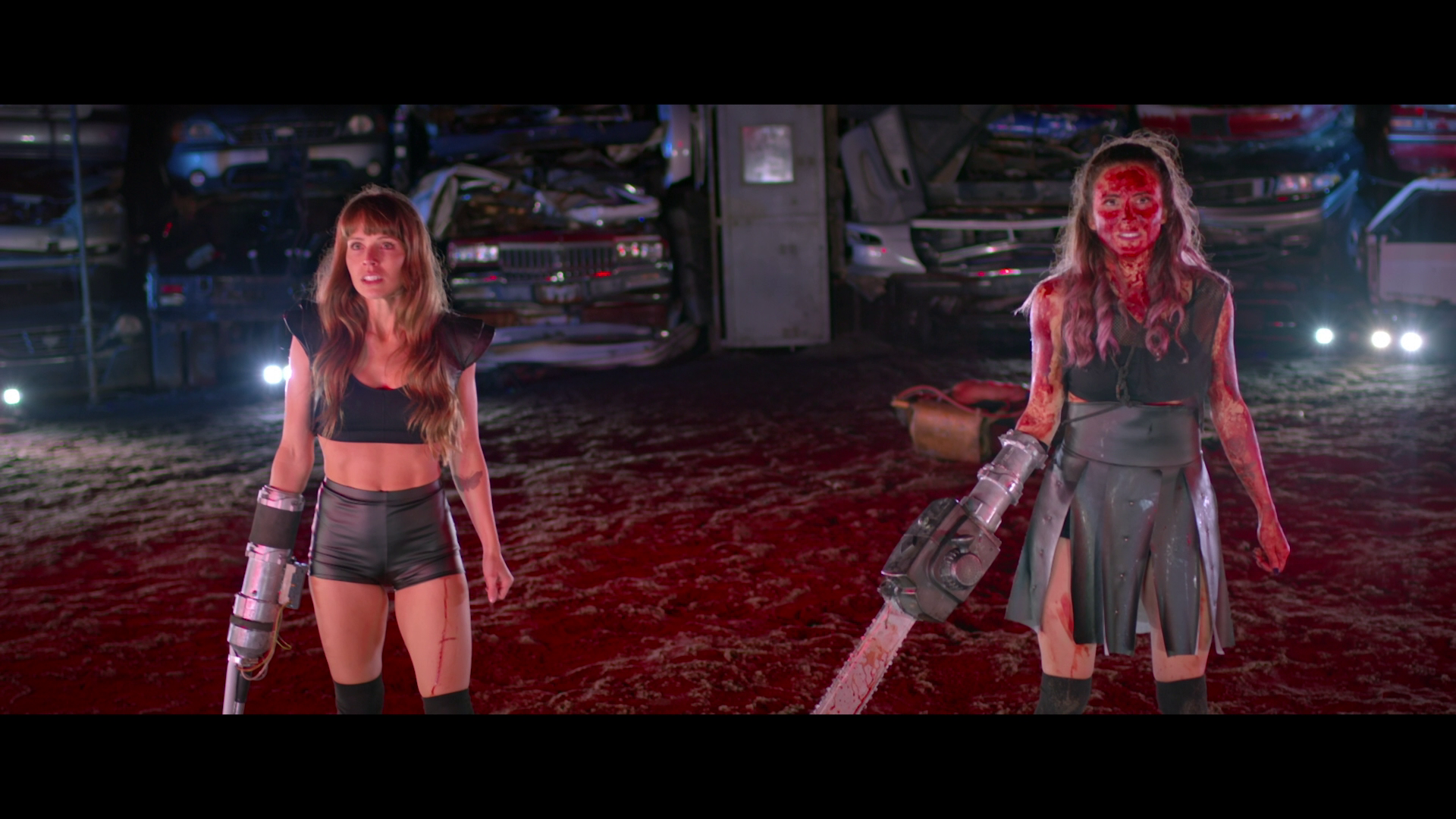 The pedestrian 2.39:1 digital cinematography reflects Spare Parts’ slap-dash approach to filmmaking. This is mostly unpolished indie cinematography made on the cheap.

The low-budget thrills and gore are clearly seen in decent 1080p definition and clarity. More questionable are the uneven digital grading and lighting choices, which bathe the palette with unnatural green and red pushes. Shadow delineation is hampered by occasional exposure issues with inconsistent black levels.

The strong AVC encode isn’t at fault. RLJE Films seems to have stepped up their normal encoding practices, upping the average video bitrates on a BD-50 with maximum transparency.

I think whoever authored this BD has made a mistake on the audio. For the first time in a (very) long time, the only audio is lossy 5.1 DTS-HD HR. Notice it’s not fully lossless DTS-HD MA as found on 99% of commercially released Blu-rays. It’s not a huge deal but the slightly lossy format is rarely used on Blu-ray and there is ample space on the disc, so there is little reason for the switch. The format hasn’t been used much at all over the past decade.

The 5.1 DTS-HD HR audio has a cheesy b-movie feel with outrageous bass and somewhat clunky sound design. There are adequate dynamics and some separation across the discrete soundstage. It’s a fairly basic surround mix with scattered directionality mostly pushed forward. Dialogue is cleanly reproduced with intelligibility. The raw musical soundtrack is open with high fidelity and excellent tonality.

Optional English SDH and Spanish subtitles play in a white font inside the scope presentation.

RLJE Films provides a very attractive, glossy slipcover for Spare Parts. The disc does have a few special features, including a director’s commentary with the film’s two female stars.

Audio Commentary with Director Andrew Thomas Hunt and Cast – Actors Michelle Argyris and Emily Alatalo show up in this mostly light commentary by the director.

Interviews With The Cast (11:31 in HD) – Actors Michelle Argyris, Emily Alatalo and Jason Rouse give interviews discussing their characters and the movie.

Behind The Scenes Featurette (12:06 in HD) – FX group The Butcher Shop shows footage from behind the scenes making the practical effects and make-up prosthetics.

In The Shop Featurette (05:08 in HD) – More footage from The Butcher Shop’s FX work.

Cinefest Sudbury Q & A (16:03 in HD) – A zoom call with the director and actress Emily Alatalo delving into the production’s history among other topics.

Fight Training Videos (12:07 in HD) – Test footage that was training for the blocking of the big club fight.

Behind The Scenes Photo Gallery

RLJE Trailers (04:49 in HD) – Three trailers play before the main menu: The Furies, Monster Party and The Barge People.

Gory premise falls apart for a variety of reasons despite a few cool visuals.

The 15 unaltered images below represent the Blu-ray. For an additional 23 Spare Parts screenshots, early access to all screens (plus the 120,000+ already in our library), 120 exclusive 4K UHD reviews, and more, subscribe on Patreon.