Where the gangster film once concerned police chasing down mobsters, the ensuing decades turned the guilty into folk heroes. And, as looser censorship allowed for it, increasing, marketable bloodshed.

Then came The Sting, bucking those trends in a delightful, whimsical way that still features criminal folk heroes, minus the shoot-outs and more almost cartoon-esque foot chases.

It’s not that The Sting creates empathy for swindlers Henry (Paul Newman) and Johnny (Robert Redford), but rather makes their mark a despicable person, elevating the con men’s stature. Plus, the duo pair flawlessly on-screen.

The Sting takes a tweaked, if honest look at depression era city living

There’s a method in portraying Chicago that’s atypical too. Either Chicago in the ‘30s loads the streets with Tommy guns, or it’s idyllic Americana. The Sting takes a tweaked, if honest look at depression era city living. As the con takes hold – all in the open – men sit on curbs, hopeless and jobless. Bread lines form and scuzzy entertainment venues lack customers. Yet, the aesthetic is almost Normal Rockwell. This lets The Sting wander through an almost comfortable crime as Robert Shaw’s arrogant Doyle Lonnegan can’t help dig himself deeper.

The Sting isn’t about the ludicrously deep, all-bases-covered scheme, with an obvious finish duping no one (anymore). Instead it’s a movie about smart guys getting one over on the rich,  and helping the disenfranchised crawl out from under their debts. Henry interviews a few oddballs to take a gig rigging a fake gambling den, one walking into the office with no experience and a broken nose. He’s hired, because deep down, Henry’s a good guy. Johnny too. There’s no sense Lonnegan is, a perfect screen heavy.

Ask whether sitting at a real world poker table with Henry and Johnny would be worth it, even knowing the coming sham – the answer is yes. The Sting succeeds because their smoothness is often imperfect. They worry, they panic. They’re real as a result. Unlike the comparable Ocean’s 11, The Sting lets its stars show faults amid a historical economic downturn. Much as The Sting wanders through an ugly period, it’s purely American in how enterprising men can make it all work for themselves, conquering the grossly rich through learned, gutsy street smarts. Watching it happen is pure Hollywood. 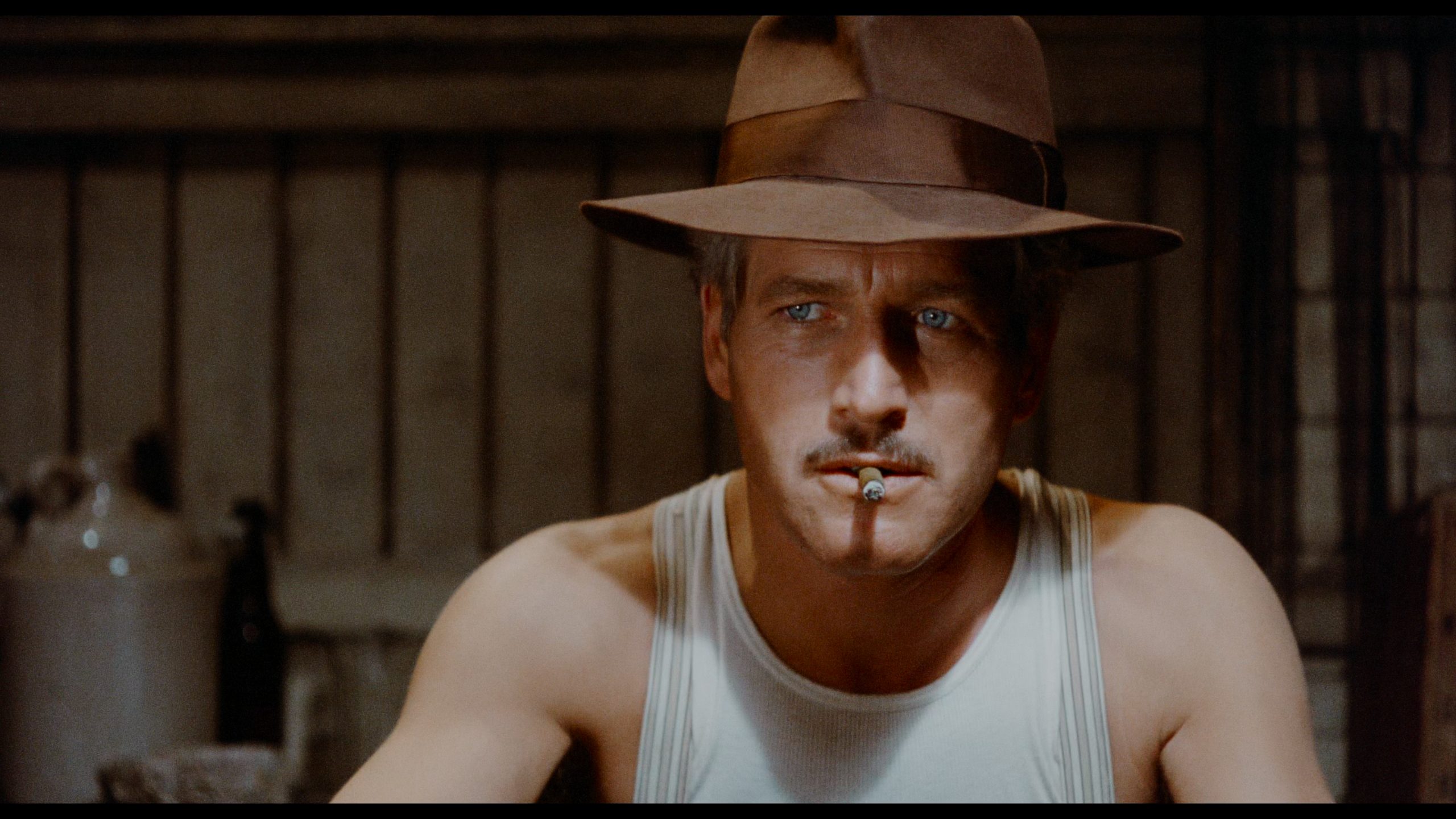 While the grain sticks around, Universal’s encode isn’t up for it. That’s a shame. Visible chroma noise and artifacting chips away at The Sting’s veneer. This is prominent at distance. Look at the long shot at the stage as the woman dances at nine minutes. A little haze hangs over the scene and blocking suffocates the shot. The 4K gains disappear. A walk through a smoky bar around 43-minutes is a real mess.

Saturated in gorgeous brown tones, deep color makes a significant difference. Additional colors pop like reds and yellows adorning buildings. But, it’s the dense browns, auburn, and burgundy suits that sing thanks to this tech. Careful as this palette is, the restrictive choices look wholly organic – no digital grading tools visible.

HDR makes itself known too, critical during dark alley meetings. Impeccable shadows hit the purest black. While not conducive to showing detail, the depth gains are undeniable. Generous highlights break out, giving The Sting a prominent glow that’s attractive and natural.

A 5.1 mix only, in DTS-HD, that does wonders to the bouncy music. Stereos breathe freely with the low-end accentuating the heavy drums. There’s modern weight behind this audio. Age doesn’t matter, whether regarding the music or dialog. The crispness is impressive for something this age.

There’s nothing happening in the rears. Maybe some score bleed, but it’s minor. This mix stays front-loaded, a couple minor stereo effects the biggest split.

On the UHD, Universal includes the three-part Art of the Sting, lasting near an hour. It’s dated but informative. For Universal’s 100th, a feature on restoration runs nine minutes, a peek into the 1970s hits 11-minutes, and a backlot tour goes a little past nine too.

Newman and Redford sell The Sting’s depression-era swindle with class, grace, and mountains of charm.