It’s no accident Warner dug Isle of the Dead from their vaults in 2021. The Karloff-starring RKO psychological horror effort finds the star isolated on an island, quarantined because of a plague, where people cannot shake hands or gather in groups over infection concerns. What timing.

That benefits this wartime genre movie, helping lift its sluggish pacing and low-budget production values. Karloff is the reason to watch, beginning the film somber about a Greek conflict in 1912, but also smiling and laughing, playing against type for the first act. It’s wonderful to see the man so friendly, even jovial rather than stuffed in makeup, or playing crazed doctors.

Isle of the Dead looks every bit the rushed, copycat, double bill filler it is

Isle of the Dead descends Karloff toward madness. The dialog poses unique arguments about belief, science, and myth. Seemingly an atheist by way of his wartime experience, Isle of the Dead slowly erodes his steadfast beliefs. Mania takes hold, and from him, filters down onto others who share his fears. Valued often only for his ability to form eerie stares, Karloff here transforms over time, a genuine arc that seeps into the film’s subconscious.

The struggle for Isle of the Dead consists of everything away from Karloff. Co-star Ellen Drew plays the usual screeching young woman, although this time accosted by a belief she’s a Greek vampire. Different, if not enough to change the story’s general form as an uneventful, dry tale. Nothing happens, dragging the short runtime into something that feels twice as long. At first, it’s evocative. Karloff walks through a battlefield, dead soldiers lining the road, others carted by the dozens toward mass graves. That’s eerie, and for a WWII era audience, unsettling certainly. Once on the island, Isle of the Dead looks every bit the rushed, copycat, double bill filler it is.

To the script’s credit. Isle of the Dead ends on ambiguity. Maybe the myth was true, maybe not. Karloff’s turn creates a changed man until the last, a chilling final act – maybe 10-minutes worth – that adds mild intrigue to this plain affair. 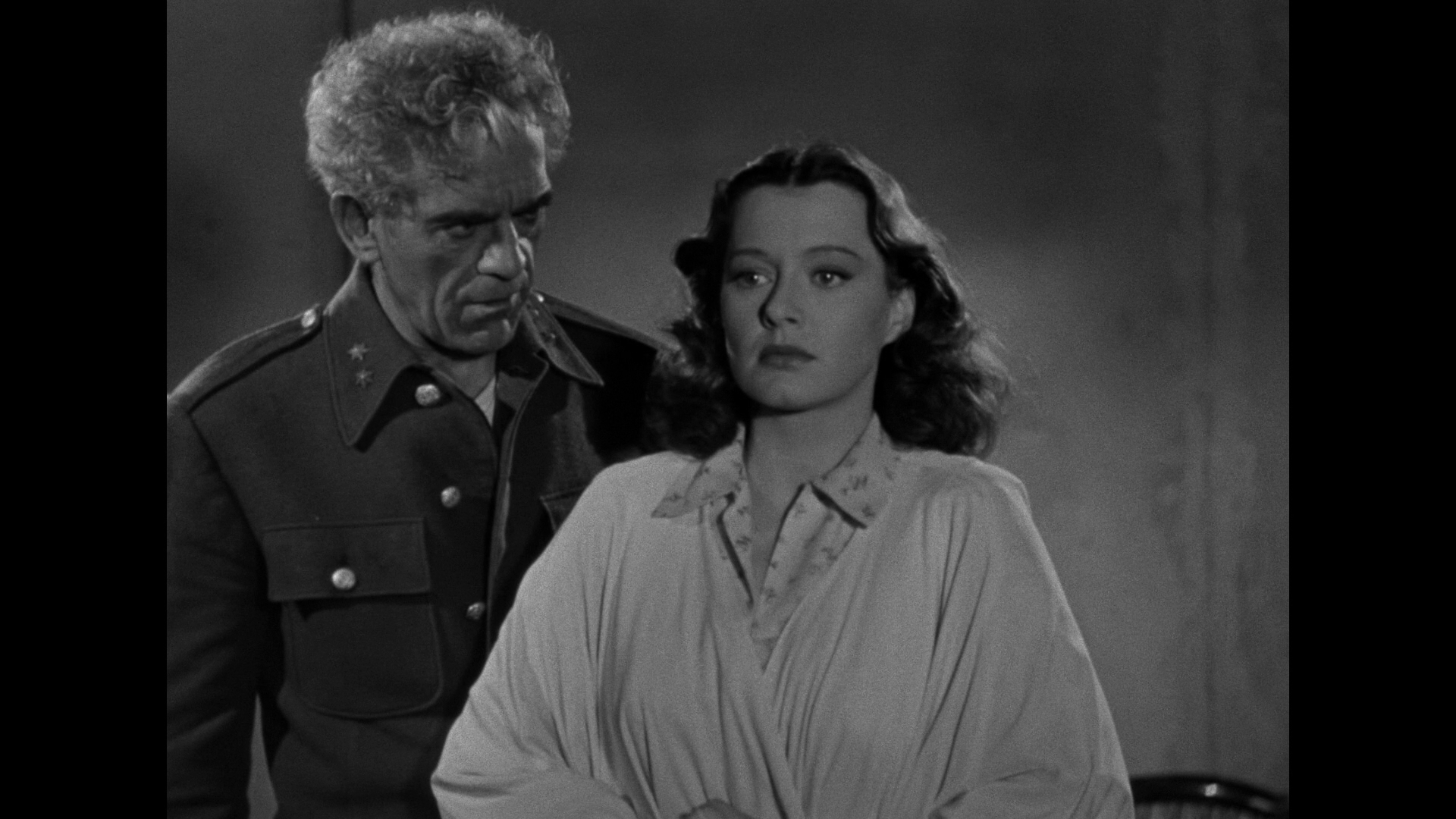 Sporting an incredible, pure, and gorgeous grain structure – maybe one of the best for something this vintage – Isle of the Dead looks marvelous. Warner’s compression proves spotless. A faultless print defies age, suggesting a premium, costly restoration unless the film stocks were impeccably preserved.

The resulting sharpness and texture makes Isle of the Dead look practically new. Other than soft focus, detail jumps from the image, resolving cloth, hair, grasses, and more.

Glorious gray gray scale matches the intended fright via stellar shadows, generous in blacks, perfect gradients, and perky highlights. Contrast establishes itself early, as does the dimensionality. For black and white material, this is reference.

Equally pure is the DTS-HD audio, freed from scratchiness or static, along with firm dialog reproduction. Other than the score’s highest peak treble, it’s a distortion-free presentation, that highest grade mono that makes a case for how superlative catalog audio can sound even in this era of Dolby Atmos/DTS:X. It’s not all about directionality and killer bass.

Dr. Steve Haberman provides the commentary, followed in the menu by a Spanish subtitled trailer.

Isle of the Dead

Interesting for Karloff’s performance and ambiguity, Isle of the Dead doesn’t have the energy to make use of either.

The 15 unaltered images below represent the Blu-ray. For an additional 16 Isle of the Dead screenshots, early access to all screens (plus the 120,000+ already in our library), 120 exclusive 4K UHD reviews, and more, subscribe on Patreon.