In-between comedic interludes, hokey family in-fighting, and Anita Mui’s screeching tributes to Lucille Ball, Drunken Master II develops a deeply nationalist historical drama. It’s not the focus – that’s entirely on Jackie Chan stumbling through life – but a key component regardless. Brawling happens due to British turn-of-the-century colonialism, and the English who steal artifacts for their own gain, robbing the Chinese of their visible heritage.

A sub-plot concerns a factory, set-up for the eventual finale, but threaded in as evidence toward British cruelty. The villains are those Hong Kong citizens who acquiesce to outside rule, commanding the workers to produce materials faster, denying them pay to preserve overseas profits. In their high-profile suits, standing on a raised platform looking down on the dirtied, sweaty workers, the visual is a firm one. Those siding with the British see themselves as superior, seeking a payout that doesn’t require working among hot coals and steel. They trade culture for personal gain.

Chan’s Wong Fei-Hung delivers this in a breezy tone, often comical if not without serious moments. He’s a problem child of sorts, although clearly too old for such a part (a mere nine years younger than on-screen parents Mui and Lung Ti). Ensnared in this messy international incident by accident, Wong’s determination to fight is something few share, an example of Chan’s flaunted (and criticized) patriotism years later.

Few share Wong’s interest in saving trinkets. Even his realization takes time, notably a pointed, precise dialog exchange at the midway point examining the effect of losing even tiny items to other nations. Then Wong understands, and his resulting fury leads to a magically composed genre climax. Set on fire (twice), crawling across (real) hot coals, and bouncing off concrete floors, Drunken Master II’s finale improbably bests the masterpieces that came before in the story.

There’s a grandiose bar brawl against 100+ gangsters, leading to the building’s total destruction. A market contest involves a stool turned into an impromptu weapon. Shredded bamboo causes gallons of blood loss, if still maintaining the actor’s trademark charms when in conflict. That’s key, because while not all of the humor or drama translates (Lung Ti’s verbal and physical abuse is grueling to watch), tone keeps Drunken Master II enthusiastic and perky. The fun factor doesn’t die out between the choreography, and in terms of consistent liveliness, this is among Chan’s best. 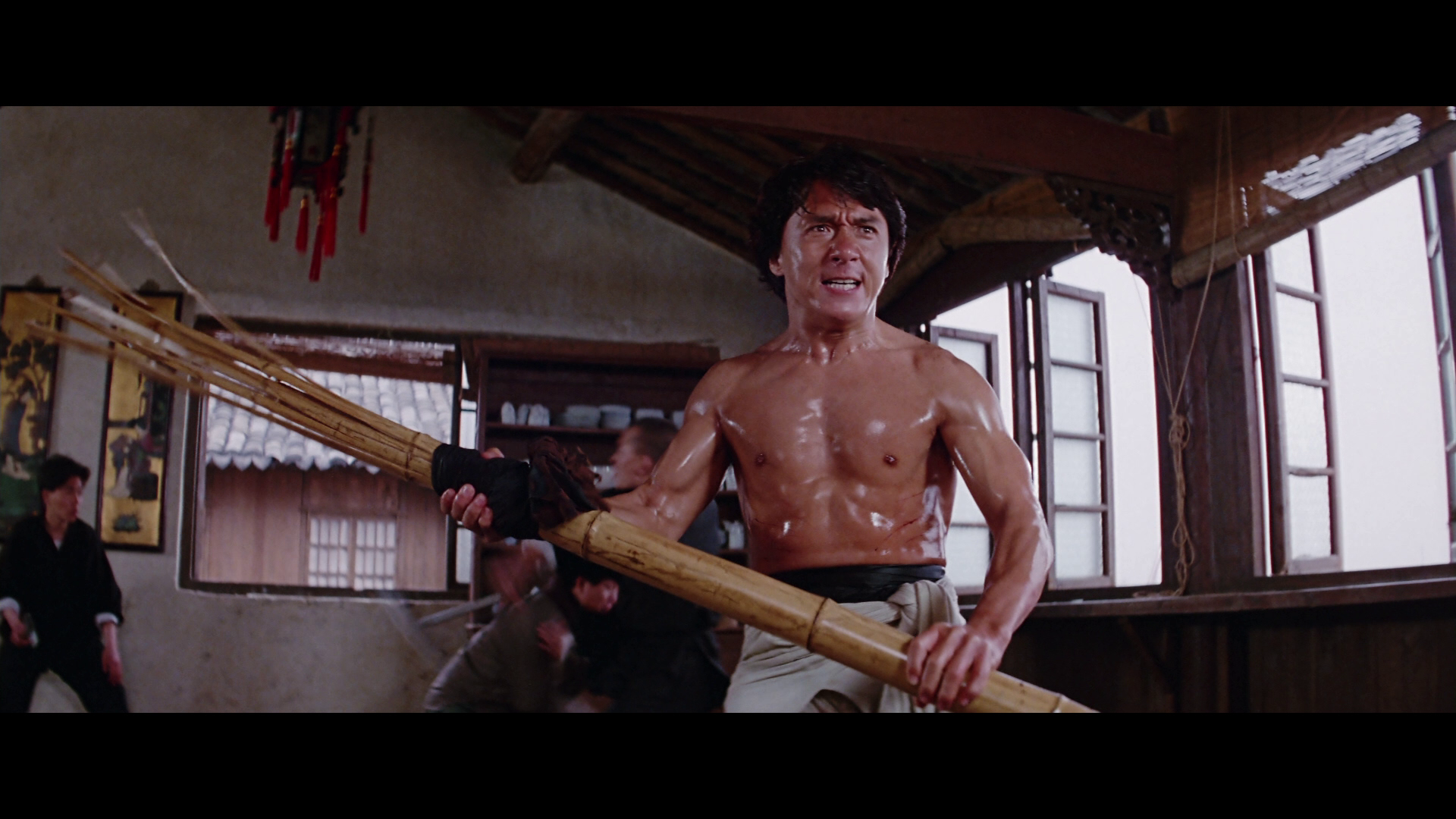 For the first time on US Blu-ray, the original Hong Kong cut reaches these shores, not the slightly tweaked Miramax release. Sadly, it seems Warner only licensed this master, foregoing a restoration. What’s here suffers from heavy digital manipulation, erasing the grain structure. Not only that, artifacting smothers the screen. That’s not the encode most likely, rather the sub-par, slapdash mastering process leaving behind remnants.

Bizarrely, the scene around 51-minutes in (where the ginseng switch is discovered), a number of those shots look superb. That changes edit-to-edit, but when the grain is intact, texture flourishes and resolution boosts appear. It amounts to around a minute total. Following after, inconsistent scenes do the same, but it’s all over the place and random. In brief moments, Drunken Master II excels in HD.

It’s a toss-up a between this and the previous US disc. While middling in resolution, dull color, and heavy on print damage, it at least maintained grain, along with better texture.

Three DTS-HD tracks on offer – Mandarin, Cantonese, and English dub. They all lack crispness, delivering muffled dialog. Sound effects struggle too co-exist with the score. It all blends, various elements fighting for attention.

Nothing, although the inclusion of original Hong Kong English subtitles is a first.

One of Jackie Chan’s many brilliant kung-fu spectacles, Drunken Master II’s tale of British colonialism is a fun one, led by multiple fight scene spectacles.

The 15 unaltered images below represent the Blu-ray. For an additional 26 Drunken Master II screenshots, early access to all screens (plus the 120,000+ already in our library), 120 exclusive 4K UHD reviews, and more, subscribe on Patreon.