The internet accosts Shrek. It’s a gag, a meme, a relic worth joking about from a bygone era where Matrix parodies still made sense. Shrek changed American animation forever, and producers took the worst lessons forward – more pop songs, toilet humor, and loud side characters. Toy Story signaled the death knell of pencils and ink; Shrek turned the whole thing into an infinitely marketable, cross-cultural bonanza.

For its faults and obnoxiousness (it’s possible the latter comes from overexposure), Shrek tells a positive, clever story that’s never overt. Princess Fiona, embarrassed after turning into an ogre, says, “Princesses aren’t supposed to look like this,” the lesson locked in on themes of equality, honesty, and objectiveness. It starts early as Donkey (Eddie Murphy) can’t understand what’s wrong with Shrek (Michael Meyers); maybe he’s a dolt, but Donkey doesn’t see species let alone color.

Shrek is too much, and forced its way into pop culture

Villain Lord Farquaad (John Lithgow) casually enacts his evil. Upon entering the town, a puppet show sings about Farquaad’s town being a, “perfect place,” this after Farquaad kicked out fairy tale characters. Differences are judged harshly, and adding a vicious dictatorial German-esque brutality, there’s a bounty paid for each character the townsfolk hand over.

Shrek opens in Disney tradition. A book, read by Shrek, who slams it shut laughing at the naivety. Much as Shrek conveys a clever, well written social change, it’s also admitting that fairy tale fantasy no longer works. Fioana’s (Cameron Diaz) realization that a prince won’t save her – at least not in the typical sense – turns into a harsh wake-up call. Later, she fends for herself. She only needed rescuing from a castle because she was told as such, and knew no better. It’s a clever method to dispel gender roles, which happen at a sociological level.

Were that all Shrek did, break away from static norms instilled in Disney’s classics, the internet wouldn’t have taken aim. Then Smash Mouth tracks blare, Donkey hums along to Willie Nelson, and Joan Jett fills otherwise dead air during a fight. Shrek is too much, and forced its way into pop culture rather than filtering in through any manner of intelligence. Self-awareness can only carry a movie so far; Shrek leans on it the whole way through and by the end it’s so tiring, so… 2000s, the smart half withers into the background. 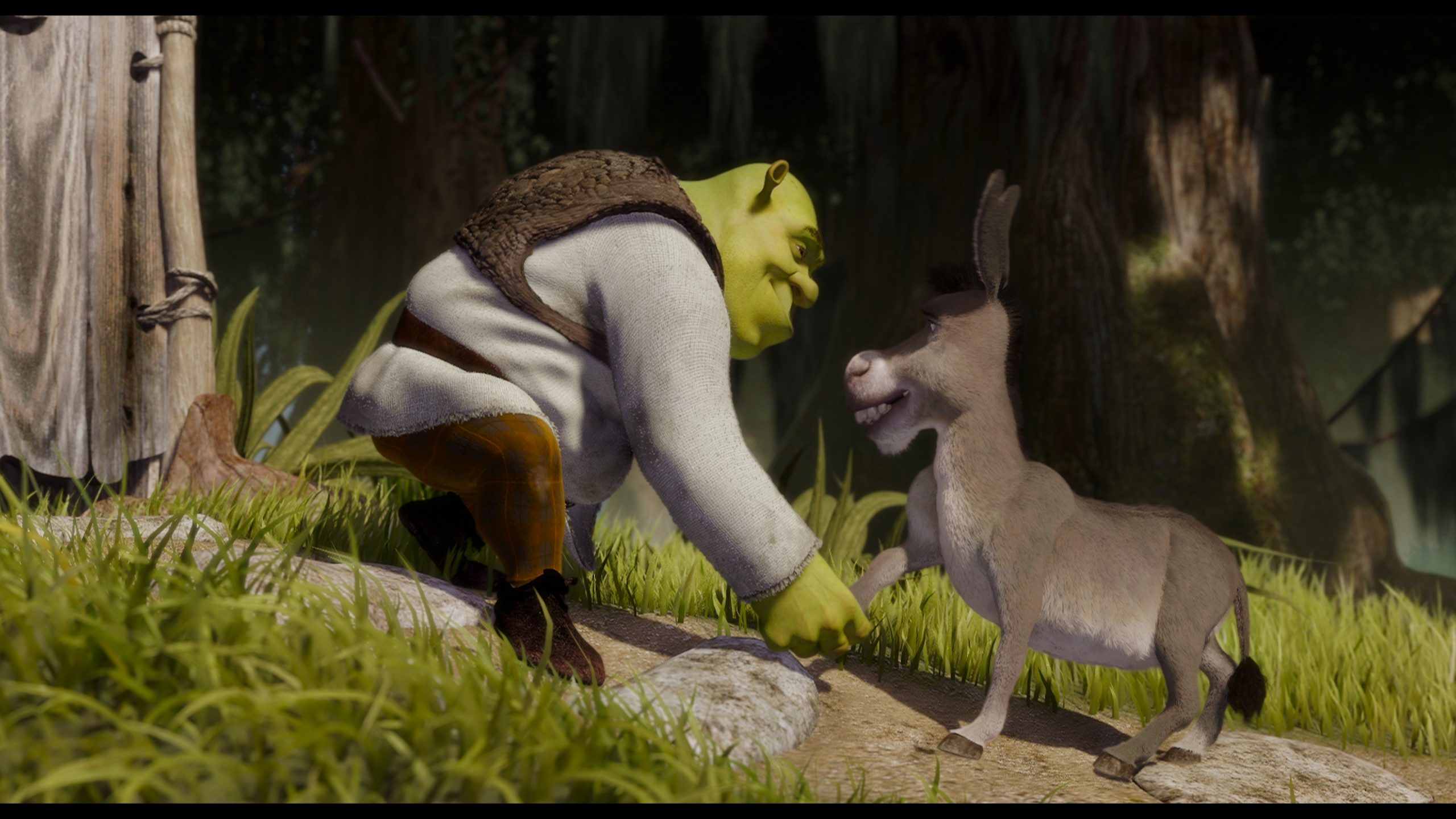 Shrek isn’t a disc to purchase for its detail and resolution gains. In that, the Blu-ray does well enough, The upscale to 4K only introduces additional problems, revealing the dated source material through things like aliasing, flicker, and even texture drop-outs (Shrek’s eyebrows disappear more than a few times). Short of a full re-rendering, this is it for Shrek.

Minor color gains add tiny flair. Shrek green is prominent. Other primaries pop out, like Farquaad’s red outfit. By animated standards, it’s odd seeing how reserved the design is, sticking to its swampy roots for much of the runtime – earth tones and drier hues.

The soundtrack drives this DTS:X track, low-end support boomy and powerful, perfectly accentuating the music selections. Sadly, sound effects lack the same juice. Dragon-born fireballs add little, and the destruction in the castle barely creates a whimper in the subwoofer.

Action scenes play in the added space, like witches on brooms flying overhead or thunder clashing from the sky. All around great directionality misses nothing. Listen as Shrek rocks the bridge around 30-minutes in. Creaking boards and ropes sweep between the surrounds and stereos, both unique in how they stretch to the sides. There’s clear advancement between disc generations.

On the 4K disc itself, Shrek loads up on the DVD (and then Blu-ray) bonuses. A look at Donkey, voice acting, deleted scenes, music videos, and a commentary (including co-directors Andrew Adamson, Vicky Adamson, and producer Aron Warner) fill space. Universal also adds a bonus disc containing a slew of shorts and five episodes from Puss in Boots’ TV series.

Over the years becoming an internet meme, Shrek deserves the derision – if not so much as to ignore the the clever story beats.