Part of the continuing teen sci-fi/dystopia genre, Chaos Walking comfortably squeezes into the mix dominated by Hunger Games. More than in story construction, but heavy, overbearing liberal leaning themes, far further than other movies of its ilk.

Although the source material dates back to 2010, Chaos Walking’s film adaptation updates and strengthens the weighted messages about masculinity, equality, and colonization. Fears over all immigrants and outsiders, stemming from a vile, truth-hiding leader seem all-too prescient to the now. This outweighs and smothers the few characters stuck on this planet, populated entirely by men.

Todd (Tom Holland) spends the movie fighting against what he’s told to be. He’s the nice kid who doesn’t want to kill or fight unless necessary. Too often this stranded society forces him to. Growing up among angry men, he learns to hate – but only because of lies.

In drops (literally) Daisy Ridley, the first woman in the colony, and there Chaos Walking finds a feminist cause. Early, the race is Ridley’s attempted escape from these angry, abusive men. Later, it’s about establishing herself. Todd rushes into a house to save her only to discover she overcame the attacker, leaving them handcuffed on the floor. Todd’s confused face represents a subset of the population still unwilling to admit women can hold their own whether men stick around to save them or not.

This work to define a pertinent worldview lets the story slip away. Notably a troubled production, Chaos Walking tries to find a rhythm. Instead, it lags and chugs between modest action scenes. For being set on an alien world, there’s plenty of visible Earth go around. A fight against a native creature seems included purely to note this take place elsewhere in the galaxy, and to cement the cruel occupation subplot, which doesn’t amount to anything. As if Chaos Walking doesn’t stuff itself with enough material, Todd stares down a truth on who’s actually the foreigner.

Somewhere in Chaos Walking is an idea worth expanding on. It’s clear from the ending sequels were planned to give Lionsgate a franchise. While presenting a firm political base, there’s little left to explore of any interest. Todd’s maturation offers an in, if nothing else. Ridley’s character isn’t deepened enough to support herself let alone a longer arc. 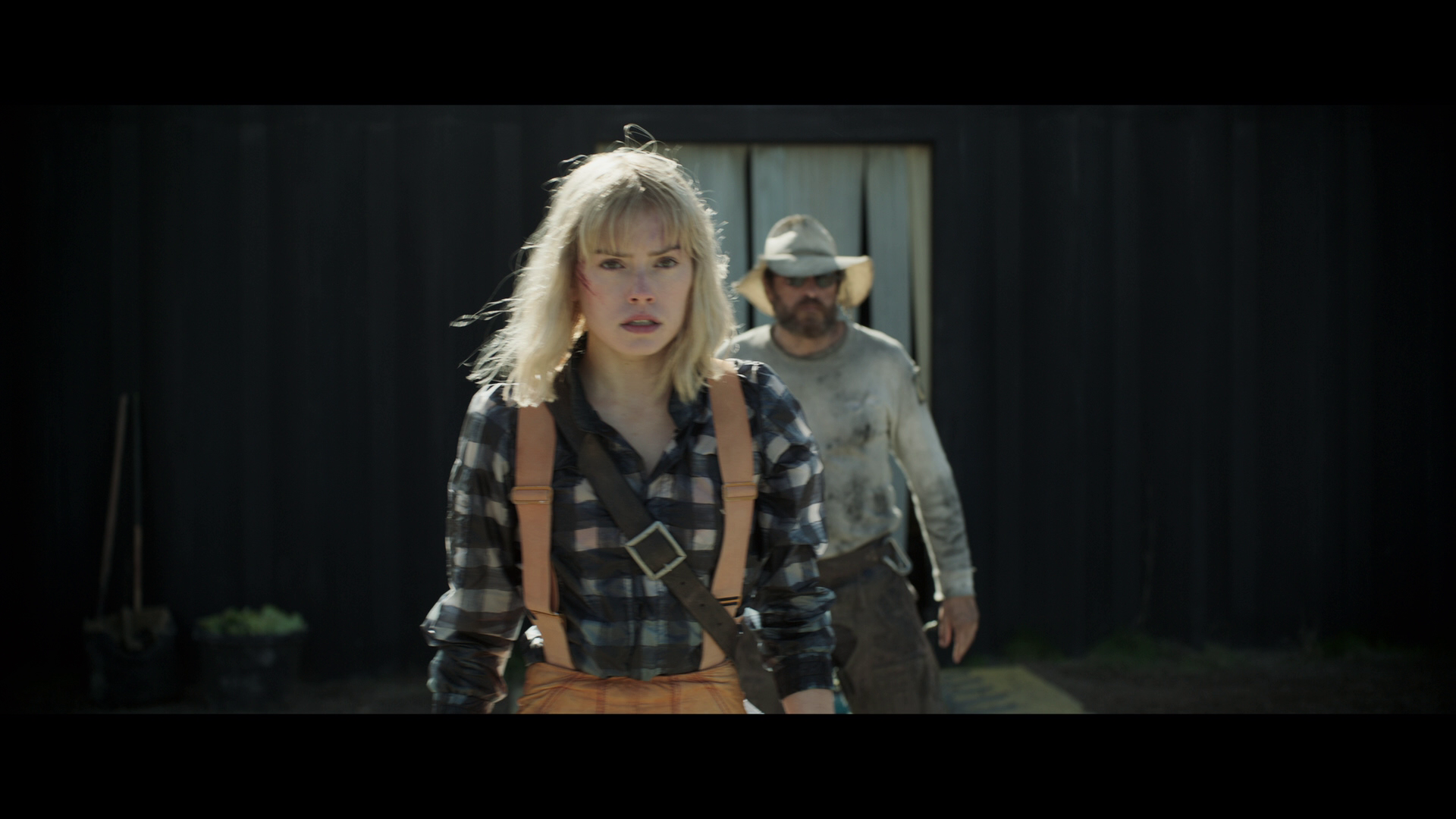 Rather pedestrian video comes from a digital source, clean, without much noise. Clarity allows the available detail to push through, although the definition isn’t much. Softened imagery indicates a rudimentary 2K source, perfectly passable yet unimpressive by current standards.

Being set on an alien planet, drained color favors flat greens and browns. Basically, receded earth tones across the board and tightly controlled primaries. Even the orange coat that’s an early plot point doesn’t pop. That’s by design, and likely makes it easier on Lionsgate’s encode.

A movie about thoughts swirling around people’s heads, voices utilize every available channel and come close to setting a record for height usage in an Atmos mix. Alongside other positionals, overheads run at a constant whenever needed. Action scenes rush between speakers, zipping horses and bullets front to back or side to side. It’s wonderfully bold design.

Awesome dynamic range picks up initially during a re-entry burn, the flames rising, the sound lowering (in Hz). It’s a great rumble. Other low-end accentuation deserves notice too. A sequence on the rapids generates thrust from intensely deep scoring and rushing water (superlative in terms of surround channels too).

Director Doug Liman jumps into the booth for commentary alongside producer Alison Winter and editor Doc Crotzer. Their commentary continues over 45-minutes worth of deleted scenes. An 18-minute featurette is narrated by Liman as set footage plays in the background. He’s quite honest about the production issues. Author Patrick Ness chats about the core idea over nine minutes. Daisy Ridley talks about her character in the next bonus, coming in at seven minutes. Additional cast speak for 10-minutes, then a peak into the the score by composer Brandon Roberts (a bit over four minutes).

Lost in the shuffle of young teen sci-fi dystopian thrillers, Chaos Walking is all thematic politics and not much story.

The 15 unaltered images below represent the Blu-ray. For an additional 58 Chaos Walking screenshots, early access to all screens (plus the 120,000+ already in our library), 120 exclusive 4K UHD reviews, and more, subscribe on Patreon.