Wonder Woman leads a team of Golden Age DC superheroes in Justice Society: World War II, a sprawling adventure that features the current Flash traveling back in time. Dropped in the middle of a battle between the Justice Society and Nazi soldiers, he meets classic Golden Age superheroes such as Black Canary, Hourman, Jay Garrick (Flash), Hawkman, and even Dr. Fate. Steve Trevor also appears in a major role, Wonder Woman’s long-time romantic interest. Flash must help the Justice Society battle the Nazis and return to his own time.

Justice Society: World War II has a little bit of everything in its taut 84 minutes sure to please fans. There’s heavy action, light drama, tragedy and a dash of romance, all with a superhero twist. Stana Katic voices Wonder Woman and Matt Bomer (Doom Patrol) voices Flash, the two lead stars in a mostly fine ensemble cast with many experienced voice actors.

Stana Katic may not have been an ideal choice for Wonder Woman but it’s not a deal breaker this time. Her line readings are often stiff, weighed down by hints of a Eastern European accent that doesn’t really fit the character’s origins.

Barry Allen is hurtled back through time when Superman and the speedster are battling Brainiac in the present. This is a young Flash and Superman that have yet to join up together in the Justice League, which picks up apparently in the same continuity from Superman: Man of Tomorrow, the first movie in DC’s new animated filmverse. It appears DC is slowly building a connected superhero universe with these animated movies, much the same way Marvel has done under Disney.

The action-packed adventure is pulpy fun with a few surprising curveballs thrown in for good measure. Settings include the battlefields of Europe, the underwater kingdom of Atlantis, and a giant monster destroying downtown Metropolis.

Even for someone knowledgeable about the Golden Age characters, the little wrinkles thrown into the plot and character building help drive the story towards a satisfying and epic finale. A couple well-done surprises and heel turns mark Justice Society: World War II as one of DC’s more intelligently constructed movies. Fans may wonder why heroes like Green Lantern and Wildcat are missing, but there are only so many characters you can introduce within 90 minutes.

Fans will eat up all the cute banter and quips between the Golden Age superheroes. There are many small nods to what makes each hero unique, from Hawkman’s various reincarnations to Hourman worrying his powers will expire within minutes. It is smart, effective world building that helps introduce many of these Golden Age characters to new audiences without overwhelming them. The movie sweetly handles the romantic relationship between Wonder Woman and Steve Trevor with care and affection. It’s one of the movie’s most endearing qualities.

Hardcore DC fans may notice a small mistake with the Black Canary. Introduced as Dinah Lance, the Golden Age Black Canary went by Dinah Drake before marrying Gotham City detective Larry Lance. Something Dinah mentions indicates she’s not yet married in the movie.

Justice Society: World War II is a well-written, smooth superhero movie made for fans of DC’s Golden Age characters. The fresh and creative tale revitalizes the era’s superheroes for younger fans. The biggest complaint will almost certainly be its inconsistent animation, which looks only so-so. Battles are neatly animated with fluidity but the character designs are not always on model. 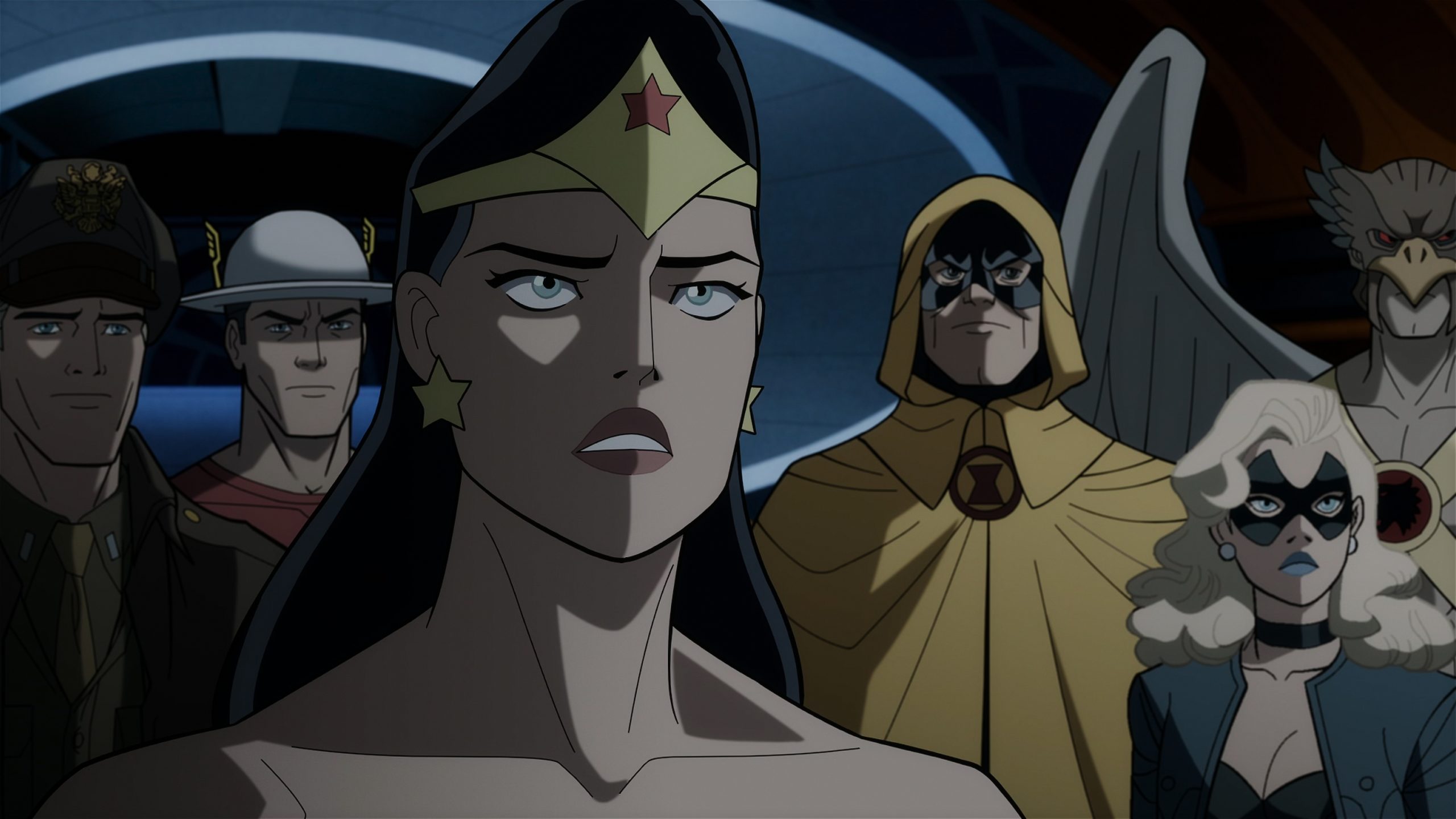 By design, the animation for Justice Society: World War II is meant to evoke the more muted aesthetic often used for war-torn Europe of the period. It’s not a showcase for dazzling HDR with deeper highlights and intense luminosity. A few scenes come to mind that pop with clarity like Dr. Fate’s awakening. That’s not to say the colors are completely dull, but the palette doesn’t really leap off the screen like some other animated UHDs. The bold, flat-shaded animation more or less resembles the effort from Superman: Man of Tomorrow. More attention is paid to backgrounds than in the bland New 52 era.

As discussed in the main section, the animation itself is mildly inconsistent. There are a plethora of splendid and dynamic battle scenes with real cinematic feel and scope in the 1.78:1 presentation. Character designs are hit or miss for the classic characters. It’s nice they attempt to maintain ties with each character’s traditional style. Warner Bros. Animation handed the animation out to a Korean animation shop and the results are uneven. A couple scenes have the characters loosely off model.

The primary difference between the UHD and Blu-ray presentations concerns banding. The 1080P video is replete with banding, possibly both in the source and encoding. Those banding issues are almost completely solved in the far better HEVC encode found on the UHD. The main feature runs 84 minutes on a dual-layer UHD.

The UHD is an upscale in terms of actual resolution. It has been mastered for maximum luminance at 4000 nits and a minimum luminance of .005 nits, rather standard by Warner’s team. There’s no real benefit in terms of texture and detail for the 4K video beyond the modest HDR treatment. But, the banding makes the Blu-ray nearly unwatchable.

The 5.1 DTS-HD MA audio delivers a solid surround mix with vivid imaging and discrete effects. DC’s animated output has fairly predictable sound design and this movie is no exception. The symphonic score is nicely spread across the soundstage with discrete rear activity often saved for battles and action sequences. Dynamics are nice and fat with keenly balanced dialogue. The LFE channel is lightly engaged with occasional bursts of power. Justice Society: World War II’s soundtrack is mildly generic but works well enough for the superhero fare.

Buyers should be aware that Warner continues to include less subtitle and dub choices on their UHD discs, leaving most only for the Blu-ray. My guess this is a subtle form of region-locking by the studio. A Spanish dub is heard in 2.0 Dolby Digital on the UHD, while optional English SDH and French subtitles are offered in a white font.

The UHD comes with a Blu-ray which is essential if you want to watch the special features. Like most UHD releases from a major studio, all bonus content is on the included Blu-ray. The UHD disc itself has no bonus features. The package also includes a Movies Anywhere digital copy that redeems in UHD quality on these sites: MA, Vudu, or FandangoNow.

The regular UHD has an attractive slipcover. Collectors should be aware that Best Buy has an exclusive UHD edition with a small Flash (Barry Allen) figurine.

DC Showcase Short – Kamandi: The Last Boy on Earth! (18:03 in HD; 2.0 Dolby Digital) – Jack Kirby fans, buckle up! One of the legendary comic book artist’s DC characters comes to life in this Kamandi adventure about the last boy on a post-apocalyptic Earth. What got me is how close the animation and character designs evoke Kirby’s distinctive art style. His many fans will wish this short was a full-blown movie.

Adventures in Storytelling: Justice Society: World War II (30:04 in HD) – A panel of five producers and writers break down the movie and discuss various production topics in a group setting. It’s an interesting format for a featurette that works better than a long series of solo interviews. Many fascinating tidbits are revealed, including the creative decisions behind leaving characters like Green Lantern and Dr. Midnite out. Really worth a watch for long-time DC fans.

A Sneak Peek at Batman: The Long Halloween, Part One (10:29 in HD) – An advance look behind the scenes at the next animated DC project, constructed like a featurette with creative talent discussing the original comic book source and sneak previews of character art and clips.

Superman: Man of Tomorrow Trailer (01:41 in HD) – Plays before the main menu.

Cartoons From the D.C. Vault: A two-parter from Bruce Timm’s classic Justice League series that sees the Justice League meet a Golden Age team of superheroes.