An Apple a Day

[Note: This Blu-ray is exclusive to the Disney Movie Club]

More than the film itself, it’s interesting to consider Black Cauldron in conjunction with the cinema trends around it. Not that Black Cauldron doesn’t warrant discussion – it does, certainly – but when placed in the mid-’80s framework, suddenly Disney’s darker animation attempt makes sense.

Fantasy took off in the ‘80s. Dark Crystal brought the genre to a family demographic, while TV’s He-Man featured glowing swords, living skeletons, and Gothic castles. All of this filters through Black Cauldron in some capacity, and with Elmer Bernstein’s score, he’s undeniably bringing his Ghostbusters style back, and the villain’s death is nearly shot-for-shot that of Gremlins’ climax. Add in the farm boy who longs to be a hero (and swings a lighted sword), and suddenly Star Wars is in vogue too.

This isn’t to say Black Cauldron isn’t without risk, so much as the risk was negated by sticking close to popular, mainstream fables. Disney’s closest fear-inducing effort came decades before in Fantasia, notably Mickey’s magical duel against a demon cloaked in shadow. That’s where Black Cauldron aims, never altering centuries old myths, but willing to offset the pure princesses and masculine heroes the studio designed prior.

Protagonist Taran is thin, frail, and often fearful as he ventures into the unknown, picking up strays as he goes. There’s an early feminine fire that signals a change within in the studio too. Princess Eilonwy rejects Taran for believing she isn’t capable of fighting on her own. She does too; Black Cauldron is unusually equal, and while Taran becomes the notable hero, rarely is he in charge. He’s not even the first to sacrifice himself. That credit goes to comic sidekick Gurgi, who almost certainly influenced the voice of Gollum in the Lord of the Rings movie trilogy.

Viewed in the now, Black Cauldron appears tame, but that’s in part because Black Cauldron pushed the medium forward. Do note producers cut and trimmed Black Cauldron to almost nothing before release, and the result is a thin, lightly plotted adventure. But still, given the time period, the dead skeletons rising to battle evokes a definite cultural fear from the time, centered around the far Christian right who denounced Dungeons & Dragons as some form of sorcery. Here’s Disney with a skull-faced villain and inset glowing eyes, calling on the undead from a pot previously held by witches. To think Disney never tried this again is a shame because it’s quite dynamic and in separating from The Rescuers or Fox and the Hounds, successfully distinctive. 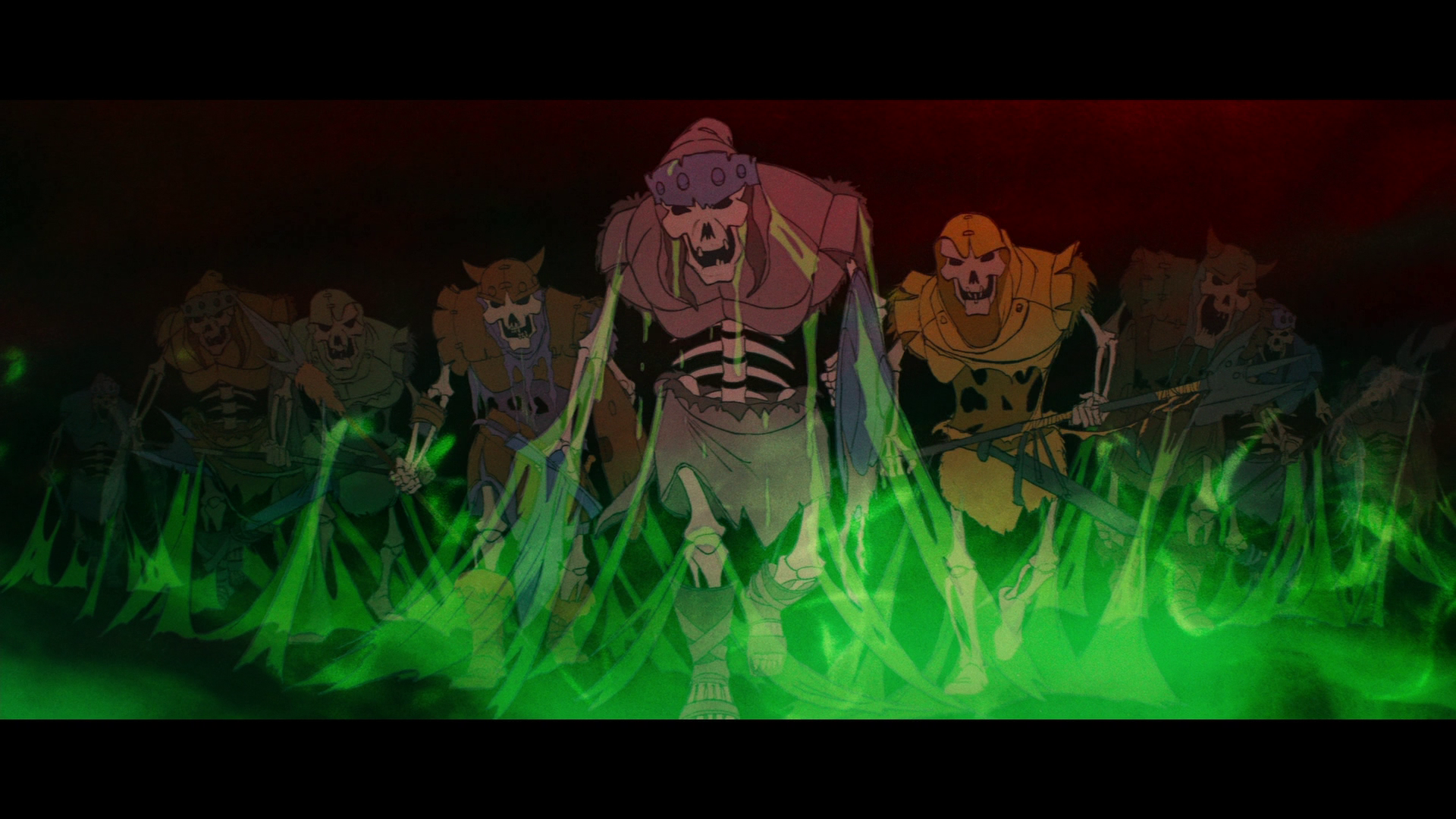 Here’s a rarity: A Disney animation Blu-ray that maintains the original grain structure. Most wipe the image clean, but not Black Cauldron. The fine grain doesn’t create any encoding problems, instead giving the cells/film stock a beautiful organic quality. This likewise preserves paint strokes and ink on the original drawings. Backgrounds look sensational too, down the tiniest artistic stroke.

Rich color grants the images additional pop, giving primaries their due, from the olive greens worn by Taran to a red apple. Saturation doesn’t oversell anything, just embellishes the source to give Black Cauldron more life than DVD releases. The storm-laden skies near the castle explode with eerie reds and pinks, dazzling stuff.

Being one of Disney’s darkest – literally and figuratively – animated efforts, the deepened shadows that swallow the scenery produce a hefty boldness. Lighting strikes add blinding flashes of pure white, and so do candle-lit interiors. The dimensionality is infinitely rich. In terms of making the animation itself better, this release does so thanks to the depth. And, it’s arguably the best looking of Disney’s traditionally animated features on the format.

Including only a 5.1 mix (almost certainly sourced from the 6-track 70mm print), the DTS-HD is a little much in terms of separation. It’s aggressive, splitting dialog in every direction, rears and stereos included. Black Cauldron uses each possible cue, but to an extreme. Transitions don’t happen smoothly, and the effect is too obvious instead of natural. It’s showy, if probably accurate to the tech used to make it.

That said, superlative fidelity gives the score pronounced dynamics without a day of detectable age. Voices run worn, but only in comparison. Marginal LFE finds a few key spots to make itself known, although this isn’t powerful or bold, just an accentuation that’s more akin to something without a true .1.

An odd outlier in Disney’s past, Black Cauldron stands out as an inventive if all too brief animated fantasy in an era with plenty of similar offerings.

The 15 unaltered images below represent the Blu-ray. For an additional 35 Black Cauldron screenshots, early access to all screens (plus the 120,000+ already in our library), 120 exclusive 4K UHD reviews, and more, subscribe on Patreon.