Saturday Morning Fun From the 80s

Thundarr the Barbarian came and went on Saturday mornings but left a huge impression on its young fans in the early Eighties. The Ruby-Spears cartoon took a potpourri of disparate elements from Conan The Barbarian, Star Wars and Planet of the Apes in cooking up one of the more memorable and violent Saturday morning cartoons. Thundarr The Barbarian’s brief success would go on to heavily influence He-Man.

The opening narration sums up the show quite well, laying down its basic sword and sorcery template in a dystopian future dominated by mutants and wicked wizards. Set 2000 years in the future, humans live in the few remnants of civilization left under the boot of malicious and dark forces.

A strange new world rises from the old: a world of savagery, super science, and sorcery. But one man bursts his bonds to fight for justice! With his companions Ookla the Mok and Princess Ariel, he pits his strength, his courage, and his fabulous Sunsword against the forces of evil. He is Thundarr, the Barbarian!

Having dominated the cartoon scene during the Seventies, networks were growing afraid of relying solely on Hanna-Barbera. In comes Ruby-Spears, a company comprised of former Hanna-Barbera employees with a keen understanding of television who had worked on the original Scooby-Doo cartoons. Any child of the Eighties would be familiar with their productions, including the popular Alvin and the Chipmunks cartoon that ran for several years on NBC.

Thundarr the Barbarian aired only two seasons on ABC over 1980-1981. NBC eventually rebroadcast the episodes a couple years later. Ratings were never bad but Thundarr the Barbarian wasn’t tied to any toy lines and its violence stuck out for the time which might have made network executives a little squeamish. Clearly aimed at young boys, the fascinating amalgam of pop culture ideas made Thundarr stick out on Saturday mornings from that era’s mostly kid-oriented fare.

A large part of Thundarr’s success can be attributed to its character designs and settings shaped by animation legend Alex Toth and comic book legend Jack Kirby. Despite the limited animation made famous by Hanna-Barbera, Thundarr the Barbarian has a distinct comic book vibe that was fresh and unique.

Confined to episodes running the standard 20 minutes, Thundarr the Barbarian’s plots are simple and repetitive. Thundarr and his trusted companions Princess Ariel and Ookla the Mok often battle different races of mutant creatures harassing the remaining human population. They run into villains such as the two-faced Gemini, who meet defeat after first capturing the heroes. What’s funny is that Thundarr solves everything with violence, mostly using his magical Sunsword patterned after a lightsaber. Princess Ariel uses her sorcery to help, mostly forming solid beams of light. Ookla the Mok is a friendly hybrid creature heavily inspired by Chewbacca.

Robert Ridgely voices Thundarr. The voice actor played the lead in several different cartoons during this period. His overbearing voice acting is probably the show’s biggest weakness to more mature ears. Which stands in stark contrast to Nellie Bellweather, the wonderfully smooth voice behind Princess Ariel. While Thundarr is a headstrong type that rushes into everything with a kind of blunt stupidity, Ariel is the show’s voice of reason and sobriety. Ariel has to explain almost everything to her dim-witted companions on their travels.

Thundarr the Barbarian is a window back into the past, waking up on a Saturday morning and watching Thundarr’s hammy, futuristic adventures while eating your bowl of cereal. Children of the Eighties are encouraged to check out the childish but well-done cartoon. 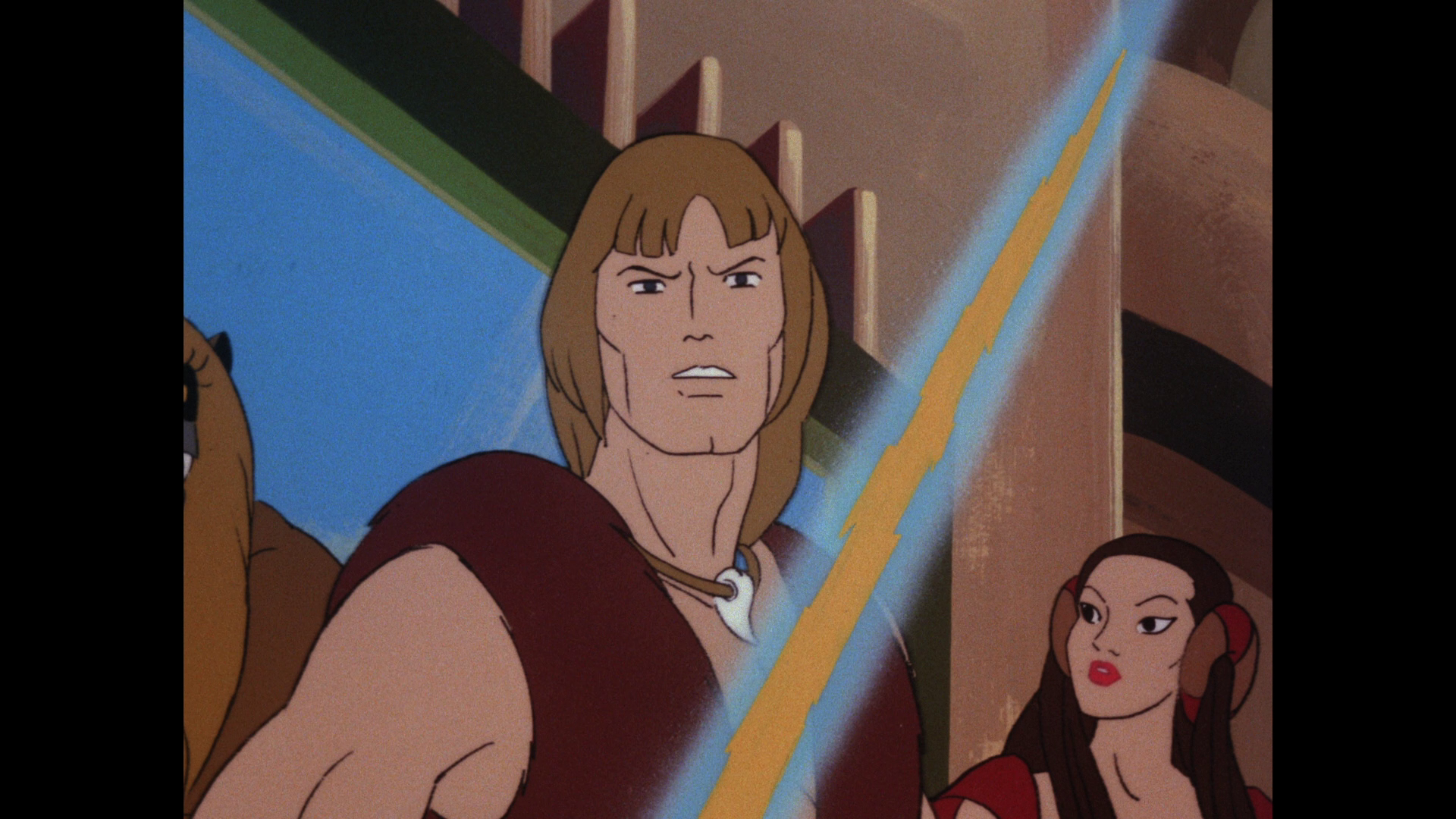 Warner Archive includes all 21 episodes from Thundarr the Barbarian’s two seasons on three BDs – two BD-50s and a BD-25. The 1080P presentation retains the show’s original 1.33:1 broadcast ratio. Boasting new transfers, Thundarr the Barbarian has likely never looked this good before. It’s a vast improvement over the DVD-R set put out over a decade ago with flawless compression fidelity. Animation fans are always sensitive to filtered transfers. The good news is that purists should be happy here.

The cartoon elements are in good condition with excellent black levels and a solid color palette. A few signs of general age and wear appear but they are limited in scope. Various settings across America show up in the inspired dystopian designs, blending earthier colors with choice brighter splashes. Colors are saturated with proper tonality. The contrast really helps the character designs pop, especially some of the more creative villains.

The Ruby-Spears production is firmly animated in the mold of most Hanna-Barbera cartoons with stiff movement and repeated actions. The high-concept ideas are somehow neatly pulled off thanks to simple but effective character designs from legends like Alex Toth and Jack Kirby.

Warner Archive is widely respected in the industry for their care of Warner’s classic animated properties and Thundarr the Barbarian receives their utmost respect. This is a solid presentation of dated, low-budget animation from the Eighties with a nice bump up in actual HD resolution and clarity.

The original mono soundtrack is heard in lossless 2.0 DTS-HD MA audio. Dialogue reproduction is excellent, cleanly recorded in a recording booth by experienced professionals. What sticks out the most are sound effects and the adventurous musical score, both a little boxy and harsh in the upper frequencies. The dynamics are limited as you’d expect from a Saturday morning cartoon. This is serviceable audio that does its job.

The special feature is a neat archival featurette presumably made in the 1990s discussing the show with its creators and experts in the animation field like a UCLA professor.

Lords of Light: The Story of Thundarr the Barbarian (18:33 in SD) – Ken Spears and Joe Ruby discuss how they formed their animation company and how they divvied up duties. The featurette is a well-rounded look back at the company and the cartoon’s genesis, topped off with animation insiders providing insights on its influence.

Conan the Barbarian meets Star Wars in this fun Saturday morning adventure show from Ruby-Spears that caught on with young boys in the 1980s.

The 15 unaltered images below represent the Blu-ray. For an additional 27 Thundarr the Barbarian screenshots, early access to all screens (plus the 120,000+ already in our library), 120 exclusive 4K UHD reviews, and more, subscribe on Patreon.