The Mortuary Collection is a wickedly fun and inspired horror anthology coming from the demented mind of Ryan Spindell. I cannot remember the last time I had so much fun as a horror fan with an anthology film. Far better executed than Creepshow’s recent first season, the great Clancy Brown plays a creepy mortician in the mythical town of Raven’s End. His character provides the movie’s framework for several macabre tales with memorably frightening visuals and sharp writing.

Weaving bits inspired by Tales From The Crypt, The Goonies, early Stephen King, and any number of supernatural cinematic influences, The Mortuary Collection consists of frightening tales laden with delicious irony and slick craftsmanship. Strong special effects and a great soundtrack are the icing on the cake. Few movies can pull off creepy, fun and effectively memorable like The Mortuary Collection.

Montgomery Dark serves as the host of sorts in The Mortuary Collection. It is his tales that mostly fill the anthology. He shares morbid stories that often end with a dramatic and ironic punchline, topped with the necessary gore. There’s a timeless quality to each tale that recalls classic horror films.

The first segment has a party guest discovering something rather unpleasant in the bathroom. The second tale is a terrifying and gross ditty on a womanizing frat boy that gets his just desserts when he sleeps with the wrong girl. The third tale sees a married man at the end of his rope, caring for his comatose wife. The final segment is The Babysitter Murders, a twisted homage to vintage slashers with a big twist.

Clancy Brown is perfectly cast as the old mortician, few command a scene like him in genre filmmaking. Montgomery Dark cuts a spooky impression with audiences. The Mortuary Collection is well-done horror with a few choice laughs, a little irony goes a long way sprinkling in some levity. That’s a credit to the sharp, polished screenplay from director Ryan Spindell.

Built around surprising twists, most of the stories pack a punch with awesome special effects and tried-and-true horror gimmicks. The Mortuary Collection is an anthology in which the scary segments work on their own accord, held together by Montgomery Dark’s slow reveal of darker truths. 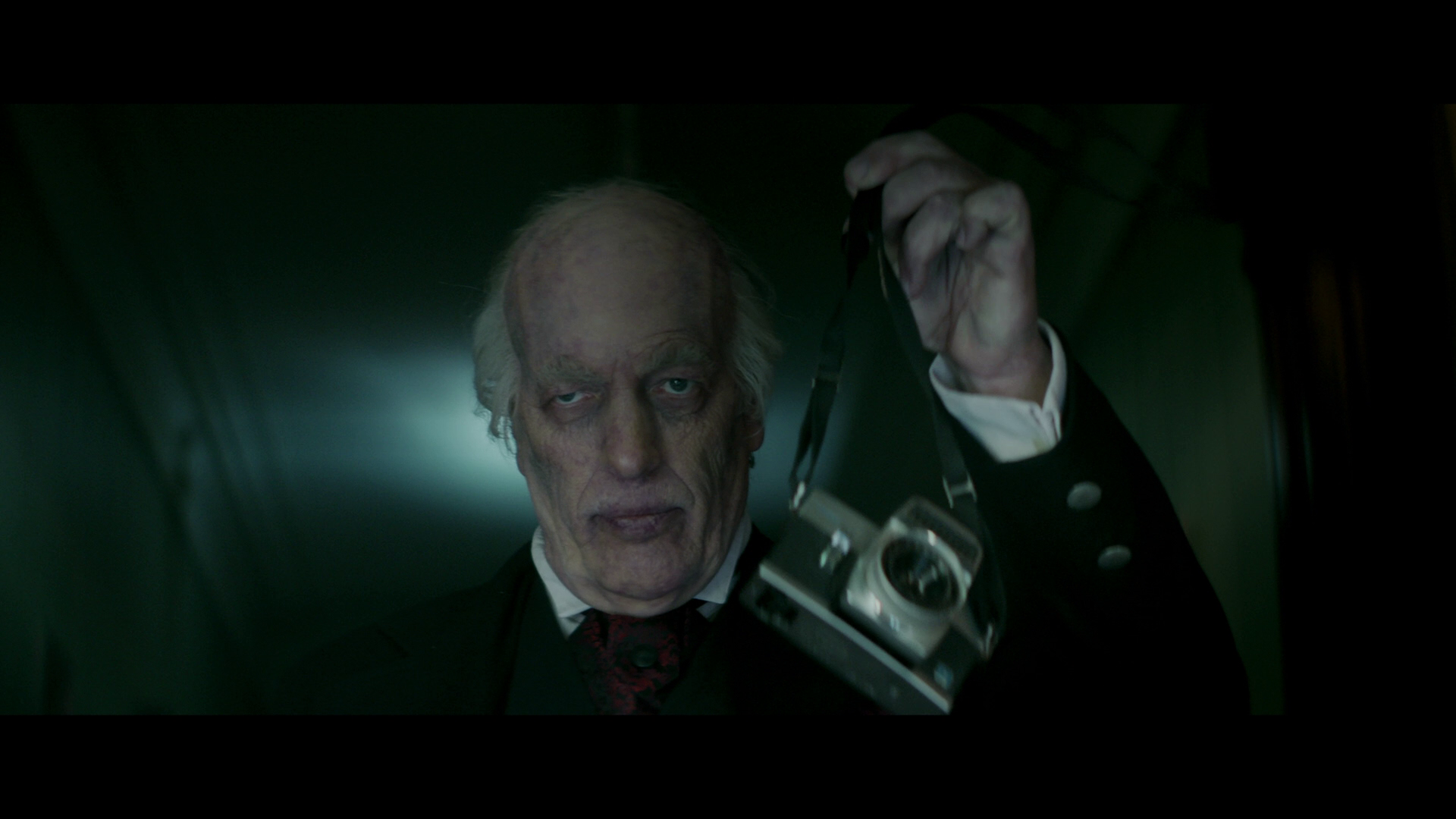 The Mortuary Collection offers lively definition and razor-sharp detail with a gloomy, stylized palette. The unfiltered transfer shows off the movie’s excellent contrast and superb depth. The anthology is far more consistent in picture quality than expected, mostly shot by the same crew across each story.

RLJ Entertainment brings it to Blu-ray without superfluous processing. The 2.39:1 presentation has a glossy finish typical of newer indie productions. A strong AVC encode holds up without introducing compression artifacts. Tasteful shadow delineation and inky black levels set the mood.

It’s a good-looking movie on Blu-ray and may look even better on UHD. While RLJE isn’t currently releasing UHDs, Capelight Pictures in Germany put the movie out on UHD with HDR10+. I can only imagine how the dynamic metadata would bolster the already strong visuals. Videophiles may want to investigate that option if Blu-ray simply isn’t good enough for you.

The 5.1 DTS-HD MA audio is a solid, meat-and-potatoes kind of surround mix that adds to the movie’s more frightening scenes. Some minor atmosphere and rear action creates limited immersion, but largely this is a soundstage pushed forward with clean musical fidelity and intelligible dialogue. Bass is light for horror but otherwise there are no major complaints in the sound department.

The real revelation here is the score and catchy tunes provided by the talented Mondo Boys. The music absolutely helps set the tone and greatly elevates the movie’s entertainment value.

Optional English SDH, French and Spanish subtitles play in a white font. The subtitles remain inside the 2.39:1 widescreen presentation at all times.

The Mortuary Collection arrives on Blu-ray courtesy of RLJE Films and SHUDDER with a nicely embossed slipcover. The special features are voluminous with in-depth interviews involving cast and crew, not to mention extensive behind-the-scenes footage. Every aspect of the production is covered, from music to make-up, in some detail.

This disc is locked to Region A; a nearly identical disc with similar special features has been put out in Germany by Capelight Pictures in a Region B release.

Director’s Audio Commentary – Writer/Director Ryan Spindell gives a focused, engaging solo discussion of his movie that covers a lot of ground. Everything from his influences to how he pulled off certain shots are mentioned. Worth a listen for aspiring indie filmmakers.

Behind The Scenes Featurettes (14 In Total):

Amalgamated Dynamics, Inc. (13:51 in HD) – The VFX shop behind the movie’s effects is shown.

Behind The Scenes Photo Gallery (HD) – 21 still photos taken from the production.

The 15 unaltered images below represent the Blu-ray. For an additional 44 Mortuary Collection screenshots, early access to all screens (plus the 120,000+ already in our library), 120 exclusive 4K UHD reviews, and more, subscribe on Patreon.