“This is a bad movie. It’s too long, dull, there’s hardly any Wonder Woman until midway through, and the obnoxious cartoon camp happens in excess. Tone isn’t something Wonder Woman 1984 settles on. Pascal’s caricature of TV showmen is insufferable in the first act, and Kristen Wiig’s dorky museum worker seems pulled from a lazy rom com. Those colorful glimmers of ‘80s culture feel less historical than stuffed to nostalgic extremes. It’s remarkable how inviting this looks before a wishing stone/monkey’s paw rips it away, as if the only problems facing society were mowhawk-sporting teenagers riding the subway.”

During its run on HBO Max, Wonder Woman 1984 didn’t impress visually. No surprise given the choked bitrate there, yet those same issues carry over to Warner’s UHD release too. Meant to carry the ’80s look, the grain filter – or rather its unnatural noisiness – intrudes constantly. It’s a mess, as if falling back on old habits Warner used early in Blu-ray’s life. Chroma artifacts appear more than detail, causing small pockets of discoloration. It’s especially apparent on faces in the mid-range.

Color saturation creates a likely culprit, the dynamic, vibrant palette a challenge for any compression algorithm. That’s not an excuse; other discs sport sensational vividness without problems. For whatever reason, Wonder Woman 1984 can’t handle this source. Minus the encoding sloppiness, this is quite attractive, almost glowing. Or, akin to being played back on an uncalibrated display.

Grading factors into the Dolby Vision side too. With a warm wash over many scenes, flesh tones steer toward orange, and things like clouds avoid pure white. Brightness still works hard, giving the lasso an intensity as it whips about. A fireworks show is beyond reference grade brilliance. Black levels choose a faded aesthetic, often blue and lacking in weight. Image density simply isn’t here (and allows more noise into the frame). Sharpness and resolution help, but can’t overcome the other issues. For every impressive lighting scheme that draws out fidelity, another is lost to the disc’s messiness or purposefully worn dimensionality. 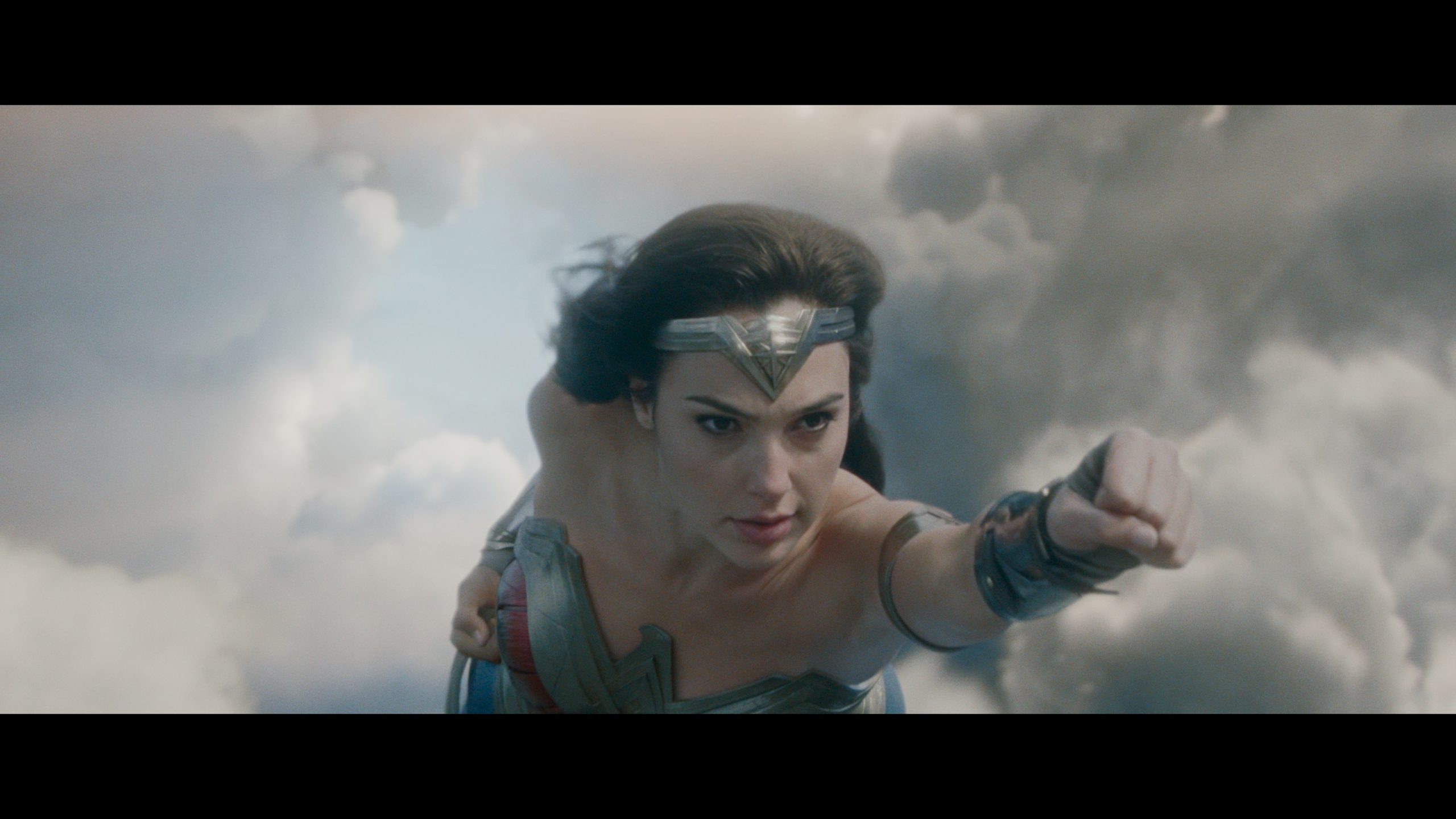 Given how most of the action is contained to the final act, the Atmos takes time to build. The mall attack features a whipping lasso between every speaker – heights too. Small ambiance at parties will move around, and music fills the soundstage fluidly. Things pick up as Chris Pine first fires up a jet, the engines blasting into the lows, and then jumping through the positionals.

When the desert car chase hits, that’s when the mix finally throws its weight around, even if it’s still quiet (expect to bump the volume a few notches). Heavy turret fire slams the low-end. Collisions do the same. Bullets go astray, shredding the rears and heights as they pass. Mixing does give the score some precedence, but not to any great cost to the dynamics as a whole. The Cheetah fight is a fun one, electricity crackling and towers falling, even if the bass sounds pinched.

The Blu-ray holds everything in this department. At 36-minutes, the core making-of has some great production value, even if it slips into routine EPK interviews. A dorky bit on Gadot and Wiig’s characters features needless plot recap with minor set footage. At 10-minutes, the intro scene is explored in its own featurette. A few scene breakdowns, set footage, a look at the Amazonian actors, in-movie infomercial, a great gag reel, and killer mash-up of the movie and TV series finish a routine bonus set off.