John Goodman stars as legendary Yankee slugger Babe Ruth in this competent ’90s biopic. The Babe mostly chronicles the Bambino’s playing career and rambunctious personal life with warm regard and candor. Ruth’s legacy as the greatest baseball player is honored with respect. The script fairly captures Ruth’s out-sized lifestyle and personality despite a few dramatic liberties.

The Babe probably isn’t good enough drama on its own for non-baseball fans but anyone interested in the life of baseball’s most revered player should find it compelling. Kelly McGillis and Bruce Boxleitner co-star alongside John Goodman.

There’s little doubt that director Arthur Hiller borrows heavily from The Natural in spirit and tone, which seems to have partially inspired the template used for The Babe. The Natural derived much of its mythic power from Ruth’s own career, and it’s hard not seeing this movie as a poor man’s version of Redford’s iconic baseball memento. The Babe is art imitating better art imitating life, which works out better than it sounds.

John Goodman has much to do with the movie’s success. He’s perfectly cast in the role, especially when Ruth becomes an aging, bloated player on his last legs. Goodman somewhat physically resembles the Sultan of Swat and is uncanny with his presence. About the only shortcoming is Goodman’s unathletic swing, which never looks all that realistic to trained baseball eyes. Thankfully, Hiller must have agreed because the edits don’t dwell on showcasing Ruth’s batting stance.

The story loosely follows actual chronological events in Ruth’s life, beginning with his hard-scrabble life as an abandoned child in Baltimore. First playing as a pitcher for the Boston Red Sox, it is soon discovered he can hit homeruns like no one else. The rest is baseball history as they say.

Baseball is always a constant in The Babe but much of the drama swirls around the women in his life. His first wife Helen and then Claire as his career winds down provide the more humane character beats. The stress of Ruth’s hard living and womanizing creates massive problems for Helen.

A few liberties are taken with reality for dramatic purposes. The movie makes it seem like Ruth had a three-homer game at the end of his career and then immediately walked off the field into retirement. The Yankee great did have a three homer game near the very end, but Ruth only retired after a miserable stretch of several weeks when he went into a terrible slump. 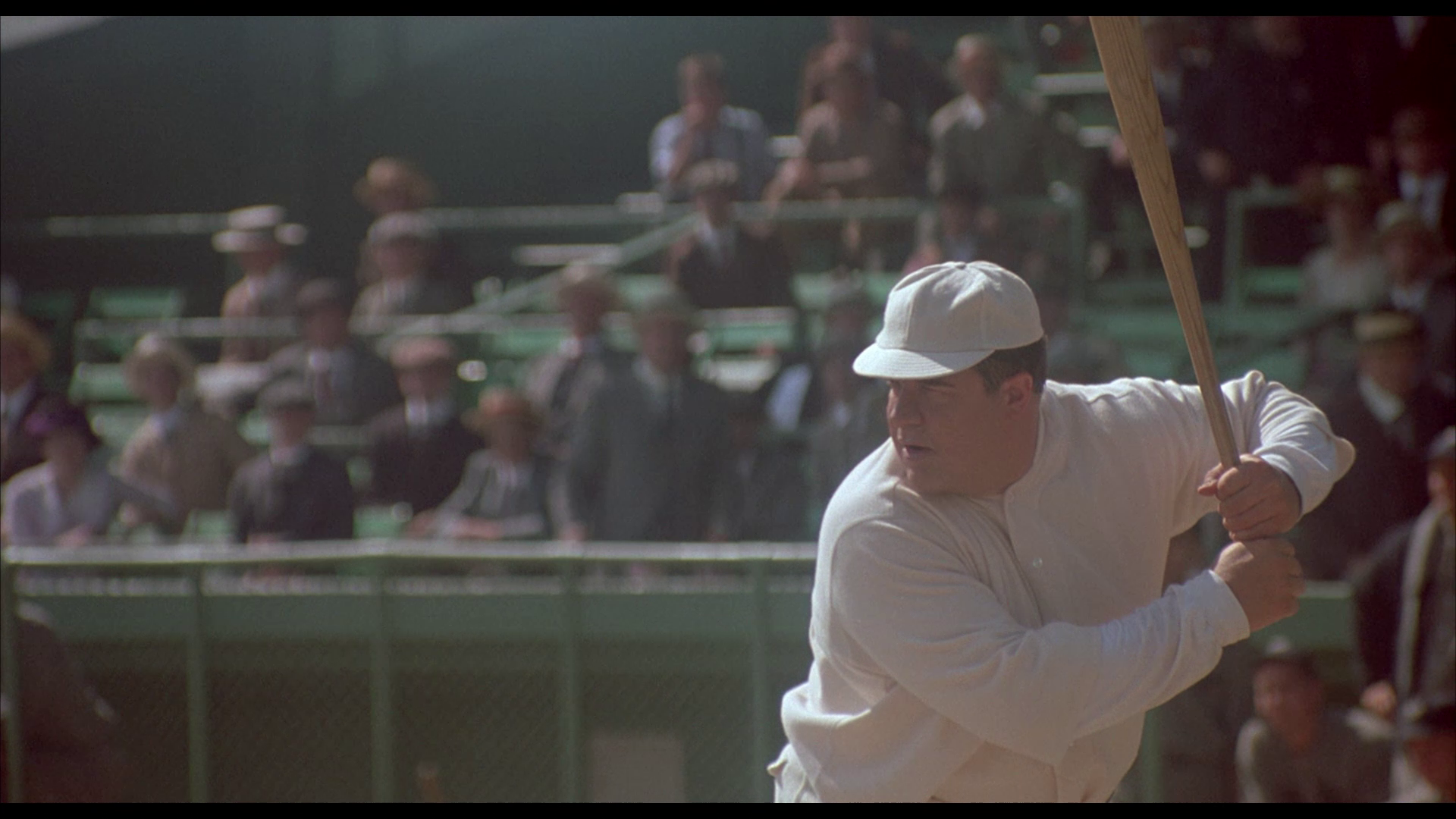 Mill Creek licensed The Babe from Universal and reuses the same dated transfer the studio put out just four years ago. The 1.85:1 presentation is adequate at best. It’s a dated film scan with decent definition.

The major issue is a complete lack of care regarding the color grading. The Babe’s overall tonality and definition is maddeningly inconsistent. There’s obvious telecine wobble in spots, uneven colors, and muddy soft-focus on occasion. The colors are somewhat washed out and its contrast wavers from average to excellent without reason.

The main feature runs 114 minutes on a BD-25. The AVC encode handles the grain structure with a few minor artifacts but largely meets transparency requirements. The one nice thing about the film transfer is that it hasn’t been filtered and little processing has been applied. If Universal cared enough to give the movie a new, proper color timing, the basic image harvest is good enough for 1080P video.

Surprisingly enough, The Babe has never received a surround remix for home video. The perfunctory 2.0 DTS-HD MA audio has excellent dialogue reproduction and a modest soundstage with minor atmosphere.

Composer Elmer Bernstein’s score seems to take heavy inspiration from Randy Newman’s memorable score for The Natural. There isn’t much room for colorful sound in Ruth’s life besides a few sharp-sounding baseball effects, so the audio design is fine but forgettable. It’s serviceable audio but not particularly noteworthy.

Mill Creek releases The Babe as a barebones disc in their popular “Retro VHS” slipcover line. What’s interesting is that Universal released the movie on Blu-ray back in 2017 as a Best Buy exclusive with almost forty minutes of featurettes.

There are no substantial A/V differences between the two releases since the same film transfer is used for both BDs, so hardcore fans may want to track down the out-of-print Universal Blu-ray for its bonus features.

An enjoyable biopic of the baseball legend mostly thanks to John Goodman’s natural portrayal.

The 15 unaltered images below represent the Blu-ray. For an additional 44 The Babe screenshots, early access to all screens (plus the 120,000+ already in our library), 120 exclusive 4K UHD reviews, and more, subscribe on Patreon.