The movie combines its over-the-top effects with a domineering, bossy 10-year-old girl that gains control over a completely evil alien threat. She’s the proverbial little sister from hell, drunk on her new power. Psycho Goreman is absolutely bonkers; you either accept the outlandish vibe and embrace it or quickly sour on the experience. Something along the lines of a movie from Troma with a far nastier tone.

PG: Psycho Goreman is a cheesy throwback to monster flicks from the 80s and 90s

Mimi and Luke are young siblings that unearth an alien gemstone in their backyard. They accidentally unleash an evil alien overlord they dub Psycho Goreman. The gem grants them total control over the hulking menace, who is constantly threatening Earth’s death and destruction. The alien overlord ends up becoming their plaything, introducing PG around the neighborhood like you would a new pet. Soon his enemies from the planet Gigax come looking to destroy him. Think Stranger Things meets E.T. with action pinched from the original Teenage Mutant Ninja Turtles.

PG: Psycho Goreman is wacky fun if you grok its devil-may-care attitude. There are no redeeming morals for the young protagonists. If anything, the young Mimi may be the most psychotic and terrifying creature in a flick filled with a remorseless killing monster and utterly amoral aliens. The siblings’ parents are mostly bystanders to her madness, glibly tolerating Mimi’s new creature in a tongue-in-cheek musical montage.

The effects are surprisingly solid for an independent monster movie. Psycho Goreman’s costume holds up under the intense clarity afforded by today’s technology. The other aliens don’t look quite as good on screen but largely get the job done.

The entire b-movie may make for polarizing reactions – it mostly works as a send-up of the genres that inspired Psycho Goreman. This is not entertainment for the whole family. PG: Psycho Goreman is a cheesy throwback to monster flicks from the 80s and 90s, laden with laughs and seriously demented gore. 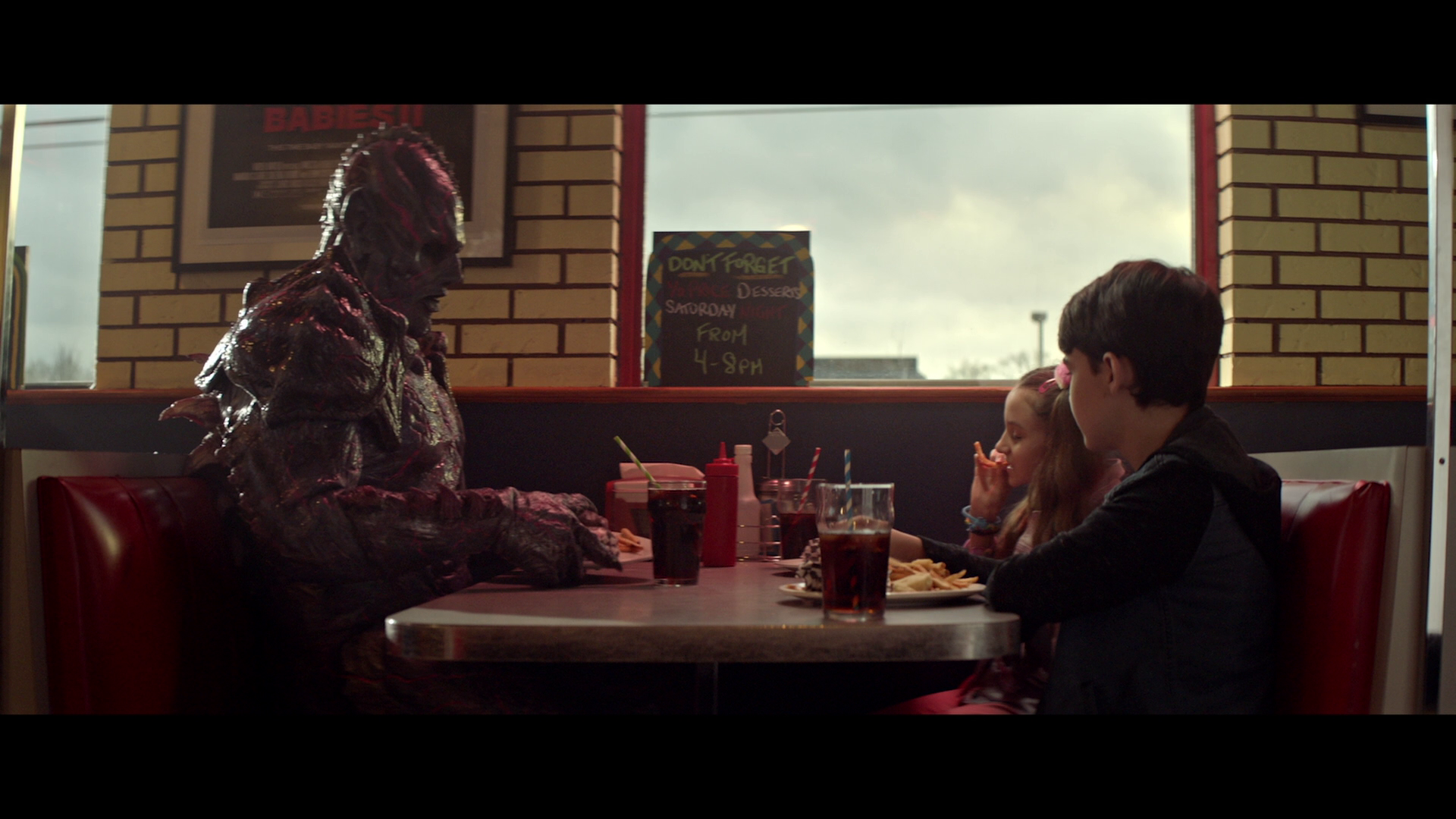 Psycho Goreman’s 2.39:1 presentation offers adequate definition and fine detail. Nothing goes wrong in the transfer from RLJ, likely operating from a 2K Digital Intermediate. The 1080P video receives a quality AVC encode with few artifacts. Shadow delineation is a little dodgy in darker scenes. The rugged digital clarity nicely captures the practical effects in all their glory. Exteriors may be a little washed out with less vivid color.

It is a mostly pristine video experience well-suited for Blu-ray. The picture quality fares better than pedestrian efforts but doesn’t call out for more revealing 4K resolution.

The 5.1 DTS-HD MA audio is generally solid with a mix that emphasizes atmosphere and clarity, occasionally at the expense of softer dialogue. The discrete channel separation may be a little overcooked, though the front soundstage has a sizable presence.

Dynamics are loud and heavy with added weight. The recording lacks the refinement of a proper Hollywood production with a few dialogue issues.

Optional English SDH and Spanish subtitles play in a white font, inside the scope presentation.

RLJ provides a slipcover on first pressings of the Blu-ray. The disc is coded for Region A. Reversible cover artwork lets you pick between drawn art and a static publicity photo of PG. Besides being loaded with special features that delve into the make-up, costumes and music, there’s an elaborate gag insert included that lists “official” merchandise and games for Psycho Goreman. It’s so authentic that at first I didn’t realize it was one, big joke.

Director Commentary – Steven Kostanki gives a lucid, mostly insightful discussion of everything that went into making his wacky monster movie.

One-on-One: An Interview with the Director of PG: PSYCHO GOREMAN (14:40 in HD) – A more focused interview covering his casting choices and also explaining his reasoning behind several key decisions.

Interviews with the Cast (06:24 in HD) – Short interview sessions with the main cast, including the child actors.

Interview with Adam Brooks (04:20 in HD) – A sockpuppet performs the interview with the actor that plays the father.

Kortex: A Konversation (05:58 in HD) – An in-character interview with one of the alien creatures.

Filming the Paladin Fight (07:14 in HD) – Staging for the climactic battle is gone over in some detail.

Behind the Scenes Photo Gallery

A fun, if demented and severely gory, throwback movie that parodies the genre from which it sprung.

The 15 unaltered images below represent the Blu-ray. For an additional 36 Psycho Goreman screenshots, early access to all screens (plus the 120,000+ already in our library), 120 exclusive 4K UHD reviews, and more, subscribe on Patreon.