In bringing Godzilla to American audiences from American filmmakers – again – it’s not unexpected for the focus to narrow on US soldiers. Ford Brody (Aaron-Taylor Johnson) is little aside from a hollow placeholder, representing military values and strength. As an almost insulting nod, it’s Brody who saves an Asian child aboard a Hawaiian elevated train, as if Godzilla suggests that years after Hiroshima/Nagasaki, the blasts turned the States into infallible heroes. After the bomb, the great white American savior is here, wildly out of sync with the Japanese’s specialty of world unification storytelling.

That’s Godzilla’s misstep, casually approaching a monster representing a foreign nation’s terror. In trying to invoke the nuclear subtext, Serizawa (Ken Watanabe) hands an American general a watch, stopped at 8:15 AM, August 6th, 1945. It’s meant to be a somber warning against the military’s plot to utilize nukes. Soon, that’s erased, and Godzilla becomes a chase to save a bomb rather than run from it. Treating the eventual detonation like a short-lived firecracker is absurd too.

Those faults aside, Godzilla is an unusual, patient studio blockbuster. It’s a mistake to assume the Jaws method can work (Godzilla doesn’t have the anchoring human characters), but then the pay-off is demonstrably pure. Rather than splashing digital effects across the screen, Godzilla relies on pure awe, even grace. Seconds short of an hour, the title creature makes landfall, but only after initiating a tidal wave and cautious perspective shots to brilliantly show scale.

Considering American giant monster cinema, from the post-war nuclear fears to now, only Jurassic Park appreciated the wonder of seeing such an event with proper reverence. Fear and panic, certainly, but also moments to pause and admire what changes such beings will leave on the world. Destruction is less spectacle than tragically impacting, the result of hubris, brought to ground level where human characters can only dodge debris.

Now with the ability to take this in as a whole with Warner’s “Monsterverse” series, Godzilla does make the mistake of eliminating central characters who could, possibly, ground the series (King of the Monsters was worse still). A trip to Kong: Skull Island played to Vietnam cinema and nostalgia, unique, yet colorful. Godzilla sets in place a grounded  super-reality where the kaiju intersect the world with gravitas, not superfluous destructive splendor. The tone, the look – none of the other films to date captured the enormity in this way. In that, Godzilla is antagonistic – even admonishing – toward a viewership groomed on endless all-CG spectacle.

To truly pull that off, Godzilla needed richer people, less patriotic bluster. But Godzilla’s so close. 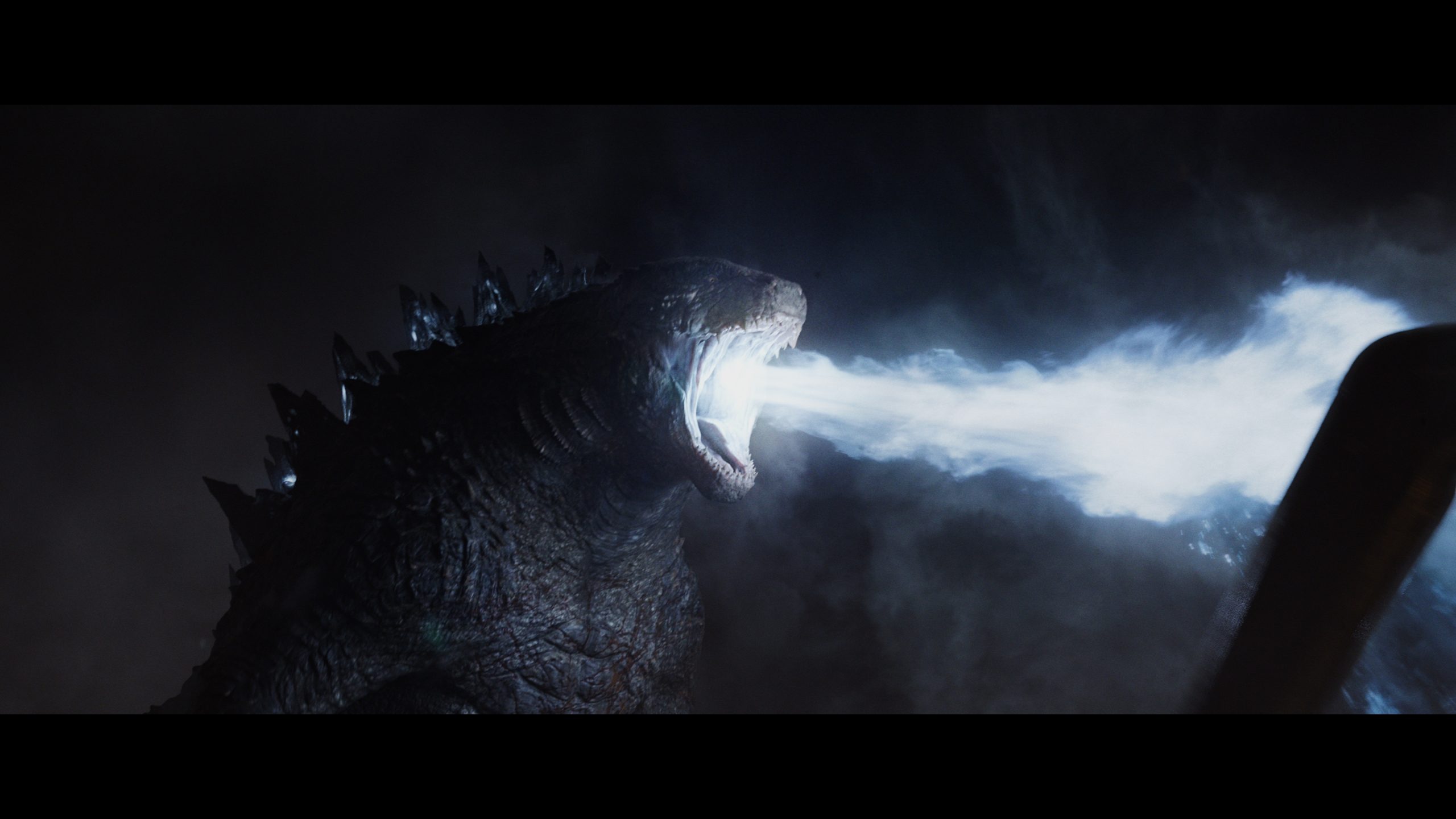 Before getting to what everyone is going to ask and beginning with the upscale of the 2K digital source, that part of the disc is average. Maybe even less than that, considering the occasional light ringing. The disc handles small noise bursts well, and the fidelity pops out enough to notice. Facial texture does make itself known, maintaining a firm presence. City exteriors show decent sharpness, unspectacular when compared to true 4K sources, but a mild leap from the Blu-ray.

Choosing to keep the palette dulled, deep color can only reproduce the restrictive color grading. Warmed over flesh tones take up much of the early runtime, receding to cooler hues elsewhere where/when the cinematography chooses. Godzilla isn’t one for thick, attractive primaries, which this disc reflects.

Now for the major stuff. Godzilla’s Blu-ray garnered significant criticism for its brightness; that disc required a high-end display to work as intended. With this HDR pass, it’s still a notably dark (extra dark, and likely still demanding a great TV too), grayed over movie but, there’s a difference.

Thanks to the added highlights and greater attention to/capability in the shadows, Godzilla sports expanded dimensionality. This new contrast sports superb intensity, making Godzilla’s atomic breath blindingly bright, emphasizing light, and allowing the grim tone to breathe. No matter the other nominal improvements, the HDR makes the upgrade valuable on its own, even when scenes like the train attack carry their near pitch blackness with pride. In a bright room, those scenes will still be difficult to see.

Now in the era of Atmos, this audio spectacle only grows in its power. Incredibly deep, potent low-end support greets every action scene, whether the opening earthquakes collapsing the power plant, the Muto hatching, military strikes, or the eventual city brawl. Footsteps and explosions swell through the room, nailing those deepest tones impeccably. There’s zero fear in making the room rattle, or using the deepest tones. Godzilla is not subtle.

Expanding on the already grandiose 7.1 mix, overheads find numerous reasons to bring fuller dimension to destruction scenes. It’s pinpoint accurate, as if designed for Atmos originally. Balance flawlessly blends the outstanding score, falling rubble, monster roars, or anything else, in total synchronicity. The splendor in Godzilla’s design, from the small touches inside the collapsed cave to the vividness of monster roars jumping between speakers, earns this a place right alongside the equally masterful King of the Monsters disc.

Same bonuses as before, sadly. Nothing new. Godzilla Uncovered is the lengthiest item here at close to 20-minutes. While mostly selling the film with an overlay of praise, the material is rich enough to satisfy. A Whole New Level of Destruction (8:24) focuses on production design, namely with those scenes of scattered debris.

Into the Void’s five minutes are concise with a pre-vis look, and Ancient Enemy tells the story of MUTOs from their earliest conception. Finally, there is a three-part segment labeled Monarch Uncovered, which exists as conspiracy fodder about the film’s events. It’s viral material long after such content has seen its usefulness.

Godzilla doesn’t rush into city-smashing spectacle, bravely going against expectations, and aside from missteps, it’s a special blockbuster.