Forgive yourself if the events of Beyond Skyline escaped your memory. Chances are the movie as a whole disappeared from consciousness until that sentence. It’s likely the third Skyline will follow suit.

This trilogy-maker presents an Earth now affected by human/alien hybrids, living among the people, but spreading a killer virus. Set in Britain, storytelling delves into political hotbeds like immigration, Brexit, and equality, then eventually, British colonialism in the third act. Skylines is a peace-through-war tale, humans headed to the alien planet to stop further invasions. As expected, it’s messy.

Skylines trounces its own credibility

Laser beams, gunplay, ship-to-ship warfare, martial arts brawling; Skylines involves a little of everything to keep the energy high. Credit to the practical visual effects too, capable and impressive. But Skylines is meandering and dorky. In pairing humans and aliens, subtitles translate hybrid dialog into sarcastic military speak, every line meant as humorous, blockbuster quips. Tiring is a kind descriptor.

Skylines’ message concerns acceptance and understanding, poignant, yet in a movie more focused on the endless fighting. While it’s unlikely to ever happen, Skylines is what Independence Day: Resurgence set up for its finale, but given that series’ sweeping patriotic bluster, Skylines shows some nuance. It’s not as simple or direct, and the villains go beyond the monsters, focus turned toward British leadership.

It’s remarkable how Skylines trounces its own credibility. The predictable twists aid the morals; that’s not the issue. Instead, the mingling genetics between the species means following a b-tier Marvel saga by mimicking arm cannon beams and superpowers. Even with expansive digital effects, the scale feels entirely artificial. Of course, with two Asian actors in the cast, they both turn to martial arts, because of course they do.

Rhona Mitra, the notable name in this cast, plays a bit part as a doctor. Skylines is primarily given over to Lindsey Morgan who’s capable in an action setting. Sadly though, the action lets her down, not the other way around. While Morgan returns from Beyond Skyline, her character lacks the development or interest to push this series into anything other than direct-to-video shelf filler. 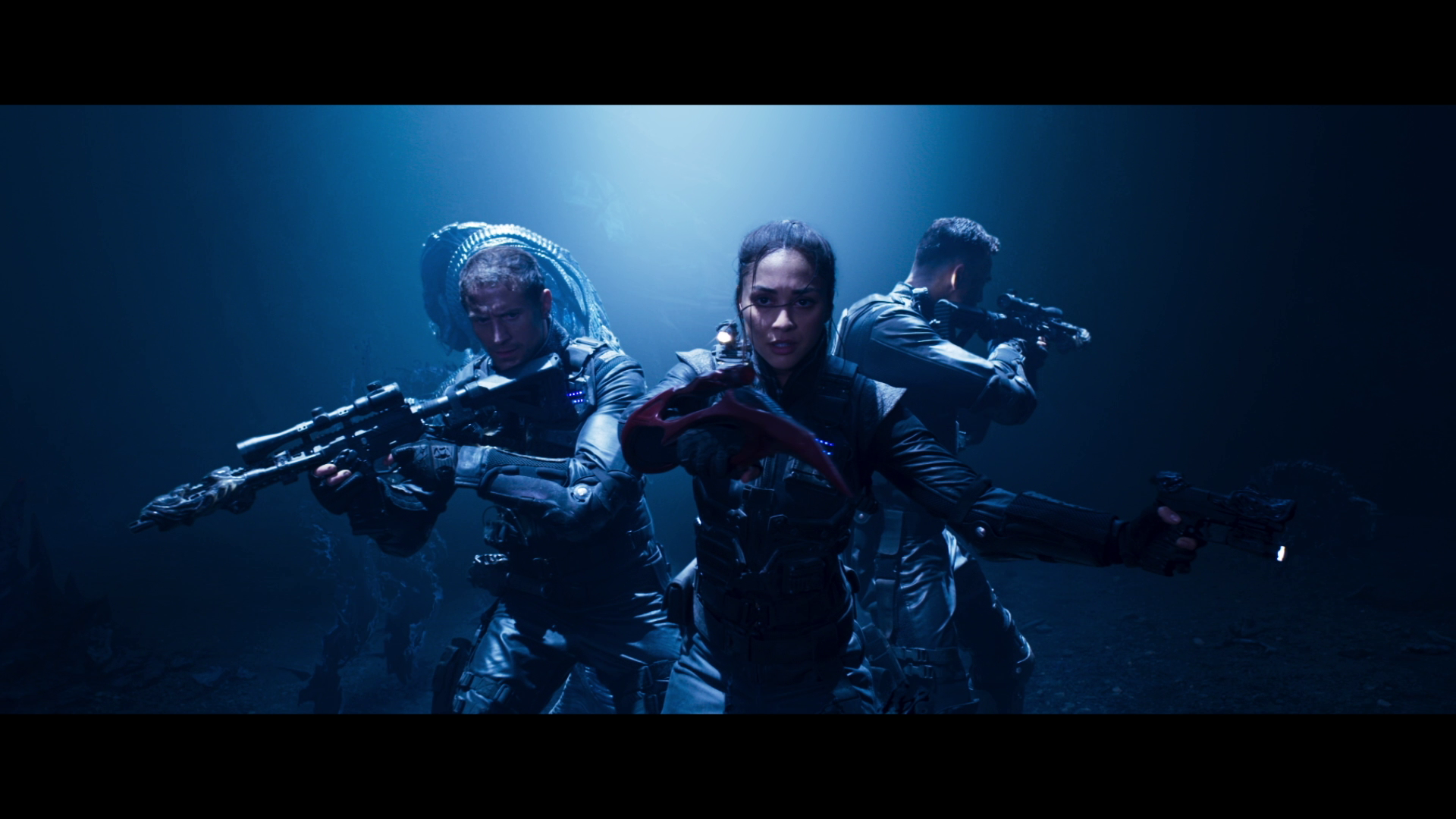 In the early going, Skylines shows some truly abysmal banding, inexcusable for Blu-ray, even questionable for DVD. Smoke and fog pose this issue constantly. Other than some noise, the plain digital cinematography looks fair elsewhere. Unimpressive, but clear. Cinematography veers toward softness so detail isn’t leaping from the screen. At best, texture is bland and flat.

Based on those digital tools, black levels favor a tint. Space looks inky, but most shadows dip to a deep navy hue. Contrast sports better purity, in particular the ship’s countless interior lights, or the engine flares. Against space backdrops, the pure white (with tint on the fringes) look great.

Given the scale suggested as alien ships take flight, the low-end energy doesn’t match. Subwoofer support, at best, is disappointing aside from a handful of brief surges. Low-end power does offer some rumble, if only to a marginal degree. Nothing causes the room to shake consistently.

Mixing does better work in terms of the surrounds. As the troop drops onto an alien planet, creatures chitter through caves, a pleasing echo/reverb enhancing the positional touches. Creature attacks stretch the front soundstage, paying close attention to both the surrounds and stereos. Gunfire is oddly more static, but does produce motion when at the extremes edges. For 5.1, it’s a wide, active track. Shame there’s so little to support this in the low-end.

A making-of reaches 24-minutes, and outside of the EPK plot recap, it’s insightful. Deleted scenes follow, narrated by commentary, and coming up just shy of 14-minutes.

The 15 unaltered images below represent the Blu-ray. For an additional 27 Skylines screenshots, early access to all screens (plus the 120,000+ already in our library), 120 exclusive 4K UHD reviews, and more, subscribe on Patreon.