A critically acclaimed and beloved film such as Cameron Crowe’s Almost Famous nets you a lot of leeway as director, especially after you follow it up with a successful box office performer like Vanilla Sky. If you ever wonder why a Hollywood studio often micromanages the creative process, look no further than Crowe’s mildly disappointing and uneven Elizabethtown. What sounds fun on paper is a ramshackle hodgepodge of half-baked ideas and underwhelming execution, less than the sum of its parts.

The 2005 flick stars Orlando Bloom and Kirsten Dunst at the heights of their A-list careers. The all-star cast includes turns by Susan Sarandon, Judy Greer, Alex Baldwin, Jessica Biel and Paul Schneider. Critics and audiences didn’t care for Elizabethtown’s messy screenplay and bewildering genre mix, which marked the beginning of the end for Crowe’s lofty reputation. While it’s not a complete mess, Elizabethtown could have turned out so much better with more care and judicious fine-tuning.

A high-profile shoe designer (Orlando Bloom) is on the verge of suicide after his design costs his shoe company, a thinly-veiled parody of Nike, a billion dollars in losses. Wallowing in his misery, Drew’s plans are interrupted when he’s hit by the news of his father’s death in Kentucky. Flying to his father’s home, Drew meets an airline stewardess that takes an interest in his problems.

The always-sunny Claire (Kirsten Dunst) helps Drew deal with his emotional crisis as the young man reconnects with relatives he barely knows and copes with the loss of his dad. Throw in some laughs stemming from Drew’s culture shock meeting his less sophisticated relatives living in Kentucky.

One gets the feelings that Crowe is digesting memories of his own relationship with his father in Elizabethtown. Crowe calls the movie a tribute to his father and includes a strange “travelogue” across America that the filmmaker likely wanted with his father before the man passed away. That sincere, personal feeling does shine through in the idiosyncratic screenplay, filled with quirky musical touches that is Crowe’s stock in trade as a filmmaker.

No one that catches Elizabethtown will forget the cheesy bird prop catching fire as Drew’s cousin’s band plays a cover of Free Bird. You either find that humorous or groan-inducing; there’s no real middle ground.

The biggest issue is that Elizabethtown never knows what it wants to be and rambles along. Marketed as a romantic comedy due to its headlining stars, that is not Elizabethtown’s core purpose. The fledgling comedy is more about Drew coming to grips with his father’s passing than anything else, though Crowe bends over backwards trying to force in the cute romance with Claire.

There is definitely not enough screen time for Dunst. Her Claire lights up the room and shares an easy romantic chemistry with Bloom. Instead we get lengthy passages focused on Drew’s angst and comically dealing with his dad’s overly friendly home town. A much tighter edit could have made this a really sweet, funny movie.

Elizabethtown isn’t a complete disaster but Crowe has proven he’s capable of so much more in his better movies. This wry comedy/romance/family drama attempts to be a jack-of-all-trades and ends up being master of none. Check out Elizabethtown for Kirsten Dunst and Orlando Bloom, not for Cameron Crowe’s largely ineffective writing. 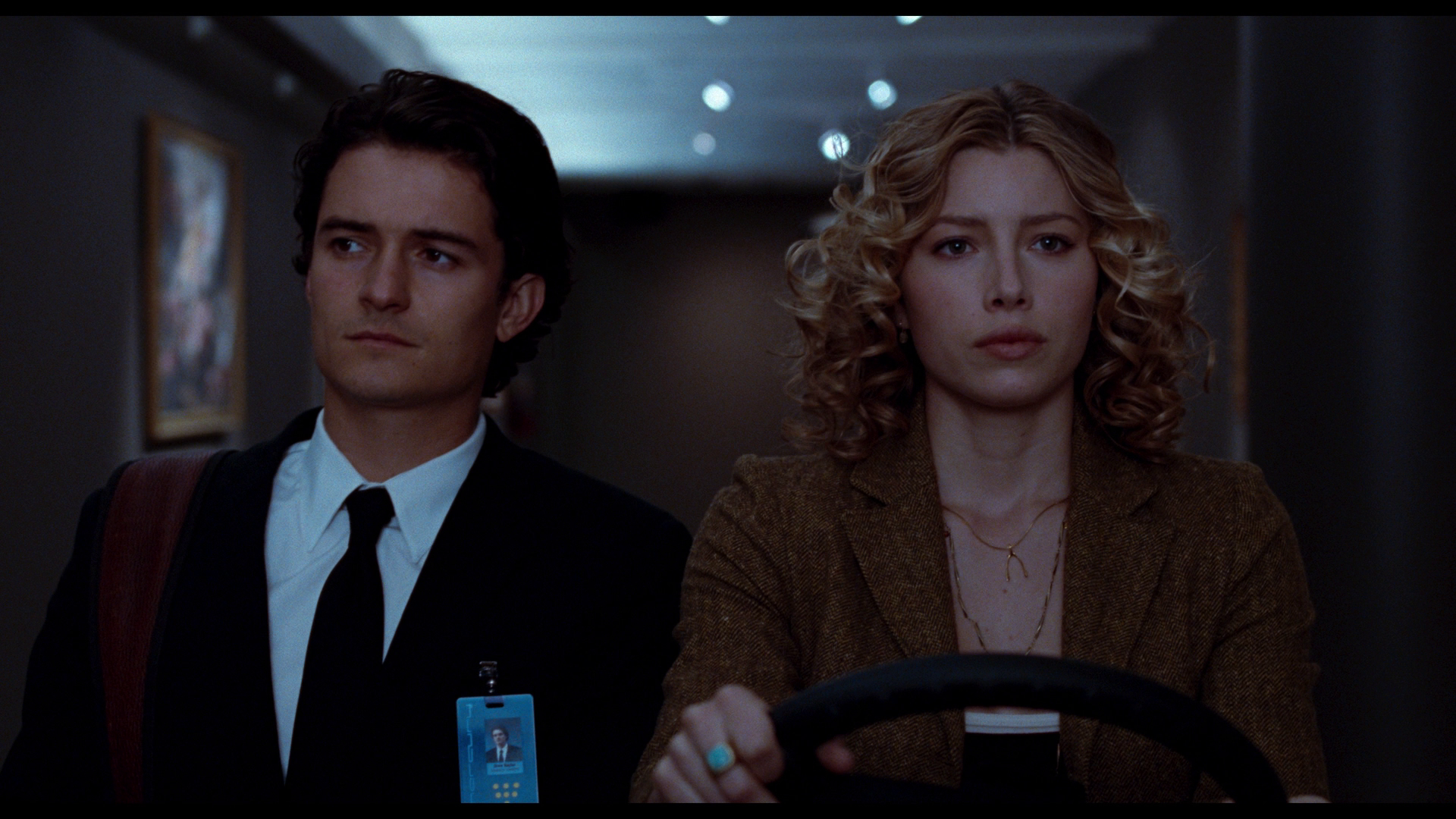 Paramount has been producing new 4K film transfers for most of their Paramount Presents line and writer-director Cameron Crowe has supervised one for this new Blu-ray edition. The new transfer is film-like, unfiltered and consistently pleasing in a satisfying 1.85:1 presentation.

Elizabethtown gets a new color correction with better saturation and a tighter contrast over the decidedly ancient DVD transfer. Black levels hold up nicely with inky depth and shadow delineation.

However, Elizabethtown wasn’t filmed with tack-sharp definition and razor-sharp detail. There are decidedly soft stretches despite the solid clarity and pristine elements. It’s an organic film scan with healthy colors from the camera negative that highlights the rather ordinary cinematography. Probably the best Elizabethtown can look but no one will be wondering why Paramount passed on a 4K UHD set.

Dialogue is intelligently reproduced with the various pop recordings dominating when present. There are a couple of decent scenes with immersion-inducing awareness. It’s a real buzz hearing the hissing insects in the Kentucky exteriors.

Part of the relatively new Paramount Presents line, Elizabethtown is numbered 14 in the home video reissue program on Blu-ray. Surprisingly enough, this is the first time the 2005 movie has hit Blu-ray. This disc carries over all the special features found on Paramount’s original DVD. A new Filmmaker Focus featurette sees director/writer Cameron Crowe discussing the movie’s background and production.

The included digital copy redeems in HDX quality on either VUDU, iTunes, or FandangoNow. Elizabethtown arrives with an impressively glossy, fold-out slipcover and a clear case, now standard for the Paramount Presents line.

Filmmaker Focus: Cameron Crowe On Elizabethtown (06:22 in HD) – The filmmaker partially defends his film from critics, among other choice topics.

Deleted and Extended Scenes W/ Introduction by Director Cameron Crowe (23:49 in HD) – Eight scenes, including an alternate ending that might have worked better if it had been more fleshed out.

On the Road to Elizabethtown (13:49 in SD) – Original DVD featurette with cast and crew discussing the film’s themes with a look at locations and other topics.

The Music of Elizabethtown (05:32 in SD) – Cameron Crowe discusses making musical choices for the film.

The 15 unaltered images below represent the Blu-ray. For an additional 31 Elizabethtown screenshots, early access to all screens (plus the 120,000+ already in our library), 120 exclusive 4K UHD reviews, and more, subscribe on Patreon.