When considering the whole of modern animated movies, and the litany focused on coming together to conquer a common goal, it’s a wonder if that message isn’t getting through or it’s easily disposable (like so many studio-produced cartoons).

That’s The Croods and Croods: A New Age, stories of family bonding, understanding, and acceptance. These movies feel familiar because they are, or maybe because no one seems to get it as they exit the theater (or in this case, leave the couch given the release date). Trying to force the issue might be the only way this penetrates a divided society.

Croods: A New Age shows no aspiration to try anything daring

There’s no defending Croods: A New Age on anything aside from its looks and energy. In terms of story, the redundancy is tiresome, if not for kids still new to this stuff. Croods has characters worthy of a franchise (and merchandising), the freshness in this sequel stemming from another family.

The not-subtle named “Bettermans” represent an evolved intelligence, smug and modern, insofar as early man qualifies as such. Through them, Croods: A New Age circles overprotective parenting and feelings of superiority. By the end, of course, each side finds the means to work as a unit to save themselves, all biases removed.

Croods: A New Age isn’t boring. Ever. It’s too fast, and the comic mania doesn’t wobble. Visual gags help alleviate any dullness in the plotting, while those expected new additions fit into what Dreamworks undoubtedly turns into an extended franchise. Divisions remain, one side seen as uncivilized, the other revoltingly pompous. That’s enough to push forward, charming in its simplicity, broken down in a way that kids can see the judgment and perception adults have toward one another. That’s a positive, and other than smelly feet, humor remains pleasingly free from toilet gags – an actual “clean” toilet sequence aside.

Like too many contemporary offerings in western animation, Croods: A New Age shows no aspiration to try anything daring. Also like too many, a number of 2D side stories create a “what if,” creatively inspired unlike the ever-evolving technical theatrics. Gorgeous, but then again, not many in subsequent computer generations fail to impress in this way. There’s some irony in thinking this is better, ignoring the old ways, while telling a story about realizing the value in both. 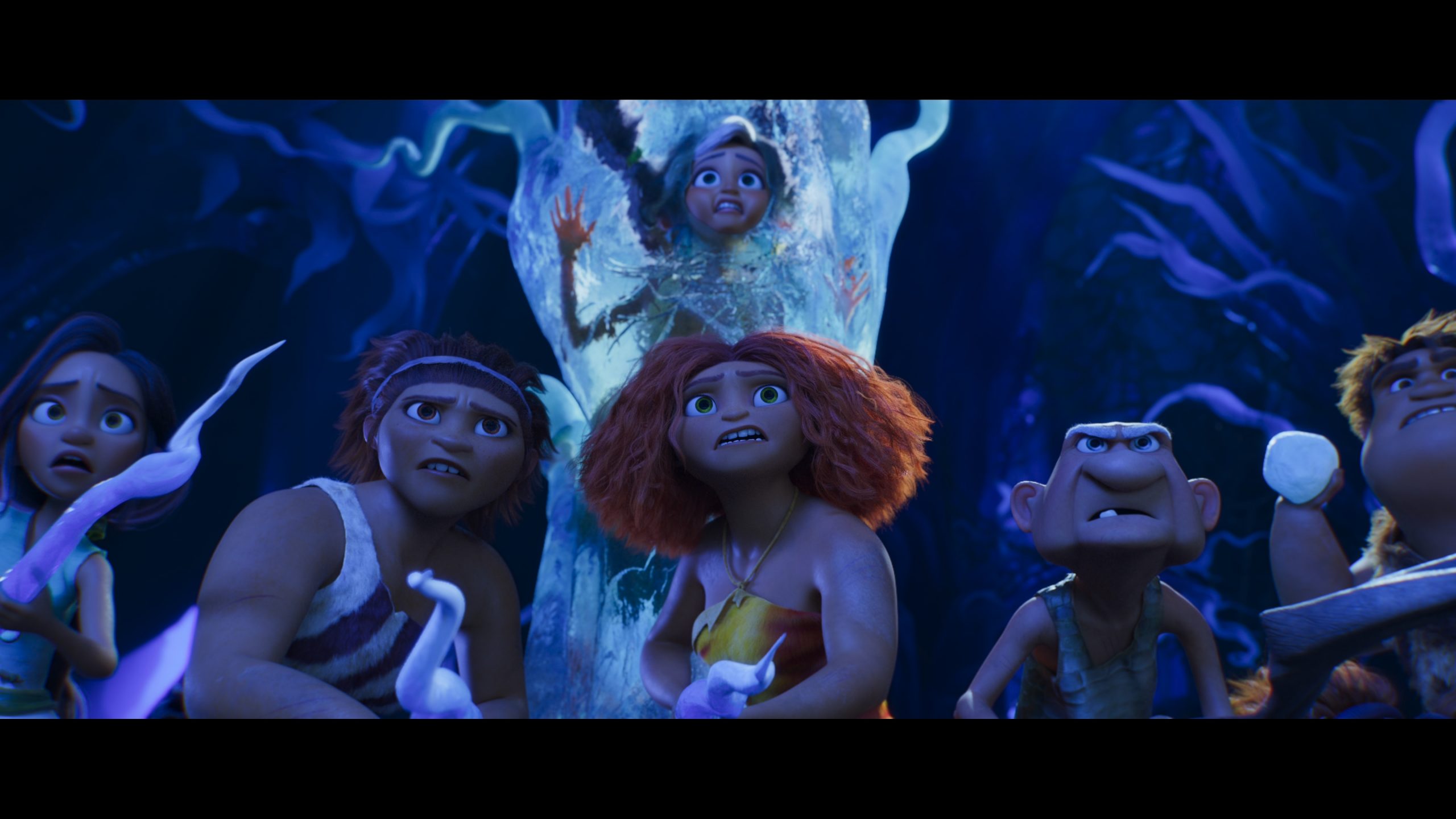 Oh the color. The brilliant, bright, vivid color. And so much of it. Croods: A New Age uses a variety rare even in animation. Grasslands, lava, water, sunsets, monsters… it’s just endless Dolby Vision splendor. Every scene is worth framing. When the family arrives in a new land filled with flowers, butterflies, and whatever else expands the palette, that’s almost certainly UHD’s new “wow” moment.

Aided further by the DV, lovely contrast gives this animation bite and depth. Things like fire glow intensely, alongside sunlight and lava flows. Even at night, the awesome lighting keeps a wow factor working into the mix. There’s not a visually dull moment.

Croods: A New Age defies any reservations regarding resolution. Certainly rendered at 2K, that’s no matter. Hair and fur details look incredible, a little aliasing and minor noise aside. Lush grasslands/weeds equally define themselves. There’s even skin texture, a testament to the source. Magic. All of this.

Using the rears frequently, activity swells in each channel. Without fear, voices stretch between the available speakers. There’s no subtlety, and that’s no complaint. Accuracy is sublime. Action stretches into every speaker, perfectly utilizing the Atmos soundstage to its fullest – overheads aside. They hardly factor in.

There’s not much range on display however. The low-end dulls, whiffing on its power. Drums and angry monkey punches push some bass, if limited. Fine, but minimal. At the climax, a mega ape charges around, and still the LFE disappoints. Smashing rocks, crushing walls, and still almost nada.

A couple Croods shorts, animated in 2D, run a few minutes each. There’s an unrelated short titled To: Gerard, just over seven minutes long. It’s great. The voice cast makes fools of themselves for two minutes in a gag reel. Eight deleted scenes come with intros by director Joel Crawford, totaling 23-minutes. A cast featurette makes it a bit past eight minutes, and a general making of hits the 10-minute mark. Some kids stuff (drawing lessons, recipes) come before a commentary in the menu, the latter featuring Crawford, producer Mark Swift, story lead Januel Mercado, and editor Jim Ryan.

The Croods: A New Age

The Croods: A New Age doesn’t aim to try anything new, but tells a familiar story in a fun, expedient way.