Hot Town, Summer in the City

It’s sweltering in Brooklyn. The heat is physical, the sweat real. Do the Right Thing treats city sun as secondary, because the 100 degree air boils what’s already simmering on the ground. In that, Spike Lee will unlikely ever match up to such a pertinent, revoltingly truthful, honest story.

Lee’s work varies between antagonistic, heartfelt, and honest; Do the Right Thing represents the only the latter two because it’s such a beautiful and grotesquely authentic snapshot of inner city melting pots. Do the Right Thing is only one block, yet representative of a whole American culture. Italians, Koreans, whites, blacks. Among them, the disabled, the addicts, old, young, the mothers, fathers. The sharp balance between them draws uneasy truces and no sympathetic eyes. Much as everyone speaks of being better, doing right, and respect, none is ever shown. If it is, soon there’s a backroom conversation splintering the veil through racial slurs.

Do the Right Thing hasn’t dated itself a day

Do the Right Thing’s potent moment happens midway through. The camera zooms on Lee and co-stars, each unleashing a litany of derogatory terms in earnest. These go unspoken; it’s what each wants to say to express their hatred, blaming one another for their problems. For two minutes, Do the Right Thing puts loathing on high volume, uncomfortable because this is an admission of resentment, and a wish for revenge.

Because racial issues again peaked in 2020, Do the Right Thing feels like a horror movie. Police patrol the neighborhood. Knowing the tone, message, and theme, Do the Right Thing becomes a question of who and when will meet an early end. It’s brutal to think of the inevitability, and how easy it’s accepted. Over 30 years on, the continued relevance is distressing, because beyond the music and fashion, Do the Right Thing hasn’t dated itself a day.

This is Spike Lee’s masterwork, genuine in its conflict, even confusion. The final text before the end credits displays two contrasting quotes from Malcolm X and Martin Luther King. Like the characters, each contains separate thoughts on how to solve social discrepancies. Technically, a riot destroying an Italian business happens when the owner refuses to put up pictures of black leaders. In reality, that was a spark in a back-and-forth, noxious dialog where those involved curl up into their corners, making the tiniest thing ignite emotions.

Death results. Then remorse. More anger. A reset. No one solves anything, just makes a footnote in history where the victim fades into a number, and tensions wait until the next unforgiving summer day. Those days comes too often. 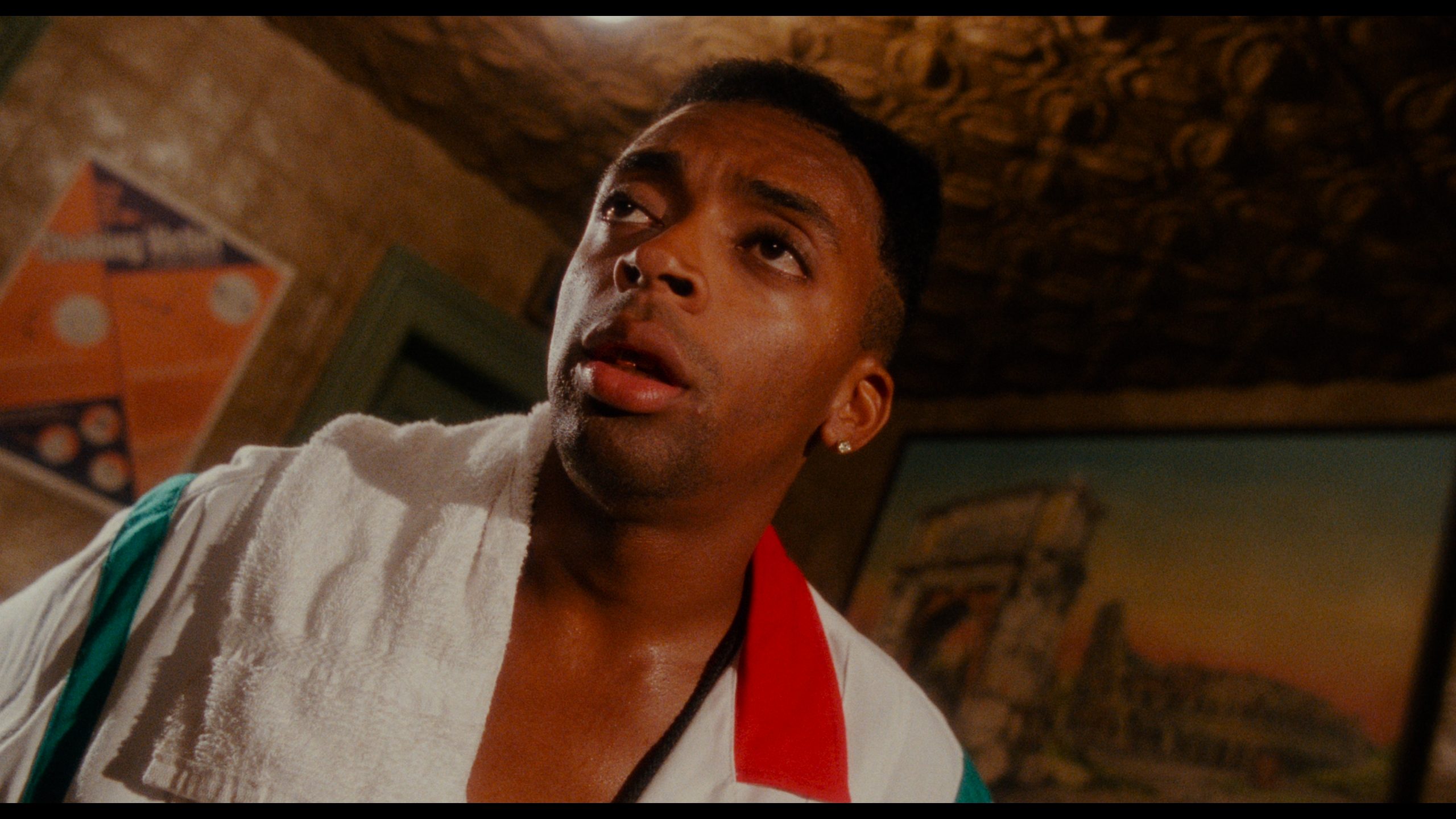 Appropriately filtered through a hefty orange to simulate the heat, color follows that monochromatic vibe. It’s not that primaries don’t stick out – they do in places – but the focus is purely on simulating summer sizzle. Deep color makes this readily apparent, while emphasizing the other tones where possible.

A pure 4K scan is the real highlight. Universal’s master naturally sharpens the imagery, bringing out details in the sets, city streets, and facial texture. Beautiful grain structure doesn’t suffer any compression faults, letting Do the Right Thing stretch across the screen faultlessly. Steamier cinematography doesn’t fall apart either. There’s not a spot left on the print either; no scratches or dirt anywhere.

Graced with HDR, sunlight reflects off surfaces, pushing up contrast gloriously. Brightness isn’t spared, and neither are black levels. Shadows hit absolute black, creating awesome dimension. Like the rest of this transfer, it’s all consistent and perfect.

Opening with “Fight the Power,” it’s appropriate given the DTS:X track’s strength in the low-end. Not only fantastic in clarity, but room shaking capability too. A duel between two boomboxes is spectacular. There’s no age evident on this track anywhere. Pristine dialog sounds totally modern, as if recorded yesterday.

Cars pass on the street, stretching the soundstage a bit to give the scenery life. Water from a fire hydrant sprays throughout, creating a chance for the heights to work. It’s natural enough to sound as if Do the Right Thing always used this mix.

Spike Lee provides two commentaries, the first for the 20th anniversary, the other even older, alongside director of photography Ernest Dickerson, production designer Wynn Thomas, and actor Joie Lee. From 2009, Spike Lee brings together the crew for a 20th anniversary screening/featurette that runs 35-minutes. Eleven deleted/extended scenes reach 14-minutes. A behind-the-scenes look splits into five parts, nearly reaching an hour. It’s full of live set footage and rehearsals. An additional making-of goes past an hour and broken into multiple parts.

Editor Barry Brown talks about the film and working alongside Lee for nine minutes. A storyboard gallery of the riot is introduced by Lee. Cannes ’89 runs over 40-minutes, the actors and crew featured as they speak on a panel.

Do the Right Thing