Docking She’s the Man for its predictability and routine goes in denial of the intended audience who doesn’t know the predictable and routine; teens don’t have that perspective, short of the true movie hounds. Likely, they don’t know Shakespeare either, which She’s the Man retcons.

On that note, She’s the Man is likely the only blending between Shakespeare and Air Bud. Say this movie isn’t creative, but find another so bold as to cast Vinnie Jones as a soccer coach, tearing up the rule book when the opposition says a high school girl can’t play on the boys team. If a golden retriever can step onto the field, so too can star Amanda Bynes.

She’s the Man is upfront regarding its intentions. The first scene shouts the gender equality theme right into Bynes’ (and viewers’) face. Now 15-years-old, in a time when the US women’s soccer team fights for their actual value, She’s the Man doesn’t feel out of place – other than the obvious pop soundtrack and dated editing flair.

A lot is asked of Bynes, hiding her gender, ineffectively to anyone with eyes who isn’t a character in this movie. Mimicking her twin brother, the usual gender swap cliches include showers and awkward nudity. There’s a “date” involving a friend and shared headsets to make Bynes’ “man”nerisms seem cool. It’s a skit practically as old as movies themselves. But, Bynes sells it. Same with a carnival sequence where Bynes needs to switch clothes and outfits to keep her secret. Again though, Bynes carries the humor.

It’s not only Bynes either who spends She’s the Man challenging gender norms. Channing Tatum does too, shedding the testosterone sports freak mindset during a nighttime chat with Bynes. He’s not upfront about it, nervous someone will discover that softer side, but at least accepts – eventually – that’s okay to show. Imagine She’s the Man as high school date material, and the film works.

The generic “something for everyone” studio approach feels right, and the directness within the script ensures the message isn’t missed. Imperfect, notably dabbling in homophobia, but within range for the decade to qualify as progressive in its thinking. She’s the Man didn’t change the dialog, but represents broader conversations from that time. As sports grow closer to closing these gaps, She’s the Man will become archaic. Until then, it’s a farce, but with purpose and a point. 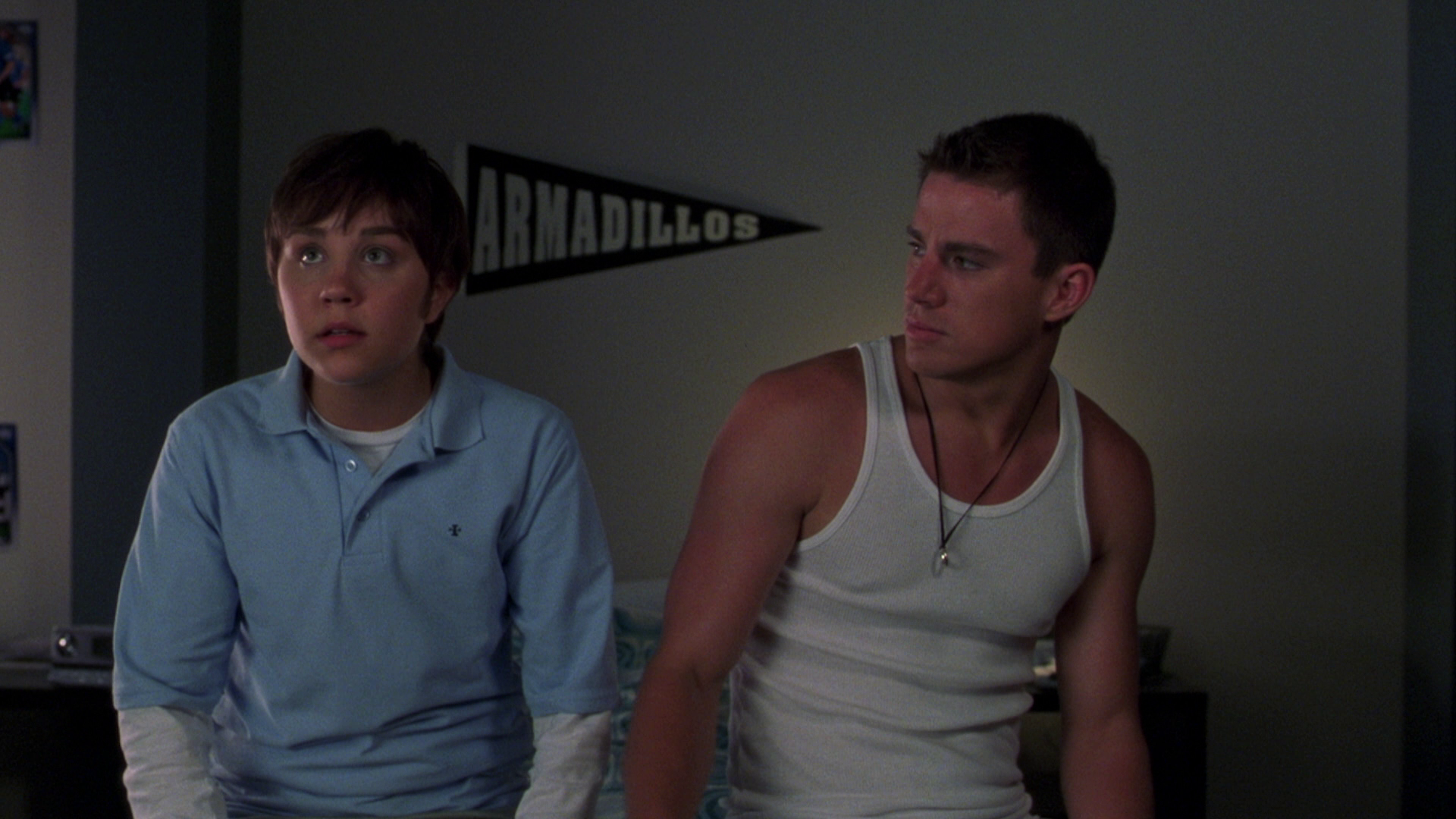 Debuting on Blu-ray, Paramount doesn’t do much to the master for this presentation. A bit of dirt/dust on occasion barely matters, but the mundane sharpness dries up potential detail upgrades. Softened grain resolves decently via the encode, if to limited effect. Texture wanes even in close, the upgrade from DVD marginal, and mostly reserved to better compression.

It’s colorful at least. She’s the Man dumps primaries in droves. Sports uniforms glow when on screen. Great saturation coats every frame, grass a brilliant green, flesh tones spot on accurate. For a teen comedy, the aesthetic is Candy Land-esque.

Contrast likewise proves perky and intense. Rather pedestrian cinematography doesn’t utilize anything complex, lighting routines bland as to not involve deep shadows too often. When used though, they drop to pure black. In the final scene, those black levels prove themselves during a nighttime meetup.

The pure mid-’00s soundtrack blows up the dynamic range, loud, not skimping on bass. There’s a superb dream sequence too, hitting the subwoofer as players slam into each other or hit the ground.

DTS-HD spreads the soundstage a bit when in bars, during parties, and at a carnival. Ambiance isn’t spectacular, but sufficient. On the soccer field, some motion runs from the fronts to rears where possible. Given the genre, it’s more movement than expected.

In the extras menu, a decidedly mid-’00s making of that runs for 15-minutes. A promo bit for the cast makes it nearly eight minutes. In four minutes, the Shakespearean elements are dissected. Bynes and Leslie re-team for optional commentary over nine deleted scenes totaling 11-minutes. The gag reel holds some gems at just over four minutes. A music video and trailer finish this one off.

Ridiculous as it is, She’s the Man knows the target audience and hones in on a progressive ideal that seems closer to reality today.

The 15 unaltered images below represent the Blu-ray. For an additional 24 She’s the Man screenshots, early access to all screens (plus the 120,000+ already in our library), 120 exclusive 4K UHD reviews, and more, subscribe on Patreon.