Archenemy is a wild, incoherent mess. Attempting to capitalize on the exploding popularity of superheroes on the silver screen, star Joe Manganiello (True Blood) is cosmic superhero Max Fist from the planet Chromium. A bizarre alchemy of gritty street violence and cartoonish storytelling, Max’s backstory is told through nearly incomprehensible animated segments.

Director Adam Egypt Mortimer’s take on the genre is severely limited by the indie film’s low-rent production values. There are good reasons why superhero blockbusters are only made by Hollywood’s biggest studios. It’s hard making convincing superheroes on a shoestring budget.

Max Fist (Joe Manganiello) is a local homeless man claiming to be a former superhero from Chromium. Living on the streets, Max tells his story of lost powers and falling through a dimensional rift to local teenager Hamster (Skylan Brooks). Max’s mortal archenemy is the deadly Cleo Vantrik (Amy Seimetz). Hamster mostly takes interest in Max because the youth is making viral videos for some website. Hamster and his older sister (Zolee Griggs) get in trouble with vicious criminals led by the local crime lord, The Manager (Glenn Howerton).

Most everything about Archenemy has little depth and comes off as highly amateur filmmaking. The actors look like they are having fun, which is about the only compliment you can pay it. Comedic actor Paul Scheer (The League) goes wildly over the top in a small role as a crazed thug. To his credit, Joe Manganiello shows some self-awareness in his ridiculous role of homeless street bum turned merciless vigilante hero. He mugs for the camera with a relish reserved for an actor that actively knows he’s making a bad movie. You get the feeling Manganiello badly needed a paycheck when signing up for Archenemy.

The awkward animation, shoddy visual effects and strange plot-holes make for a messy combination. The premise isn’t entirely without merit but something went wrong along the way in filmmaker Adam Egypt Mortimer’s vision for Max Fist. Archenemy isn’t the next Avengers or Batman. Go read some comics before you become desperate enough to watch this turkey. 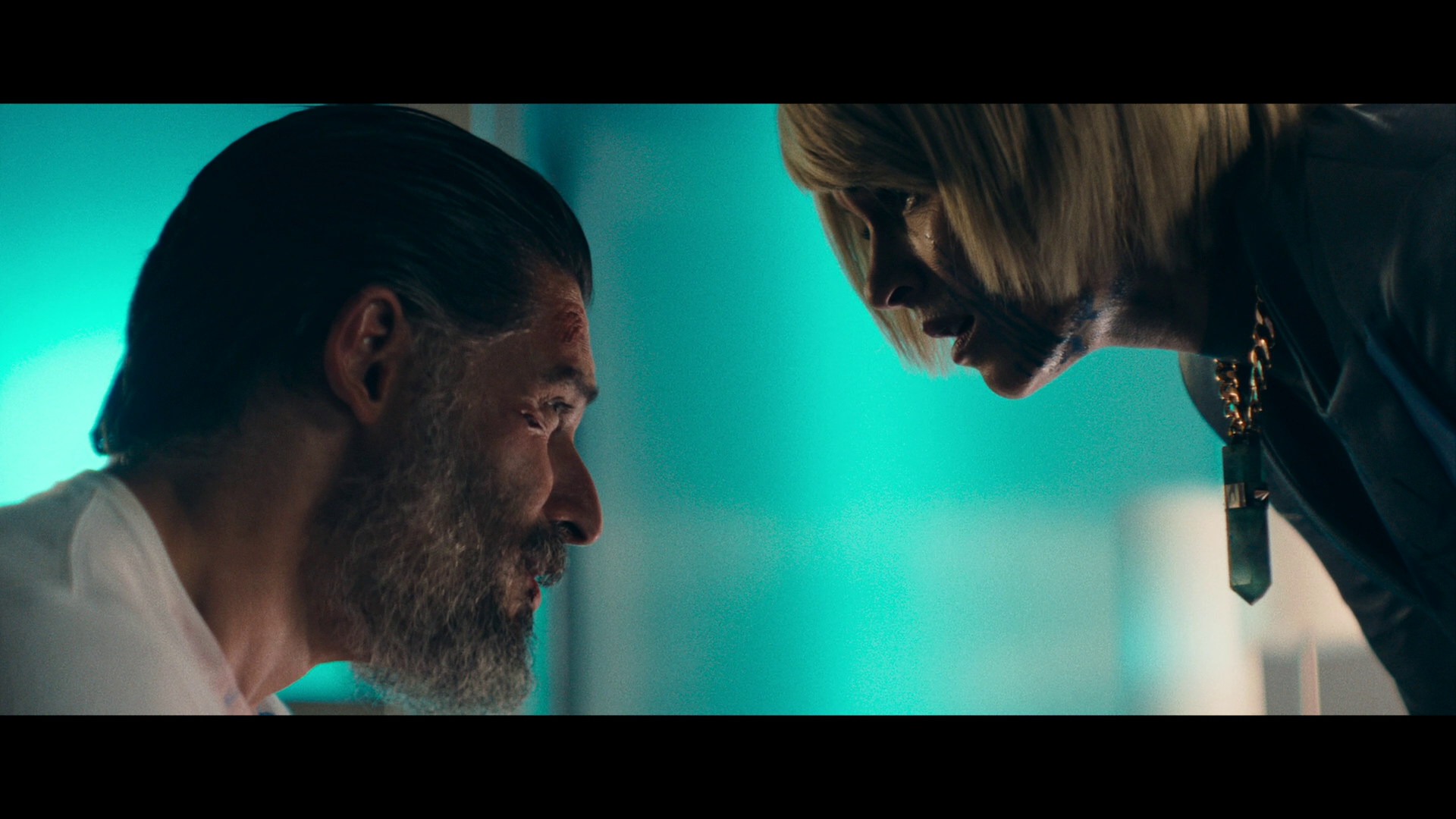 The 2.39:1 presentation is serviceable on Blu-ray, only highlighting limitations inherent in the stiffly animated sequences. Like most indie films these days, live-action scenes are shot with razor-sharp definition and clarity. RLJ Entertainment provides a clean, crisp 1080P transfer presumably derived from the film’s so-so looking digital intermediate. The main feature runs at fairly impressive AVC bitrates on a BD-25 without noticeable artifacts.

The low-budget VFX and animation don’t mesh well with the regular footage. That creates an uneven viewing experience best forgotten.

Archenemy gets a solid surround mix with tight bass response and decent immersion. The 5.1 DTS-HD MA audio is heavily discrete during the action sequences with nice separation between channels. The problem is a loud, overly annoying score hampered by the compressed dynamics. Archenemy’s sound design is clearly limited by its budget despite the obvious sonic impact.

RLJ Entertainment provides a slipcover available on first pressings. With its attractive artwork, the slipcover may be the only cool thing about this entire release. The disc is supposedly Region A.

The Making Of Archenemy featurette (06:53 in HD) – Several cast and crew members appear in this slickly-made and fluffy featurette, including actors Joe Manganiello and Amy Seimetz. Joe Manganiello has to be having fun with his interview – he makes ridiculous claims lampooning method acting for his role as a homeless man.

A wild, violent superhero mess made with shoddy effects and half-baked storytelling.

The 15 unaltered images below represent the Blu-ray. For an additional 33 Archenemy screenshots, early access to all screens (plus the 120,000+ already in our library), 120 exclusive 4K UHD reviews, and more, subscribe on Patreon.