It’s remorseful toward science. In the final scene, inventor Professor Nakazato (Chizuru Kitagawa) apologizes for his formula. His brief speech is not far from Oppenhiemer’s own words after his discoveries cost so many lives and ushered in a new global era. Science must keep advancing, but be aware of the potential cost. Universal’s Invisible Man series often derided such endeavors but broadly. Daiei’s take speaks to an unnerved nation, if without catching the eye of western censors.

Invisible Man Appears doesn’t necessarily fault the invisibility serum alone. While driving those afflicted toward insanity, the cause of the ensuing chaos is greed. Centered around valuable jewels, both the unscrupulous seller – holding their goods in anticipation of a greater payday – and the criminals seeking to steal the lavish necklace put pressure on a student to swipe the item. Promised a cure, the now unseen man turns selfish, uncaring, and psychotic. It’s not the science, rather how it’s used and impacts society.

Better to explore Invisible Man Appears for its thematic value given the pedestrian storytelling. Notable for featuring Eiji Tsubaraya’s (then blacklisted by studios) special effects prior to his Godzilla work, the trick photography easily matches that done at Universal. That’s likely why Invisible Man Appears holds interest in the States, an unseen oddity previously unavailable until this Blu-ray. The lack of import/export prior isn’t surprising given what little Invisible Man Appears offers.

There’s one memorable element to this sub-genre adaptation, that being the clever use of first-person camerawork. While the dull, plain, familiar manhunt (and plodding love triangle) develops limited characterization, making the camera mobile means there’s a possibility the title character is listening in or watching silently. Even certain attack scenes play out directly in front of the camera, forcing the audience to watch as if committing the violence themselves. Such uncertainty proves advantageous to a copycat script, notable only for its ability to outwit the occupation’s industry suppression. 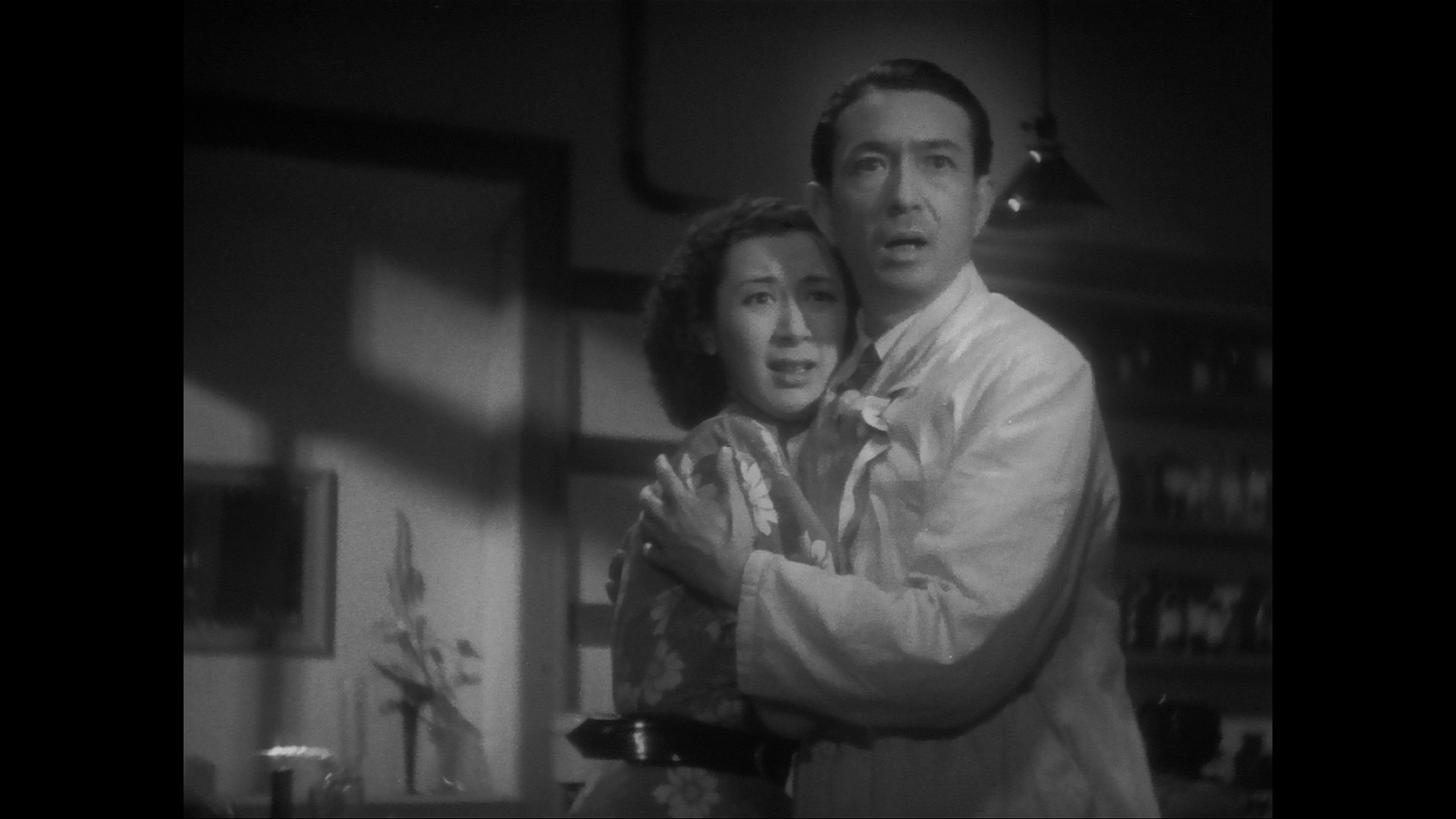 When a disc opens with a “best available materials” message, it’s usually trouble. So it is with Invisible Man Appears. Sourced from a 16mm release print, this jumpy presentation doesn’t settle down. Gate weave constantly makes the print shudder. Years took their toll too, leaving dust and debris behind. Scratches inevitably intrude too.

Arrow tried to some degree, using filtering as indicated by the murky, oily appearance. This reduces grain at a cost, and while not obliterating detail, certainly saps much of the life. All things considered, it’s a reasonably sharp presentation, suggesting a recent scan at least, preserving Invisible Man Appears with stable resolution

Muddy gray scale affords the disc limited dimensionality. On occasion, contrast clips whites, or hovers near enough toward the issue as to blot out most detail anyway. Flickering (sometimes severe) further causes the black & white cinematography to wane.

While most of those issues persist, the final reels show notable improvement. Jumpy and scratchy, still lacking in gray scale, but grain structure improves its form. Detail rises too. For this disc, it’s a savior, and a splendid (if flawed) finish.

Equally withering like the video, music collapses in clarity, so harsh at peak treble as to make the PCM track hard to tolerate at typical volumes. It’s nails-on-a-chalkboard in pitch.

No surprise then the dialog sounds parched too. Audible, but coarse. Between the two, sound effects succeed more so than the music, but the match-up is nearly a tie.

Kim Newman offers thoughts on the film, and the “invisible” sub-genre as a whole, speaking for nearly 25-minutes. There’s also an original trailer, then an image gallery.

Sought after as an early example of Japanese tokusatsu films, Invisible Man Appears is interesting only for its moves to outwit censors.

The 15 unaltered images below represent the Blu-ray. For an additional 31 Invisible Man Appears screenshots, early access to all screens (plus the 120,000+ already in our library), 120 exclusive 4K UHD reviews, and more, subscribe on Patreon.