Love Story is the box office success that saved Paramount Studios from irrelevancy in 1970 and paved the way for movies like Chinatown and The Godfather. Nominated for seven Academy Awards, the elegant tearjerker struck a huge chord with young Baby Boomers growing into adulthood. Director Arthur Hiller’s tender movie stars Ryan O’Neal and Ali MacGraw as young lovers that overcome their vastly different backgrounds in finding happiness.

Considered by many one of Hollywood’s greatest romantic accomplishments, it’s hard to understate the film’s cultural impact at the time. Thanks in large part to Love Story, Jennifer became the most popular name for girls during most of the Seventies. Author Erich Segal novelized his screenplay before the movie was even released, becoming a massive bestseller. Stars Ryan O’Neal and Ali MacGraw became household names overnight, instant movie icons.

Studying to be a lawyer at Harvard as an undergrad, Oliver (Ryan O’Neal) meets the plucky Jennifer (Ali MacGraw) from nearby Radcliffe. Coming from different class backgrounds, the sophisticated and well-heeled Oliver becomes smitten with the spunky music student from a working-class Catholic family in Rhode Island. Despite trading sharp barbs, the romantic chemistry between them is palpable and soon they fall into a relationship.

The tension in the relationship mostly stems from Oliver’s father, a wealthy investment banker that clearly disapproves of Jennifer’s humble beginnings. Ray Milland does a brilliant rendition as the stern, distant father. It’s a critical piece that adds so much texture and nuance to Oliver’s character development. Their love overcomes the father’s disapproval when tragedy soon strikes.

Love Story is a perfectly made romance by Arthur Hiller from an air-tight screenplay that avoids excessive melodrama. Many lead actors turned down the role but it’s hard imagining anyone but Ryan O’Neal as Oliver. He shares amazing chemistry with Ali MacGraw and their easygoing banter is effortless.

The tragic tale is a cinematic experience where almost everything works together in timeless harmony. Eloquently capturing the zeitgeist of its times with a fresh voice on love and marriage, it’s easy seeing why Love Story became a box office sensation. The haunting score, instantly recognizable by a few piano keys from its memorable theme, is mere icing on the cake. More human and relatable than most romantic tearjerkers, Love Story encapsulates tragic romance with an uncanny eye but a tender touch. 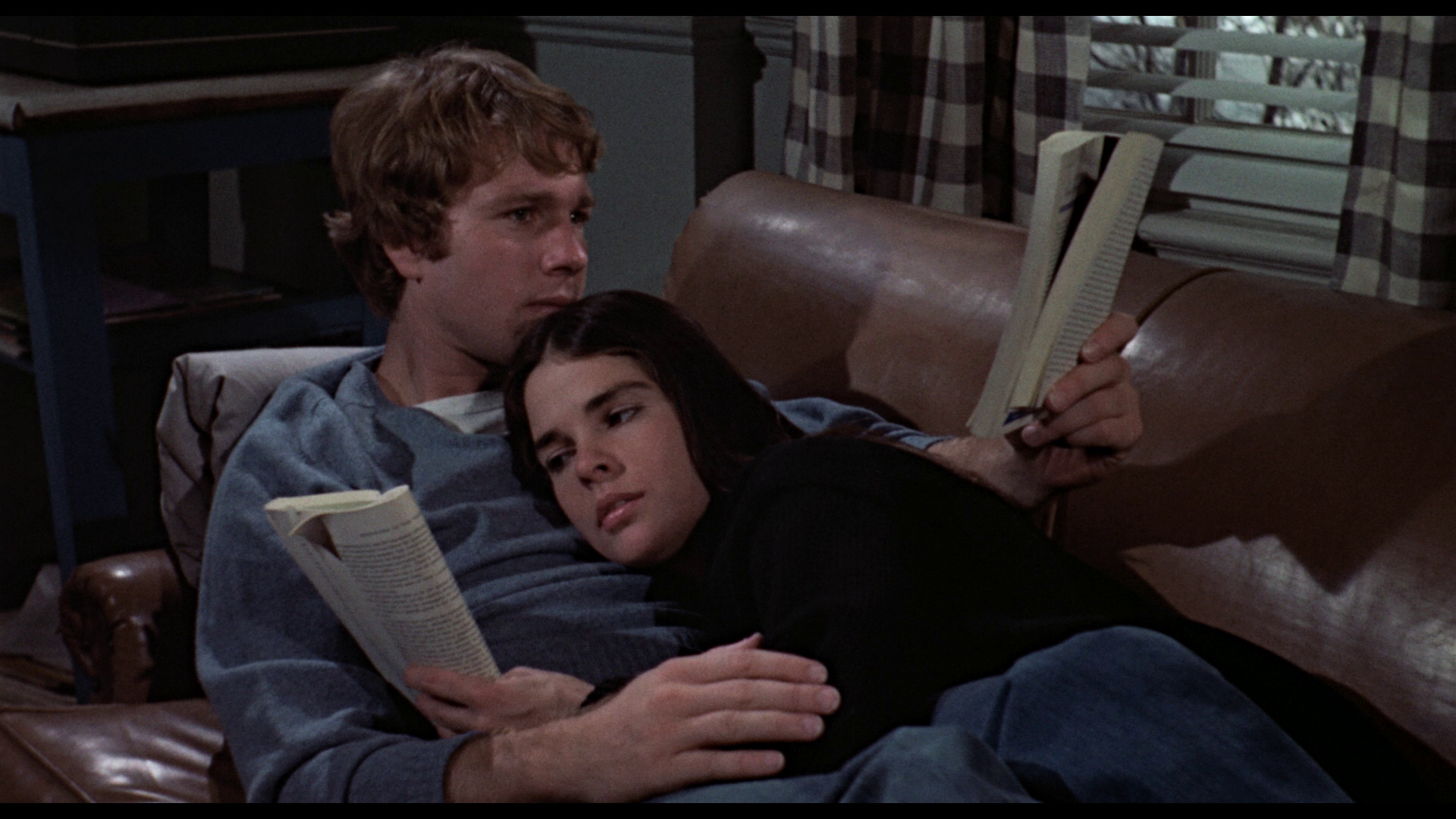 Paramount does it again with a beautiful new film transfer that should be released on UHD. Newly restored from a meticulous 4K scan of the original camera negative, Love Story finally looks fantastic on Blu-ray. Throw away the older 2012 Blu-ray or pawn it off on a friend; that disc is now obsolete.

Receiving a lush, organic 1.85:1 presentation with completely authentic textural detail, Love Story reveals impressive definition. I was blown away by the expertly-managed grading and restoration. The grounded color palette is backed by a beautiful contrast and rich black levels. There is no doubt this is the best Love Story has ever looked, including its first-run theatrical prints.

The 4K film transfer is immaculate without visible processing. The film-like video screams depth and projection. Close-ups have stunning levels of fine detail. This is a new standard for Seventies’ films on Blu-ray.

Both the original mono soundtrack and 5.1 surround audio have been decently remastered with a slightly fuller sound quality. The 5.1 DTS-HD MA audio is fairly smooth with pleasing fidelity, though it is mostly limited to the front soundstage. French composer Francis Lai’s Oscar-winning score and beautiful theme receives most of the benefit in the more expansive surround mix. The dynamics are moderate with effective bass. Nothing sticks out as especially noteworthy regarding the sound quality.

The dialogue-driven drama has naturalistic audio design with minor fill and ambient presence. Dialogue exchanges are crisp with a hint of mild strain in a few isolated scenes. Minor limitations can be detected in the original recording. The 2.0 Dolby Digital mono soundtrack is less impressive, given its reduced impact and soundstage.

Love Story is released as #15 in the Paramount Presents Blu-ray line and doesn’t deviate from its familiar trade dress. The new edition easily bests the original BD release with far superior audio/video quality, a collectible slipcover, and a new featurette by Leonard Maltin. It also keeps director Arthur Hiller’s commentary from DVD. There is zero reason to keep the old disc around.

The included digital copy redeems in HDX quality on either iTunes, VUDU or FandangoNow.

Filmmaker Focus: Leonard Maltin on Love Story (06:26 in HD) – The only new featurette has Maltin delving into producer Robert Evans’ story behind the scenes, casting girlfriend and future wife Ali MacGraw as Jenny.

TCM Introduction by Ben Mankiewicz (03:28 in HD) – The familiar film critic and historian from TCM offers up a short critique introducing Love Story.

Commentary By Director Arthur Hiller – Ported from the 2001 DVD, Hiller analyzes the movie’s broader themes while sharing important anecdotes from behind the scenes. It’s an engaging, thoughtful commentary from a man proud of his work.

Love Story: A Classic Remembered Featurette (14:51 in SD) – Ported from DVD, this featurette is largely director Arthur Hiller discussing the production in an interview.

One of Hollywood’s most acclaimed and successful romantic movies ever, the captivating tale of love and tragedy avoids sentimentality for its timely appeal during the 1970s.

The 15 unaltered images below represent the Blu-ray. For an additional 39 Love Story screenshots, early access to all screens (plus the 120,000+ already in our library), 120 exclusive 4K UHD reviews, and more, subscribe on Patreon.