Loosely based on real world history, the issue for Stranglers of Bombay is finding a hero in a gruesome period, but this movie doesn’t, held together Guy Rolfe who wants to put finding people above recovering goods. Even then, Rolfe is a British Colonialist, suppressing India through monopolized trade.

As a genre offering in Hammer’s horror line, its works. Stranglers of Bombay makes its cult particularly vicious and cruel. They murder family, and believe fully they will receive rewards from their god Kali. At times explicit, gore is prominent, and the screams piercing as failed cultists lose their eyes.

Rooting for anyone in this ugliness leaves Stranglers of Bombay confused

That’s uncomfortable in the right way, making audiences fear such bloodshed. Then Rolfe knocks Muslims during their morning prayer, writing off the religion as something people follow because they keep hearing this as truth. Same goes for the Kali-worshiping cult too, turning that statement grossly judgmental, and presenting India’s society, as a whole, cutthroat. Plus, envisioned as desperately impoverished, if unwilling to lay blame on the British in total.

The alarmist nature preys on naivety, depicting foreign cultures as uncivilized. Yes, the East Asia Trading Company looks dishonest and oblivious; there is acknowledgment of that reality. How quickly they shut down Rolfe for caring, or second guess helping people instead of finding their merchandise shows an amoral attitude. Few involved care about anything other than profitability. The ones who do are quickly ushered out.

Stranglers of Bombay stages effective scenes. In the jungle, night and overgrowth create uncertainty knowing killers crouch in waiting. Crude they may be, the cult’s aggression represents any fervent, violent belief system, made especially vicious when a converted man murders his own brother, or another gleefully hangs himself to quickly meet Kali.

Rooting for anyone in this ugliness leaves Stranglers of Bombay confused, doubly so when the “hero” shows blatant ignorance. It’s up to a mongoose to save this story, but even that is sadly staged as live animals killing each other for entertainment. Not even a pounding, fantastic score can overcome that reality. A little more openness toward truth and less shrewd exploitation was needed, but the brash splatter sold more tickets undoubtedly. 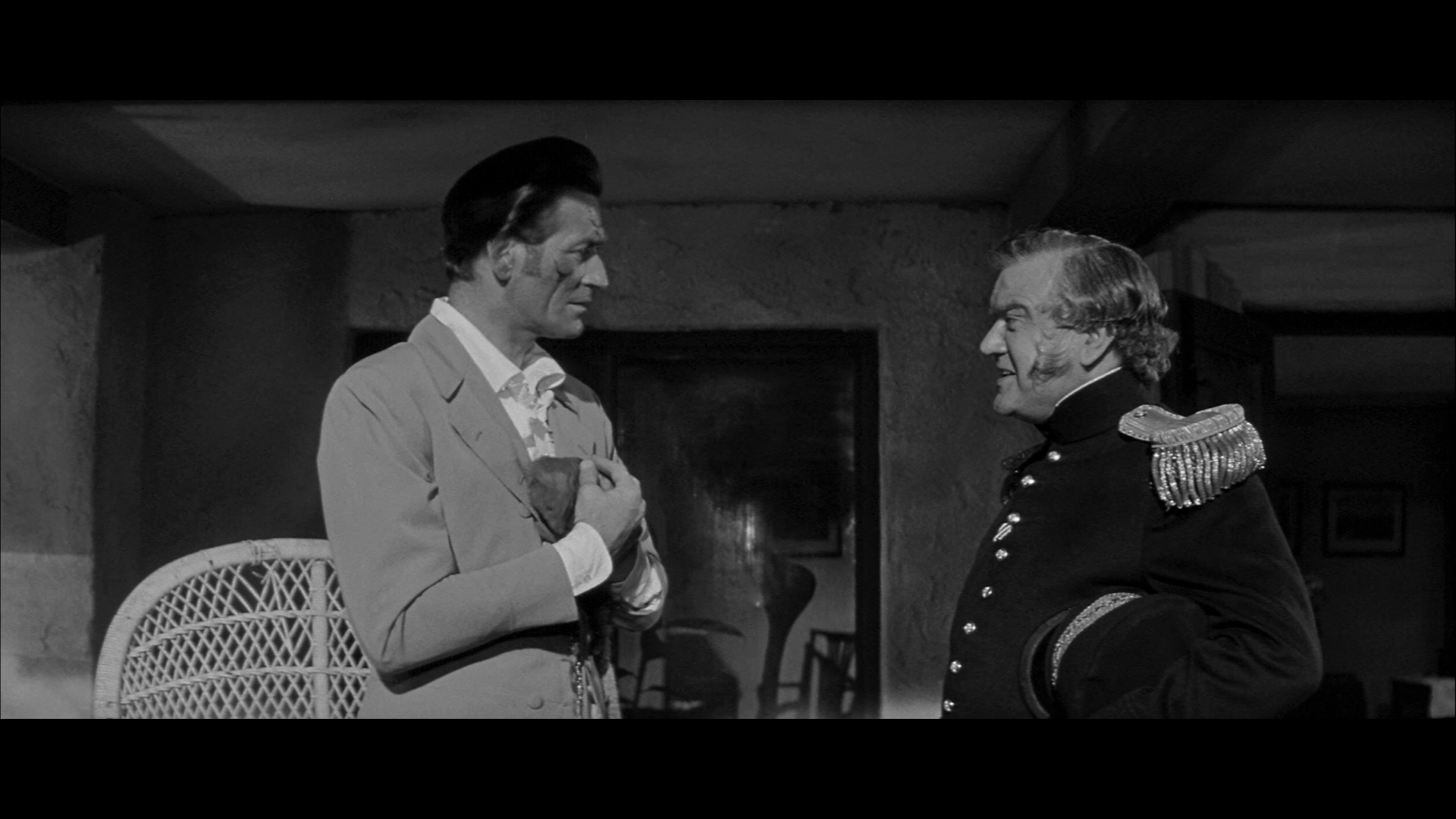 Sporting a thin – questionably thin – grain structure, Mill Creek’s HD release wavers a little. Not much, but enough to push it out of the top tier. By way of compression and slight filtering, the high-frequency detail is KO’d. What persists it still attractive, including uniform textures and costumes. India’s flair reveals rich diamonds and glittering headresses. That shines in this transfer.

Slight loss in the gray scale, notably in mid-tones, flattens things further. Stranglers of Bombay works well in the extremes however, bright in contrast, deep in blacks. Nuance in the dark British uniforms doesn’t fall to crush, keeping the detail evident.

At the source, Stranglers of Bombay barely struggles. The print’s few scratches and dust spots show infrequently, long enough between instances as to forget any problems exist at all.

A great score makes it through the decades fairly well, but the mono can’t resolve any range. Drums and horns muddle together as one over the opening credits. Music stings don’t perform much better, suffering at peak treble.

Considering the age, it’s fine. Even the dialog, coarse as it is, doesn’t collapse completely. DTS-HD does what it can.

The Stranglers of Bombay

Stuck between an ugly history and thrills, Stranglers of Bombay can’t find its way to develop any heroes – aside from a mongoose.

The 15 unaltered images below represent the Blu-ray. For an additional 27 Stranglers of Bombay screenshots, early access to all screens (plus the 120,000+ already in our library), 120 exclusive 4K UHD reviews, and more, subscribe on Patreon.