Joe Dante’s Gremlins took a swipe at Christmas commercialism. Remaking that movie – now with toys instead of monsters – Dante’s work criticizes militarism that drip feeds into kids from a young age. Where three years prior Toy Story celebrated an innocent, nostalgic childhood, Small Soldiers takes a more adult perspective as to what playing with plastic grenades and guns does.

It’s a movie trapped between that intent and the studio’s desire to profit though. A wry tone, fed groan-inducing, punny one-liners, does more to sell action figures than make a statement. Burger King partnered with Dreamworks on this one. Then came videogames and a full toy line. Denis Leary’s final line as the capitalist CEO, looking over the destruction his products caused is, “This would have made a hell of a commercial.” More than on-the-nose, it’s up-the-nose and through-the-brain because that’s what Small Soldiers was – an amped up sales pitch.

In retrospect, Small Soldiers’ seems right on the fringe of making its point, going so far as to mimic Paul Verhoeven satires in the intro. A company ad proclaims their products as, “Battlefield tech for the whole family.” Then later, an oblivious Phil Hartman suggests that maybe World War II was his favorite war, as if everyone shares a list of their top 10 global conflicts.

This mixes with processed, major studio antics focused on a small kid, who just like in Gremlins, finds a buddy in a gift only to fight against that thing’s nemesis. Small Soldiers’ criticism isn’t that every kid needs one to keep up, but rather these toys exists at all… while going out of its way to make them kooky and fun to a specific, impressionable demographic.

So Small Soldiers is a whiff, if an entertaining one. Passe teen romance and parental troubles aside, Small Soldiers maintains its enthusiasm and energy. Where the overall creativity falters in recycled concepts, the mix of puppets and CG holds up better than anticipated; at times, it’s difficult to even separate the two.

Any conversation centered on Small Soldiers in this web space requires acknowledging Phil Hartman’s role as a tech-obsessed, home theater fanatic who rants about image clarity and flesh tone accuracy. Yes, he’s the jerk neighbor. When things get loud, others on the block just look at each other and know who’s to blame. Worth noting his subwoofer is far too small to reach that far though. Someone didn’t study up. 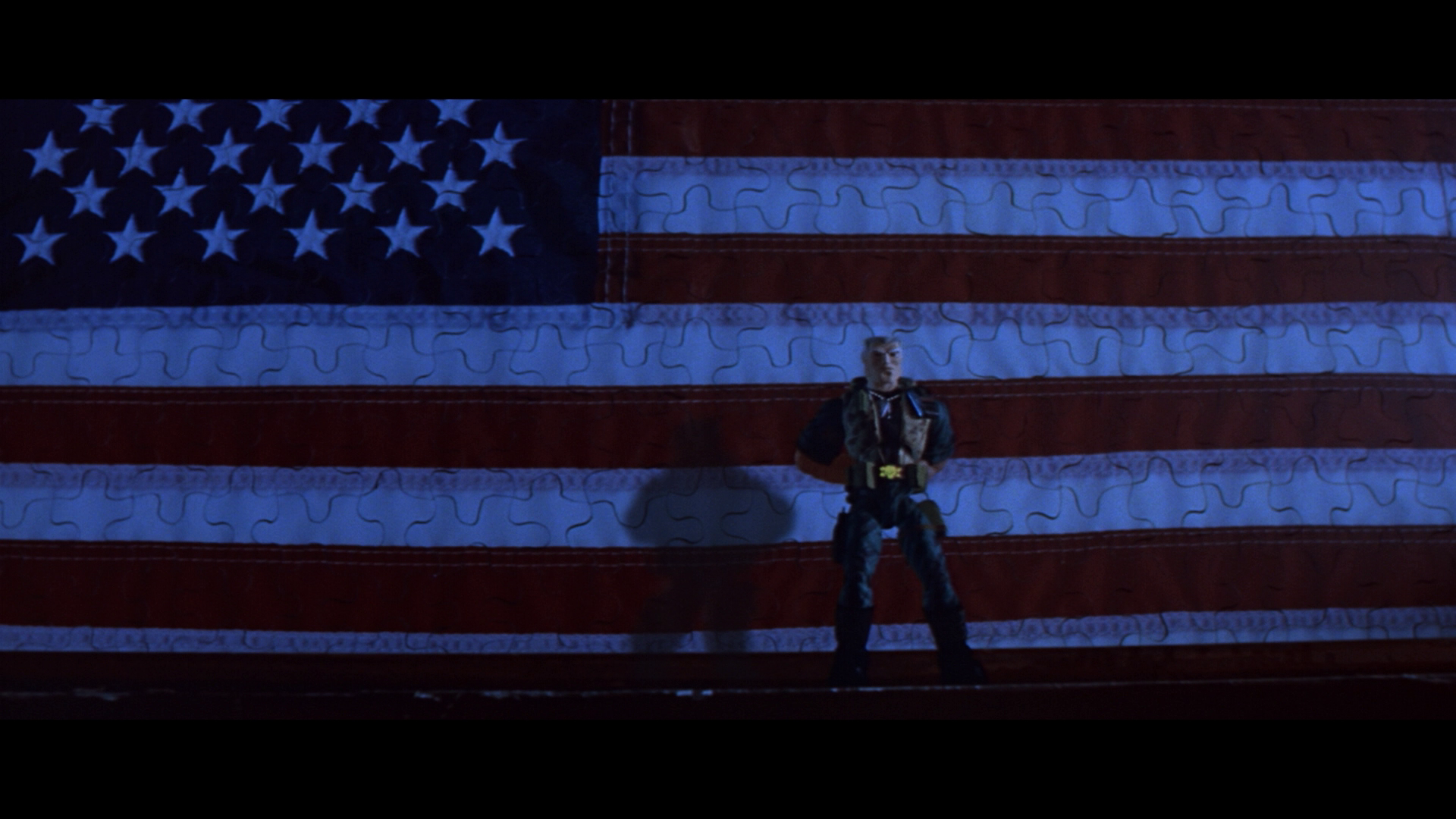 Grain is kept, if not well. A slight smear is noticeable when in motion, even though it’s subtle. Whatever causes the issue doesn’t introduce further complications. Small Soldiers looks like film at least, helped by crisp encoding that maintains the grain’s natural quality.

One benefit in avoiding modern mastering is color. While not hyper-saturated or glowing, the organic color appears untouched. Great flesh tones and satisfying primaries combine for an appealing image. Minor clipping in the contrast doesn’t offend. Neither do the black levels, passable in their depth. Dimensionality isn’t lost even as the shadows weaken a touch.

Directionality supreme in this DTS-HD track, using the soundstage constantly. Accuracy picks up small touches like dogs barking in the rears/stereos, and heftier action like rockets traveling from front to the rears. It’s so filling, Small Soldiers sounds wider in scope than just 5.1. Impressive.

Bass isn’t as notable, even dull. Explosions produce a mild jolt, fairly listless. Even the soundtrack/score fails to generate a low-end response. The best of the lot is a flamethrower, which on each shot, adds some weight compared to the rest.

Dated carry overs from the DVD include a blooper reel and making-of EPK.

Joe Dante repeats himself in Small Soldiers with mixed results, a movie struggling against the selling of military toys and simultaneously promoting them.

The 15 unaltered images below represent the Blu-ray. For an additional 27 Small Soldiers screenshots, early access to all screens (plus the 120,000+ already in our library), 120 exclusive 4K UHD reviews, and more, subscribe on Patreon.