Man in the Mirror

Man is useless. That’s the one constant in Prince of Darkness, an interesting philosophical anomaly for such a mainstream studio film. Science and religion meet in order to explain evil, bartering to make the rules, as if there were any such controls.

Part of it is arrogance – in Prince of Darkness, the church lied to elevate humanity’s importance, to give purpose to people. Then science brought mathematical grounding through physics and theorizing. In time, the two created separate factions to explain the same thing, but in this movie’s world, both were utter failures. Human ego can’t allow something to exist that cannot be understood… at least until it does.

The dated turn-of-the-millennium fears aside, Price of Darkness turns mirrors against the cast

The first to be affected aren’t the scientists or priests. It’s the homeless, struck by a metaphysical poison. Scientists consider mental disorders; the church just ignores them all together. There’s an inherent villainy there, where these elite intellectuals and philosophers ignore the suffering. What matters to them is answers, not empathy. Prince of Darkness makes sense of why Satan chose this time and place to emerge. He only needed people willing to discard their own.

On this engaging, creative base, John Carpenter writes/directs what becomes a minimal body snatchers and/or zombie movie. It’s deflating, even crude when up against the originality stretching through the first half. Shambling undead wander church hallways, vomiting into victims, and keeping their kind alive.

Keeping this small scale works. These few people determine civilization’s future, and as a unit, they can’t find agreement. Tribalism potentially ends us all, because the smartest failed to accept forces greater than our understanding. To think what becomes of this is a crummy fight, a few gory kills, and anti-climactic end is difficult to accept.

Prince of Darkness lingers in the mind, much like the supernatural forces in this movie. The dated turn-of-the-millennium fears aside, Price of Darkness turns mirrors against the cast. They see themselves, changed, hurt, scarred, or worse. Some merely stare, curious as to why this happened to them. It’s a matter of accepting that yes, they were wrong; the mirror shows as much. What reflects isn’t them at their best, but their lowest once evil consumes their bodies. Again, Carpenter hits on a sensational, thoughtful metaphor, but sadly succumbs to habit and cliché. 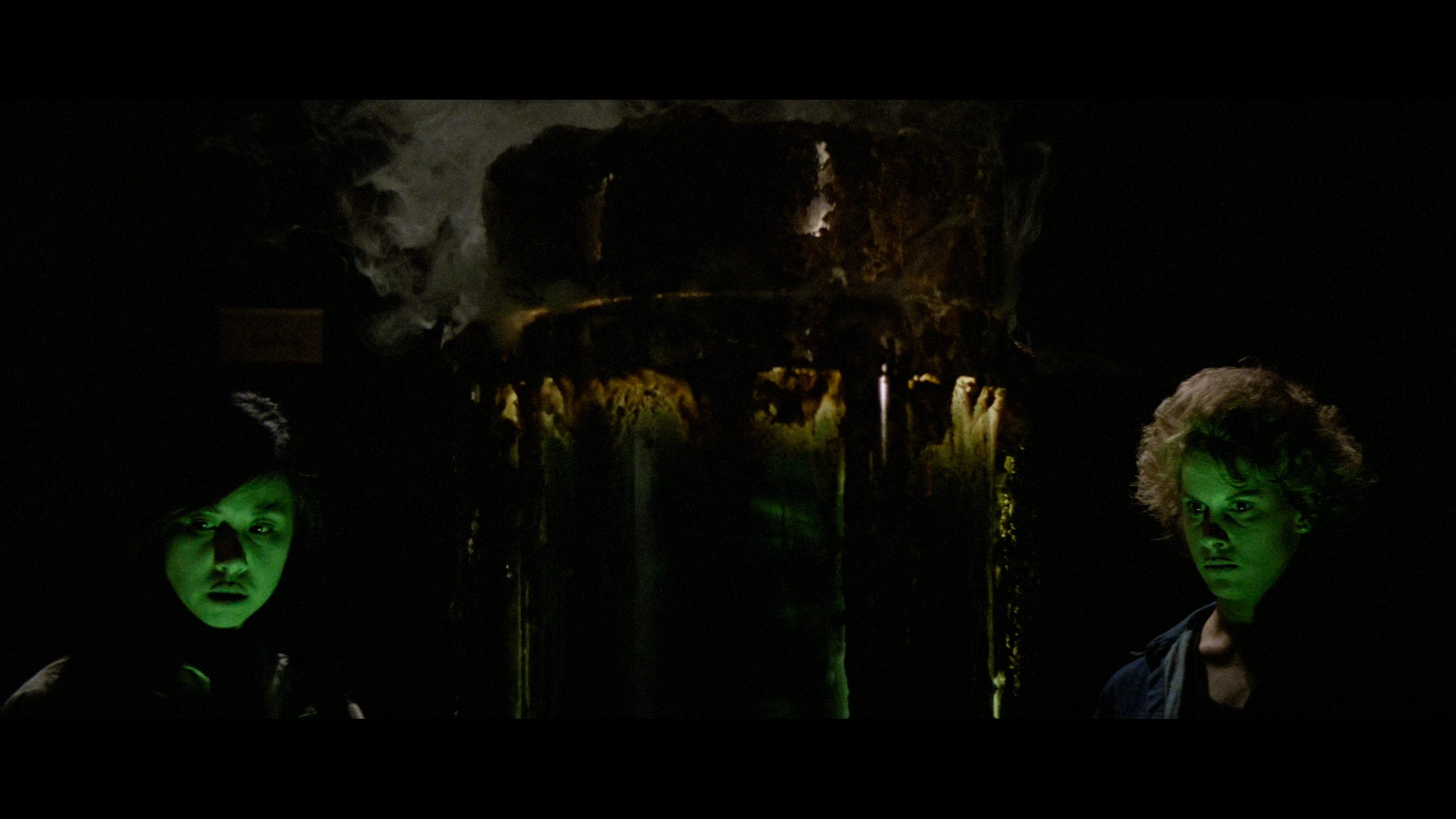 Like Prince of Darkness’ release date companion They Live, Scream/Shout issues another stellar 4K transfer. Encoding takes care of the grain structure, managed without coompression concerns. Intentional overexposures at the source don’t cause issues either.

Boosted by Dolby Vision, overall contrast displays proper range. Deep (or just deep enough) shadows do their thing, contrast natural and vibrant. Highlights make an unarguable difference. Candle flames or the search light carried into the dungeon during the first scene push the peak. Flashlights too.

Likewise, stable color pushes digital warmth, nothing excessive, if enough to drown some primaries. Inside the “tube,” green swirls make their mark against a dingy underground space. Flesh tones veer toward orange, annoying but not a total killer.

Stereo and 5.1 options, both in DTS-HD, but the new Atmos mix wins out. Powered by a persistent, throbbing score, range is apparent before any action. There’s excellent weight in the low-end from the drums alone. Stereos play a key role in separating the music, plus a proper bleed into the rears.

Horror kicks in as bugs chitter around the soundstage, successfully filling the available channels. Small scale action doesn’t offer opportunity to utilize the heights, or even the surrounds. Directionality is unexciting, but so is the design itself.

Afterward, an alternate opening made for TV, then a tour of filming locations that comes up just shy of 14-minutes. Trailers and other promos finish – except for the small easter egg. Click the cross on the second bonus screen to view an interview taken during the 25th anniversary Prince of Darkness screening.

Smart and stimulating, Prince of Darkness begins with a striking concept, but falls apart as it descends into horror tropes.