They Ain’t From Cleveland

In recent years, white supremacists co-opted They Live, twisting the theme to suit their grotesque anti-Jewish beliefs. If Carpenter’s film fails, it’s in making that distorted view possible. Carpenter adamantly sought to tear down Ronald Reagan’s veil of economic prosperity, yet makes sure to show the immigrants working4 American jobs. And it’s eerie how wild conspiracy series molded to They Live. The idea of television programming everyone, that lizard people live among us, and that sense of an all-powerful Illuminati-esque force fit too well into the internet’s loonier side.

But They Live isn’t that. At all. They Live fumbles in the delivery, but relentlessly slams society’s blindness. Star Roddy Piper wanders into Los Angeles homeless, seeking shelter in a camp, which is soon destroyed by an overzealous police state. These people work in construction. Yet they live in squalor, but no one seems interested in why.

They Live doesn’t develop Piper as a character. After putting on truth-seeing glasses, unveiling subliminal messaging plastered on billboards and freakish alien people among him, it’s instant; he’ll shoot to kill. Co-star Keith David is more measured. He takes convincing. Not to believe, but to see. They Live stages a hilariously overlong fight between the two, leading to David’s awakening, because David refuses to don the glasses. It’s that resistance to truth, that refusal to even think the system works against a middle class existence, which finds David the needed depth in addition to They Live as a whole.

“I don’t bother nobody, and nobody bothers me,” says David. That’s the defeatist attitude, but look at They Live: It’s an utter mess. The first shot is of a graffiti-laced wall. Into LA, skyscrapers lift the rich above what’s below, a dirty, torn, ramshackle populace unable to live in decent housing, this after eight hours spent chopping and pouring concrete.

Until the final act, They Live never shows the rich. That’s likely the failing because this only feeds into an idea of media bias. Two blue collar, working class guys breaking into a newsroom, guns firing, isn’t the same visual intent in this era of 24-hour cable broadcasts. Given the current state of things, it’s outright uncomfortable, but Piper and David fight against the system in total. Money is a god, spending is great, but only if one is willing to give up their pride. Carpenter isn’t subtle and quotable lines add necessary levity. It’s a joy to watch, even knowing how lost the theme became. 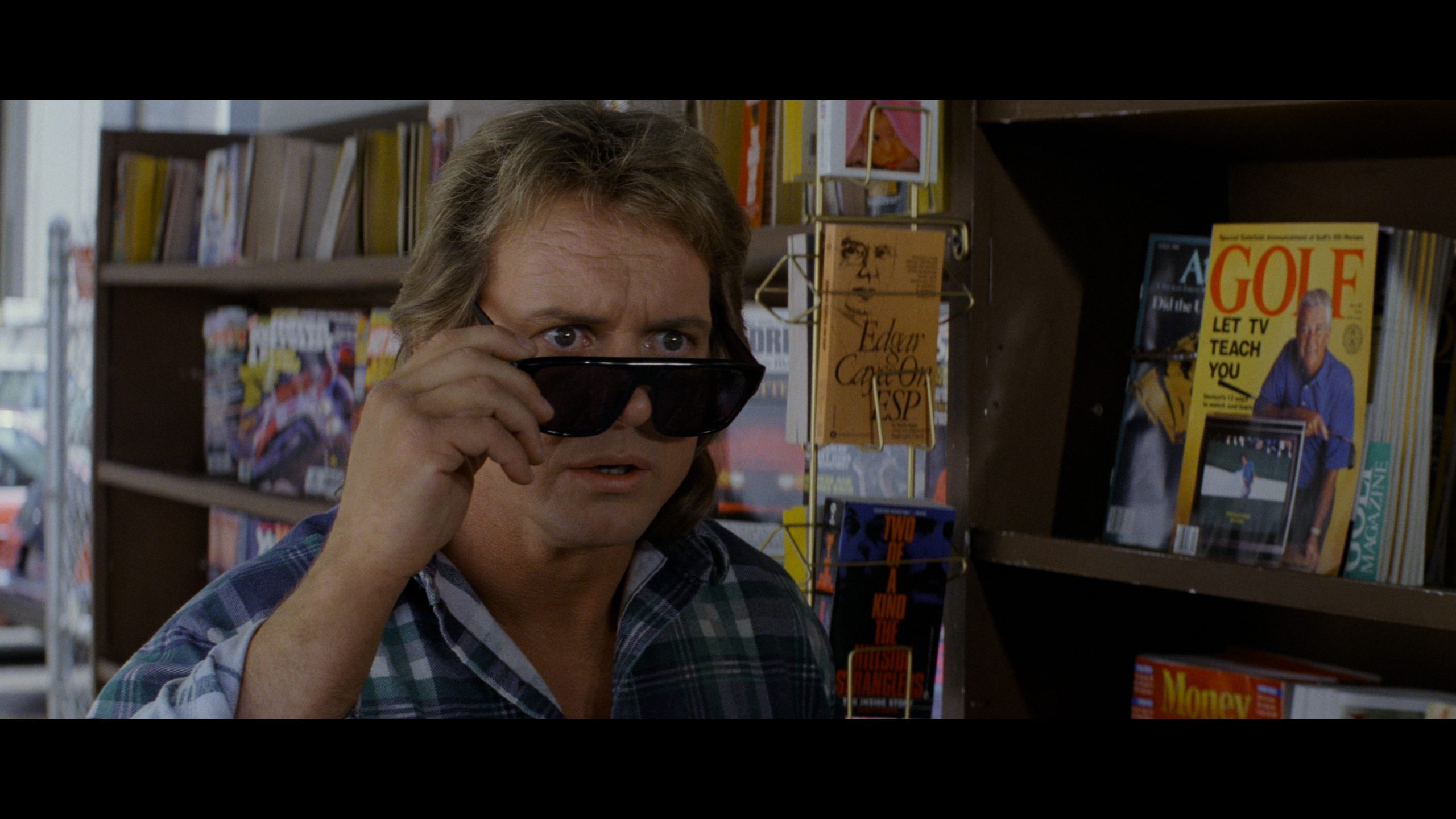 Previously released in 4K via the UK, Scream/Shout almost certainly use the same master. That’s a positive. They Live’s film stock is represented flawlessly in this digital format. Grain reproduction leaves everything totally transparent to the source. This absolutely looks like film, and restoration handles any nagging dirt/scratches; it’s pristine.

Packed with detail galore, facial definition and textural precision resolves immaculate fidelity. City skylines capture Los Angeles as it was, no brick left unseen. Wide shots look equal to anything up close. The jump in sharpness alone over previous editions makes this worthwhile.

Avoiding crush through the overexposed cinematography, black levels do wander, if proving themselves capable in reaching true black. Highlights prefer remaining neutral, not accentuated. There’s more than enough depth through the contrast, so a lack of intensely bright searchlights (or other such elements) isn’t costly.

Offering DTS-HD 5.1 and stereo, the highlight is a new Dolby Atmos track. They Live isn’t an aural masterwork, although the heights won’t go unnoticed. During the the first act-ending raid, a helicopter swings between overhead channels in a fluid motion. The scene’s chaos stretches the soundstage too. Destruction sends crashing debris outward (and screams too). Ambiance fills the city, general noise and car horns bounced to the stereos or rears.

Like with the video, overall clarity makes They Live sound practically new. Flawless dialog doesn’t represent a film well past 30-years-old. Neither does the score, full in its range, complete with rumbling, satisfying low-end. If there’s any signs of aging, it’s in the action. Sound effects lack the sharpness from modern designs, but that’s merely reality for a mix rarely sounding of this world.

On the UHD, John Carpenter and Roddy Piper’s commentary, plus trailers. The included Blu-ray hosts the rest, mirroring Shout’s previous release, the first being a 10-minute interview with Carpenter, that followed for five minutes with Meg Foster. Then, Keith David for 11-minutes. For another 11-minutes, stunts and sounds are explored via the crew. An EPK, extended footage from the in-movie commercials, TV spots, and a stills gallery bring closure.

Breaking down myths of Reagan-era policies, They Live isn’t always so clear, but it’s a smart, calculated smear of a world burdened by inequality.