Blind Fury is barely R rated. A few precise sword slices remove hands, and a couple expletives fly, mostly for comedy. That’s a mistake given the kooky tone, better fit for a PG-13 action flick meant to share with kids/teens – plus, there’s a kid side character, mourning the loss of his mother. Trying to be adult about a Zatoichi knock-off starring Rutger Hauer whiffs on the target audience.

That aside, Blind Fury excels at fun. Hauer plays a Vietnam veteran, blinded in combat, but trained in Taiwanese swordsmanship; Blind Fury runs with it, merging into redneck horror, the ‘80s designer drug trade, and Las Vegas corruption. There’s plenty happening in this movie, but Hauer’s wonderfully kitschy performance manages to squeeze through the stuffed plotting.

While Zatoichi celebrated samurai culture, even deeply personal to Japanese lore, Blind Fury instead treats this premise as camp. Unlike Rambo, the series evolving into a post-Vietnam victory parade, Blind Fury uses the war only as a setup. Hauer only defends against villains who directly involve him as he tracks down an old war buddy. Although using the Vegas strip for its lights, Hauer tussles with comically caricatured tycoons, the cliché cigar-chomping, cowboy hat-wearing Texans who in any other movie protect their oil instead of drugs.

There is an emotional core. The catalyst is a mother gunned down, and her son carried off by a heroic blind man. Blind Fury isn’t without loss, although consequences are few. Mostly it’s Hauer convincingly swinging a blade at deviously smiling goons, most oversized pro wrestlers or football stars in reality – anything to exaggerate the odds against the sightless hero.

Never low on energy, pacing keeps interest high and a thin runtime doesn’t allow any extraneous scenes. Blind Fury jumps from action set piece to action set piece, enamored with the decade’s aesthetic. For the finale, it’s Hauer against Sho Kosugi, bringing a slight Asian flair into the decidedly western mix. Offensively slim and forced? Sure. Kosugi isn’t even in the story until he darts into the brawl. Yet for a movie adapting (even mixing) into Japanese cinema, Blind Fury makes it work in the dorkiest way possible. It fits because Blind Fury is so open about its own absurdities. Good thing Hauer is in on the joke too. 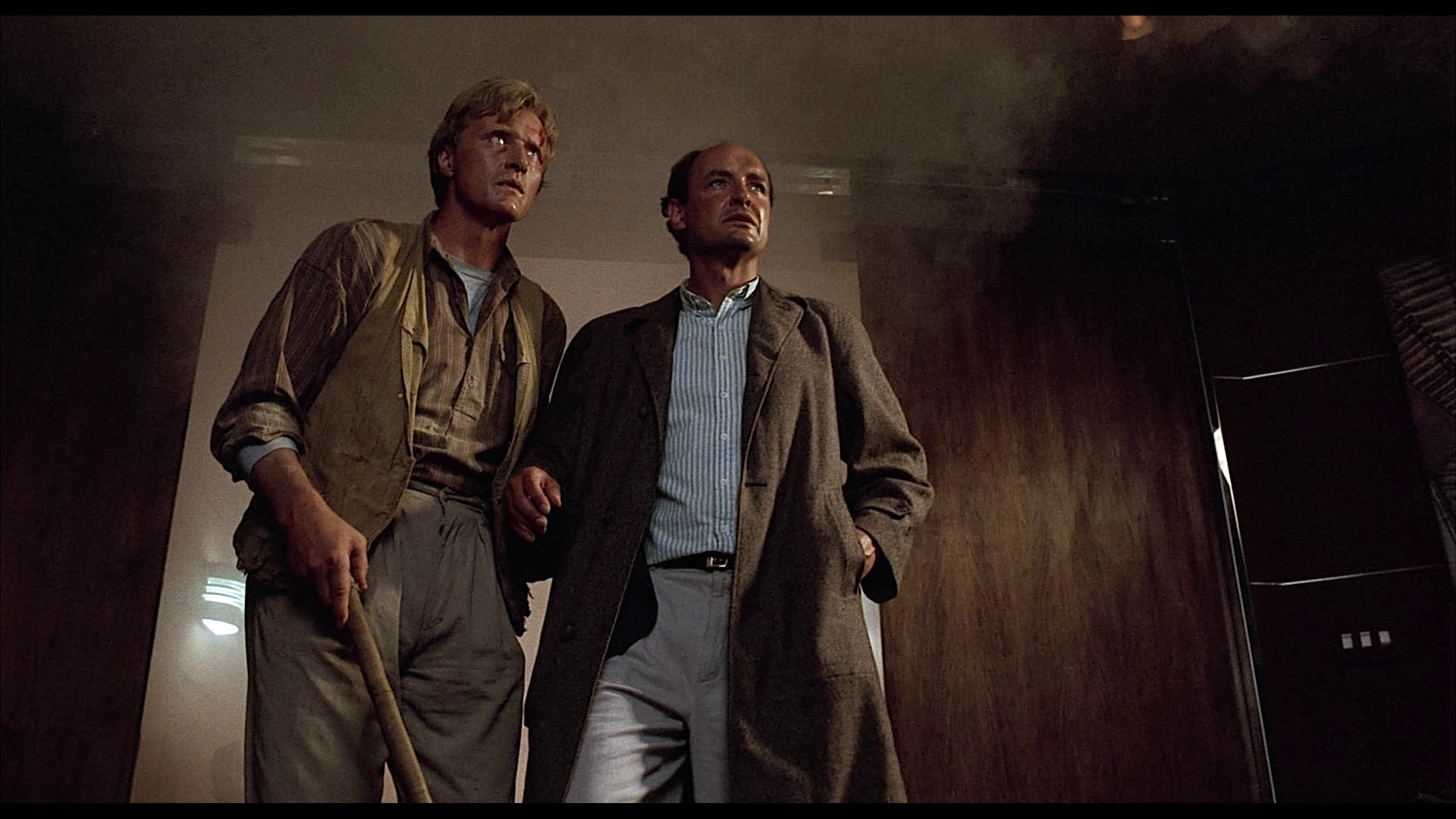 There’s give and take to Mill Creek’s transfer. It toys with viewers, one moment impressive, the next dire. One certainty is the old, creaky mastering. Blind Fury comes from a messy source. Sour resolution mars medium/long shots, but leaving close-ups excellently defined. Detail is frequent, but limited by the cruddy compression routine. Artifacts pop up constantly, then worse when grain spikes. Some notable edge enhancement doesn’t help. Expect more than a few halos.

Highly saturated color brings out strong primaries. Flesh tones veer toward excess, inoffensively so however. Overall the palette is pleasing and pure, if elevated. Whenever this master was struck, saturation boost factored into the process.

Minor crush inhibits shadows, marring otherwise excellent depth. Between contrast and black levels, Blind Fury appears almost new in this regard. Superb brightness makes up for other problems, offseting other concerns a bit. Wildly imperfect and messy as it is, Blind Fury at least warrants an upgrade over SD offerings.

Fairly wide stereo effects make use of the fronts, placing sword swipes and gunshots into separate speakers. Released in 1989, it’s clear Blind Fury comes from the period where Dolby Stereo was perfected, right on the precipice of 5.1. Mixing makes sure to place effects wherever possible.

Dull dialog aside (not out of line with anything else from the time), fidelity remains strong. Soundtrack highs happen cleanly, and the low-end works better than expected. While not a wall shaker, gunshots still hit the subwoofer and drums thicken when drama is needed.

Nothing other than a fancy faux-VHS slipcover.

Campy and fine with it, Blind Fury’s American spin on the Zatoichi series isn’t deep, but content in playing with action movie tropes.

The 15 unaltered images below represent the Blu-ray. For an additional 25 Blind Fury screenshots, early access to all screens (plus the 120,000+ already in our library), 120 exclusive 4K UHD reviews, and more, subscribe on Patreon.