More a Minor Annoyance of the Beast

While understandably derided for its lean, unconvincing special effects (from Bert I. “Spared Every Expense” Gordon), it’s easy to miss War of the Colossal Beast’s distinct qualities. At times, the script employs humor, like shuffling between bloated government agencies, trying to figure out which department needs to lead in bringing a 60-foot mutant man Stateside. Quick cuts and indifferent answers quickly skewer bureaucratic inefficiency.

The beast is former soldier Mike Manning (Dean Parkin), now disfigured after the events in The Amazing Colossal Man. Typical ‘50s sci-fi is an all-out military blitz; War of the Colossal Beast isn’t. Instead, there’s genuine effort to save this man, lost in his own mind or not, because this isn’t a giant ant or spider, but a person, stuck in his skin due to a US nuclear test. While the story doesn’t stick to that angle, it’s on the underside of an unusually dour, sympathetic giant monster movie.

Writer George Worthing Yates penned a number of classics. Them, Earth vs the Flying Saucers, and It Came from the Beneath the Sea, all successes, hugged the decade’s sci-fi formula. In War of the Colossal Beast, those key elements remain. Notably, the scientists and military men, but eschewing romance. And rather than arguing about whether Manning represents a valuable discovery, everyone agrees to keep him alive, even after an escape into downtown Los Angeles.

No, War of the Colossal Beast isn’t a thriller. There’s hardly any fear or chilling imagery. Considering a few minutes of flashback footage, the total runtime struggles to reach an hour. The “war” isn’t much of one either. Yet in that time, Sally Fraser develops empathy as Manning’s sister. She hopes for a cure, but also quietly accepts the likely inevitability. Rarely (if ever) do women in these roles serve such a crucial story role; Fraser’s performance makes this work.

Recycled from Gordon’s The Cyclops, the make-up slapped onto Parkin’s head works here. Missing an eye, what’s left is a blank, all-black socket, half of his face unaffected. In many scenes, he turns away from the camera, leaving only his good side exposed. It’s as if he’s just a person – a big one, but a person. That humanity, a great counter to Manning’s own internal conflict in Amazing Colossal Man, makes the pair Gordon’s best work. 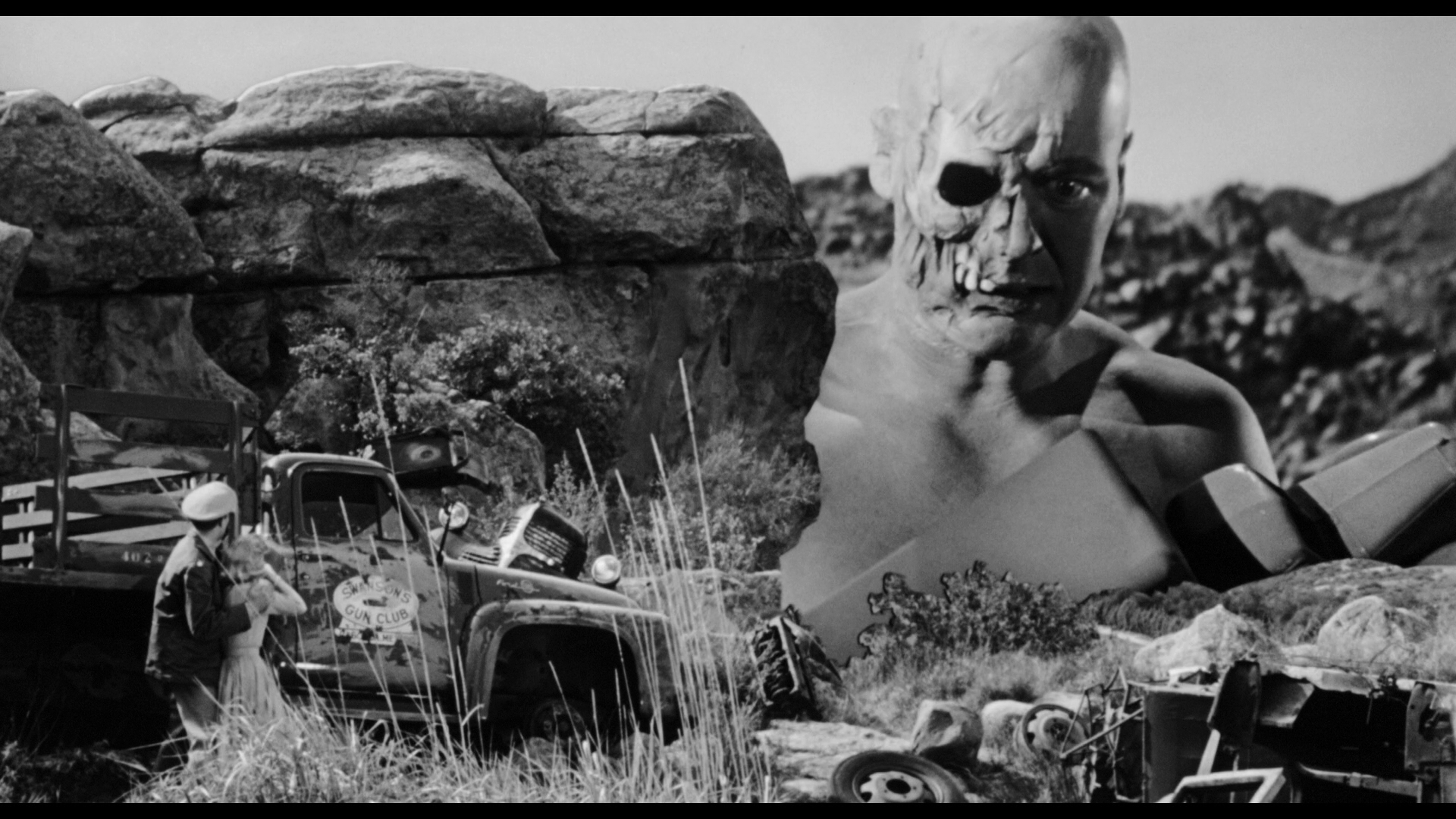 Beautiful stuff from Shout/Scream Factory. Their remastering doesn’t remove all damage, but leaves only minimal dirt/scratches behind, enough to give the vintage aesthetic life. Thin grain resolves, preserving the imagery as film, not a digital transfer. There’s no sign this is compressed. There is a slight vertical rolling on occasion, subtle, if annoying. A scene around 23-minutes with Joyce marks the worst of it.

Gray scale pushes extremes. It’s hefty, but controlled. The police Sargent’s black uniform is right on the cusp of crush. However, it doesn’t drop too far. Likewise, contrast brightens, pure white. Mid-tones tend to fall off, if still clean in terms of gradients.

Sharpness and detail both excel, brilliant even considering the no budget source. The resolution draws out facial texture. Clothing likewise resolves at the same level. Other than stock footage and a few composites, War of the Colossal Beast consistently performs in HD, certainly at a level unseen before – likely not even during the original theatrical run.

Note the final few second happen in color, mundane except for Joyce’s clothes.

Decent DTS-HD mono offers clarity, albeit imperfect. Dialog escapes with some static in the background. There’s no popping/skipping though. The score’s range on both ends muddies a little, aged naturally. Thankfully, the track isn’t messy, just wobbly a touch, well within expectations for a mono mix of this type.

Oddly, the case doesn’t mention the commentary track, led by C. Courtney Joyner, Donald F. Glut, and Eric Hoffman. Mostly, they discuss their own monster nostalgia and time writing for Famous Monsters. Marketing only notes the new Bert I. Gordon AIP retrospective, which includes numerous interviews, including Gordon himself. This runs 16-minutes. The ending is offered in black & white too as an another extra.

Note Amazing Colossal Man has yet to see a Blu-ray release.

War of the Colossal Beast

Better than its reputation, War of the Colossal Beast finds an interesting, engaging story angle to separate itself from others of this type.

The 15 unaltered images below represent the Blu-ray. For an additional 25 War of the Colossal Beast screenshots, early access to all screens (plus the 120,000+ already in our library), 120 exclusive 4K UHD reviews, and more, subscribe on Patreon.