Tourist Trap’s early tell is how nicely Mr. Slausen (Chuck Connors) treats stranded teens. The older man – always carrying a shotgun, wearing overalls, and living alone in absolutely nowhere – offers too much help. The teens stepping onto his property and committing horror movie no-nos (being too trustworthy, getting separated) make it too easy for Slausen.

While Friday the 13th and its ilk were granted eternal sequels, Tourist Trap didn’t. That’s a shame. Slausen is a creative killer, using telekinesis to animate mannequins or shoot knives into victims. Unofficially, Carrie battled Jason Vorhees, but Carrie versus Slausen? That’s a definite war, which sadly never was.

The surface material doesn’t seem particularly memorable. The secluded locale, women in limited clothing, and gore. Tourist Trap finds success in its execution, including a clever, scintillating opening sequence, and frequent dark basements where plaster people hug the walls. More than typical suburbs or campgrounds, the out-of-time locale serves the horror. For Slausen, time stopped when modern society moved away; a freeway expansion made sure. He says so. A lot.

Slausen isn’t mindless. Deranged, mad, even bipolar given his fluctuating personality, but purposeful. Slasher movies often rely on preserving conservative life, hence the need for the antagonists to pick off sexually-charged teens. The same is true for Tourist Trap, Slausen part of that old guard who can’t accept changing morals. Hence his past misdeeds, held for reveal until the final act, ingraining the character with demented purpose.

Cheap and plodding as Tourist Trap feels (too often so), by the climax, the creative spark shows. Fresh from film school at the time, writer/director David Schmoeller twists (literally, in a sense) the hero role, pulling off the successful bait and switch. Seeing teens/not really teens wandering around a forest at night doesn’t offer any lasting memory. Yet the finish, where things again feel typical at first, breaks down norms, even against modern standards. 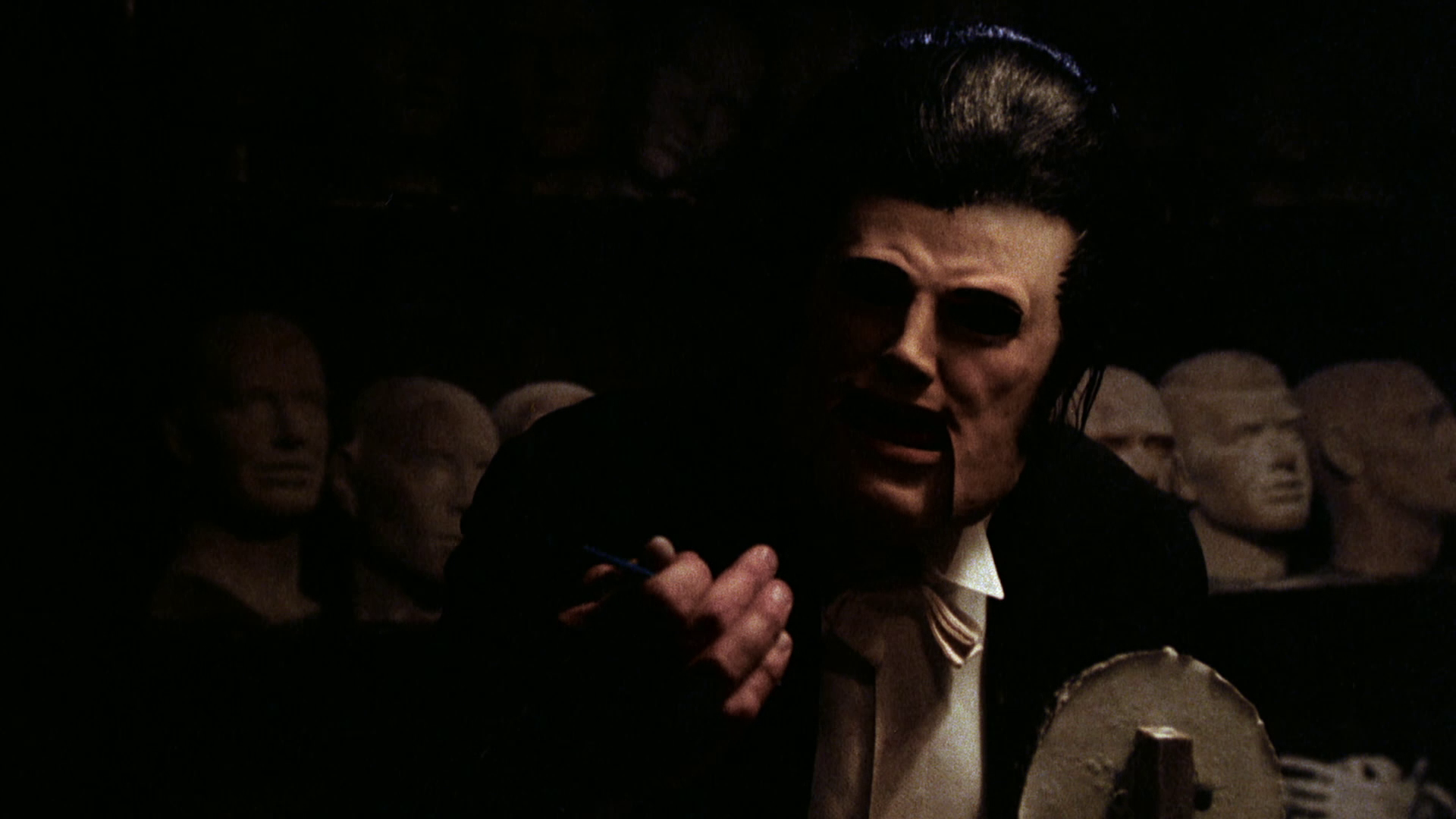 Behind a clumsy encode, Tourist Trap shows signs of strong mastering. There’s enough resolution to find detail, nothing grandiose, if handling forests and messy interiors with care. A few shots appear drawn from SD sources (showing tape-like artifacts and smudgy definition, likely footage originally cut from certain prints), but the rest excels at consistency. It’s a well preserved print too. Damage stays at a minimum until the final reel deals with numerous dust specks. Even then, it’s a mild irritant at worst.

Elevated color gives the imagery pop, bringing out flesh tones and other primaries. The reds especially embrace vibrancy. That’s helped by impressive contrast, teetering on clipping, but avoiding any issues. Critically, black levels do fine work. While not always pushing pure black, shadows bring enough density to keep a hold on the horror. Crush is natural to give the dark scenery deepened corners for the killer to hide. Source film exposure allows grain into certain areas, not usually a concern – except for the compression.

While given enough disc space for a movie this length, grain turns into artifacts for most of the runtime. At best, it’s sloppy, reducing visible detail. The more complex the shot, the worse things become, as is the norm. Tourist Trap is typically crowded with background objects, whether nature or the scuzzy interiors. Messy stuff, lessening a nice master.

Dolby Digital 5.1 or mono, although differences between them are minimal. Either way, the audio sits centered. Expect no positional touches.

Even though it’s a compressed track, Tourist Trap still sounds superb. Crisp fidelity works the high treble cues in the score, no distortion noted. Violins hit a hefty high too. The 5.1 option adds slight bass, giving the killer strength by at least touching the low-end as he kills, especially as a victim is thrown into a wall.

Packaged inside a jumbo faux-VHS box, Full Moon includes a small action figure of Mr. Slausen, maybe the only plastic Chuck Connors memorabilia in existence. On the disc itself, a commentary from writer/director David Schmoeller. A well produced making of runs 24-minutes. A trailer and image gallery finish this off.

The 15 unaltered images below represent the Blu-ray. For an additional 25 Tourist Trap screenshots, early access to all screens (plus the 120,000+ already in our library), 120 exclusive 4K UHD reviews, and more, subscribe on Patreon.