The apple doesn’t fall far from the directorial tree in Brandon Cronenberg’s case. The son of legendary horror auteur David Cronenberg, the young filmmaker explores unnerving identity issues and “mind” horror in his dark sci-fi thriller Possessor. The meticulous production could slide right into his father’s catalog with its unique world-building and creepy implications. That’s a high compliment for a director with only two films on his resume.

Possessor’s cast includes Andrea Riseborough, Jennifer Jason Leigh, Christopher Abbott, Tuppence Middleton, and the always reliable Sean Bean. Riseborough and Abbott are the featured players in Cronenberg’s disturbing screenplay, which embraces graphic violence and sexuality for much of its thrills. The uncompromising story is intense and occasionally uncomfortable.

Tasya Vos (Riseborough) is an assassin-for-hire. Using secretive brain technology, she has the ability to take control of other people’s bodies. Losing herself in the process, it’s a rare skill with many risks involved for both parties. Her boss sends Vos to take over the mind of Colin Tate (Abbott) and assassinate his wealthy father-in-law. The important mission goes sideways when Colin fights back for control.

Finely crafted and engaging from the start, Possessor may be a little too pretentious with its eerie atmosphere. The crux of the movie lies in its gender and identity metaphors. Vos was already losing herself to repeated brain implants before the Tate assignment, affecting her home life. She’s recently estranged from her husband and already shows signs of losing memories. It only gets worse when Vos-as-Tate starts losing control of Tate’s body. Is it her or Tate calling the shots?

The slow burning screenplay eventually starts hitting, and hitting hard when it counts. The confusion about gender and identity revel in what I call mind horror, as opposed to the more traditional body horror tag. It’s the next evolution for a genre that has been thoroughly explored by David Cronenberg and others.

Possessor is shockingly violent with excellent practical gore effects. I suspect many film critics will think the graphic violence and sex are mostly unnecessary. The sci-fi thriller is a deeply cerebral movie once you get past those obvious marketing hooks. Brandon Cronenberg proves he’s a fine director in his own right with Possessor, though I can’t help but think he saw his father’s eXistenZ one too many times. The fully realized vision by Cronenberg is both horrifying and intriguing at the same time. 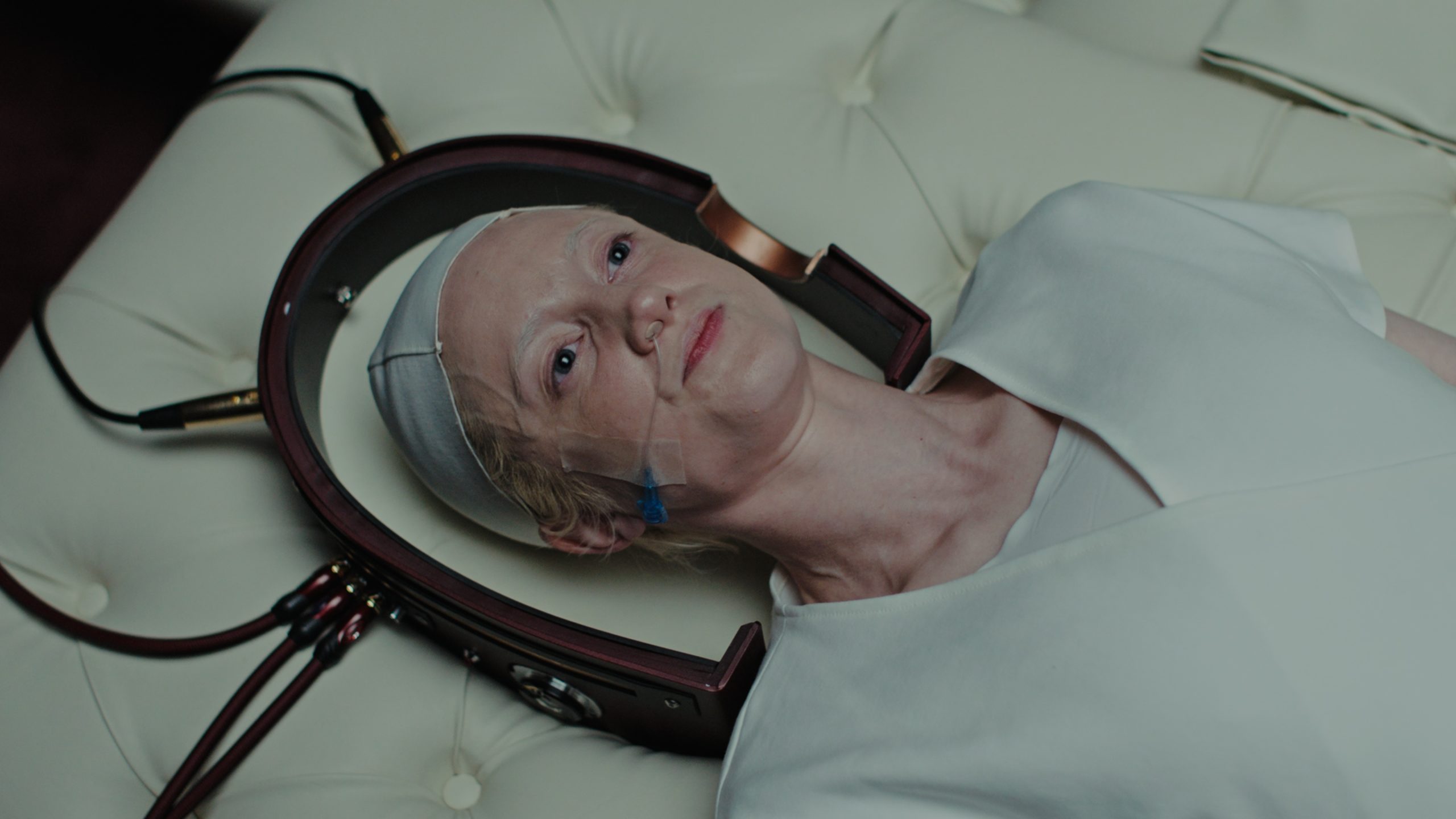 Years in development with cinematographer Karim Hussain, Possessor uses a variety of special lenses and camera tricks for its near-future setting. The terrifying sci-fi thriller isn’t necessarily concerned with absolute resolution and exacting definition for its video despite a reliance on practical effects instead of CGI. Extensive bokeh and focus tricks introduce softer scenes mixed with sharper imagery.

Technically filmed at approximately 2K resolution, Possessor: Uncut was finished at 4K. That carefully tweaked 4K digital intermediate has been used for this UHD. The 2160P presentation at 1.78:1 is stylized and highly refined, if not bursting with an extreme color gamut like other films. Possessor’s color grading is often matched to the character, switching from more desaturation for Tasya Vos to angrier shades of red and orange for Colin Tate. There are no contrast issues or unintended mistakes. Black levels are fairly inky with deep blacks and nice shadow delineation. The expanded HDR is used for more subtle gradients and highlights. The difference between the UHD and Blu-ray isn’t minor but doesn’t quite compare with the best UHDs.

The UHD and Blu-ray feature the original uncut version of Possessor, first seen at its Sundance run. Running 104 minutes, an edited version was made for theatrical distribution which is not included. The main feature is encoded in a decent HEVC job on a dual-layer UHD. Some minor compression issues arise if you pay close attention. Well Go USA has been hit or miss authoring UHDs but Possessor is a solid effort.

Possessor comes equipped with suitably well-rounded 5.1 DTS-HD MA audio. The haunting and eerie score sets an ominous electronic tone, replete with subtle reverb and other sonic tricks designed to unsettle listeners. There is a meaty low-end with palpable presence.

Violence is heard in resounding clarity. Dialogue is nicely balanced in the audio’s larger dynamics without getting lost in the soundstage. Providing atmosphere when necessary, the surround mix effectively engages immersion as people become possessed.

It’s easy imagining Possessor with a more complete object-based surround mix in some of the more critical scenes. Indie horror and sci-fi rarely get that kind of special treatment.

Well Go USA includes a Blu-ray with the 4K UHD. All special features are shifted over to the BD. It’s a fairly standard mix of supplements with trailers, a few deleted scenes, and three solid behind-the-scenes featurettes exploring different aspects of the production. The three featurettes dig into the movie’s special cinematography and practical effects with comments by Brandon Cronenberg and other members of the crew like Dan Martin.