There’s no rooting for Anita (Drew Barrymore) or Howard (James Le Gros) in Guncrazy, the deranged protagonists on a killing spree out west. Occasionally, America finds heroes in killers, battling against the system. In Guncrazy though, the problems exist because of themselves.

Sent to theaters in 1992, Guncrazy did find itself ahead on social issues, notably teen sex and bubbling counter culture. Anita acts out, stuck living in a trashy trailer with her stock, torn wife beater-wearing dad. She’s abused though, sexually. No wonder she rebels and finds company with a soon-to-be released prisoner.

Guncrazy did find itself ahead on social issues

Howard is interesting, at least for a time. He resists; he generally wants to make right. Where Guncrazy is so often built on American western mythos or prohibition-era outlaws, Howard’s reluctance to handle weapons at least opens Guncrazy with empathy. Together, Howard and Anita’s world defies them. A local preacher doesn’t provide sane sanctuary, high school boys mock Anita’s sexuality, and in a small role, Michael Ironside serves as an oppressive cop distrustful of everyone.

Guncrazy’s issues lie in how these characters can’t stop pulling the trigger. The first few seem almost – almost, keyword – reasonable. After that, there’s a white trash us-against-them quality, leading to near exploitation-tier bloodshed as the rampage continues.

Were they only villains, Guncrazy might stand as a statement against the urge to commit violence in a violent culture, but no, the script tries earnestly to humanize this pair. First Anita can’t bring herself to rob working class guys at a local diner, and then she finds solace in a stranded Great Dane. Howard, refuses to even hold a gun, turns away Anita’s advances, and is remorseful after an accidental discharge goes wrong.

The design is such that it’s a love story between two broken people, drawn together by their vicious defiance of norms. Yet, they never share the screen as a legitimate couple, their chemistry flailing and noting Anita’s only 16 (Barrymore was in her early 20s) while exploiting nudity feels especially gross. All leads to an eventual, predictable final showdown where Howard goes full camp, waving two guns like six shooters, mowing down faceless cops in a final act of romance. It’s absurd, and demolishes whatever point Guncrazy intended to make. 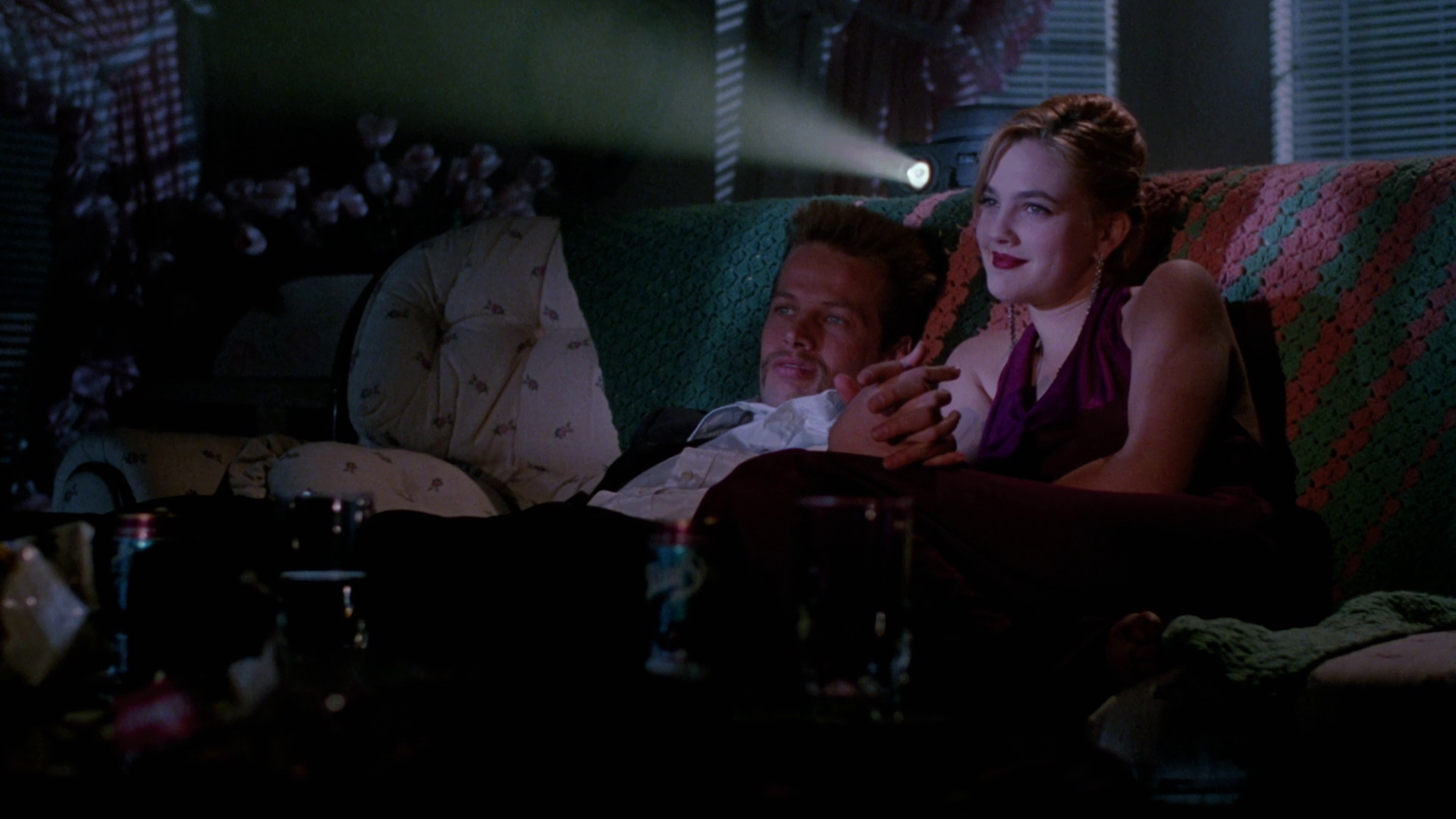 Guncrazy suffers from a multitude of mastering issues. In a bright spot, resolution looks fair, handling passable detail. The source film stock shows dirt and damage. Not severe, but enough to notice. Another clean-up pass is in order. Grain meets an average encode, noisy in spots, and choking on smoke/fog. Banding is a usual player too.

PCM stereo and 5.1 Dolby Digital, each with issues. PCM puffs up the low-end, too boomy and aggressive to ever feel natural. This causes dialog to sound heavy, albeit clear.

In comparison, the lower volume typical of compressed tracks oddly helps, softening the LFE’s punch. Like everything else on this disc though, surrounds make their presence known with aggression. Gunshots echo into rear channels, school ambiance runs loud, unusually potent open air breezes – those surrounds try too hard to be heard.

Tamra Davis and Drew Barrymore offer a commentary together. After this, MVD goes all out, producing a nearly 90-minute making-of/retrospective, using interviews with Davis and other key behind-the-scenes players. Davis is then given the chance to discuss her career for nearly 40-minutes in a detailed feature. An EPK featurette from 1992 runs 20-minutes, and a few clips taken directly from the set follow.

Guncrazy loses itself in violence, ruining attempt to humanize two murderers on a rampage out west.

The 15 unaltered images below represent the Blu-ray. For an additional 23 Guncrazy screenshots, early access to all screens (plus the 120,000+ already in our library), 120 exclusive 4K UHD reviews, and more, subscribe on Patreon.