It’s little more than a gag on the surface, calling Tremors’ town Perfection. It’s all of four crumbling buildings, landlocked by mountains, and with a population of 14, maybe 15. Yet, Perfection suits this middle-of-nowhere spot.

Places like this don’t exist now, crude western living where everyone knows and cares for each other. Look at the settlers too – two handymen, an Asian shopkeeper, a big city graduate student, and two survivalist/conspiracy theorists/second amendment-celebrating isolationists. Find a better snapshot of America in such a tiny populace. Or don’t, because there isn’t one.

Tremors is a classic slice of Americana without intending to be

Tremors is brilliant. Seems a stupid adjective for a movie about ground surfing snake/worm monsters that maybe came from Mars or dinosaur times, but it’s true. The script’s clever foreshadowing bookends the action at the same scene, seamlessly predicts the looming danger (Mindi’s pogo stick a tiny background moment), and makes people pay for their laziness (the broken Pepsi machine). Tremors sends up genre filmmaking, the locals asking a seismologist about the creatures, because in these movies, scientists know everything. Flummoxed, she responds with, “Why do you keep asking me?”

Kevin Bacon and Fred Ward create Tremors’ soul; the inconsistent sequels, even at their peak, never found the magic of these two together. Their antagonistic chemistry brings laughs, melding horror/comedy in a way few films were able post-Gremlins. To say the actors exude camaraderie is understating their performances, making these two blue collar guys into capable, plausible heroes by the end. Their only plan is to leave Perfection, and instead, they’re forced to stay, realizing how appreciative this cliché town is.

Although entirely formulaic, from the farmer’s sheep being slaughtered and the town drunk offed to set a mystery before the action, Tremors succeeds because it’s clever at its inception. The idea of a monster capably hunting by sound puts all at the same disadvantage. There’s no way for a single skill set to succeed. Chang (Victor Wong) can’t sell his way out, Val & Earl can’t fix a collapsing building, Burt (Michael Gross) can’t shoot through sand, and Rhonda (Finn Carter) can’t outsmart what she can’t see.

It’s a little of everything by the end, from bulldozers to makeshift grenades and smart planning. Without ever leaning on a, “together we’re better” message, Tremors forms one, convincingly bringing people from all different ways of life to beat this threat. Tremors is a classic slice of Americana without intending to be. 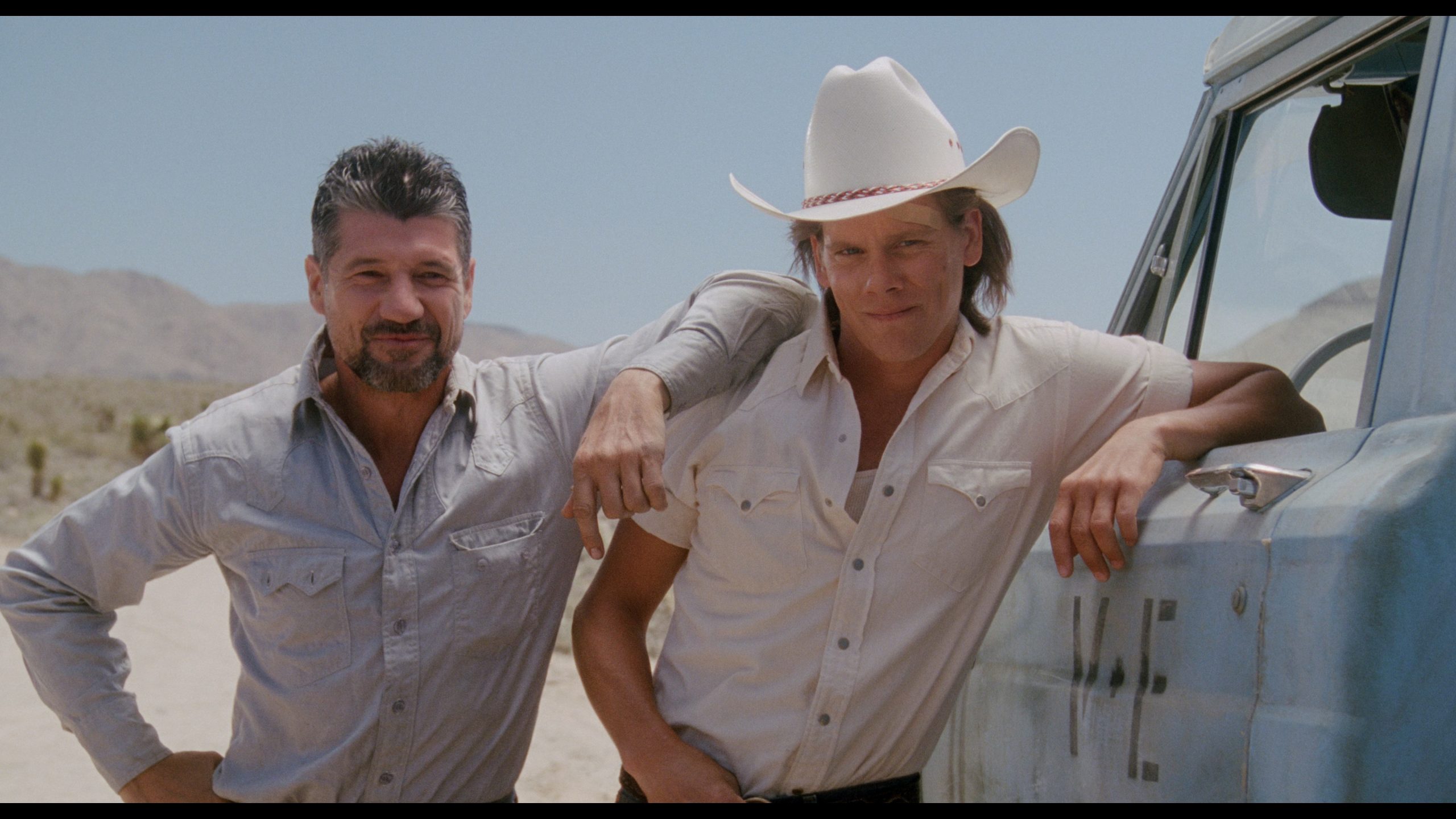 Desert scenery excels when under the command of Dolby Vision. Superlative contrast gives Tremors a gorgeous spark, lifting the imagery well over previous Universal HD releases. Even when reflecting from rusting metal, the brightness looks stellar. Strong, deep shadows where necessary capture the corners in Chang’s shop or those brief underground effect shots.

Arrow also gives Tremors the the luxury treatment, saving this movie from Universal’s usually awful masters for this movie. A 4K source typically handles the preserved grain structure, a few lapses aside; it’s nothing to worry about, and generally only when dealing with smoke/dust. Mostly, the disc keeps imagery looking like natural film. Sharpness brings out the small grains in desert sand or rock walls. Weeds in the distance, worn wood, old metals, and other textural elements never looked so pure. Definition on faces appears equally outstanding.

Options come in triplicate, all DTS-HD, including stereo, 4.0, and 5.1. Mostly delivered via the front soundstage on the surround mixes, the wide split between channels tracks shuffling dirt as creatures move about. Individual tentacles scatter about, using stereos effectively to convey space. Listen as Megan locks the station wagon doors – the clicks match across the fronts.

Decent if unspectacular bass finds a passable rumble as creatures attack. It’s a decent kick, enough to notice, but not challenge any subwoofers. Like the slightly dulled dialog, the low-end sounds a bit strained and flat, typical for something of this age.

Arrow stuffs the UHD with bonuses, two commentaries listed first. Director Ron Underwood joins producers/writers Brent Maddock and SS Wilson. Author Johnathan Mellville (of the highly recommended Seeking Perfection) is second. Making Perfection runs around 30-minutes, offering new interviews, looking back at the production. Nancy Roberts speaks for 22-minutes on how the movie came to be. Director of photography Alexander Gruszynski chats for 10-minutes. Next is associate producer Ellen Collette, remembering set stories for 12-minutes (including her engagement to Gruszynski). Bringing together the effects team, they’re given 21-minutes. Ernest Troost and Robert Folk, co-composers, take 13-minutes to speak about their work.

An older documentary (dating to 1996) runs 44-minutes, great back then, but now eclipsed by what’s on this disc. Footage taken from the effects set makes it to 10-minutes. Deleted scenes (four of them), TV edits (16-minutes worth), EPK stuff, and trailer/image galleries finish the 4K disc.

The first Blu-ray ports all of this over, but then comes an additional Blu-ray, beginning with a slew of extended interviews, most running near or well over an hour. Pre and post-screening Q&As come from the 25th anniversary showing, 71-minutes total. A gag reel is hilarious, offered with an optional commentary/introduction, around 10-minutes either way, and sourced from a VHS. The final piece? Three of Ron Underwood’s early short educational films.

A comedy horror masterpiece, Tremors’ creative streak is ceaseless, even when leaning on familiar tropes.