Billed by Universal as a million-dollar super serial in the early 1940s when that figure meant something, Riders of Death Valley features a cavalcade of b-movie western stars. Matinee idol Dick Foran is gunslinger and erstwhile hero Jim Benton, leading a group of heroes known as the Riders of Death Valley. The western serial pits them against Wolf Reade (Charles Bickford) and his outlaw group known as the Wolf Pack. Fifteen thrilling chapters details their conflict over a lost mine worth a fortune.

Riders Of Death Valley’s story is about a group of vigilantes protecting minors in the heady days of the California gold strike. Crooked schemers headed by a villainous businessman tangle with Jim Benton’s colorful vigilantes in a fight for control over a fabled lost mine. The plot starts out sluggishly, spinning its wheels for the first several chapters. The cowboy action and fighting starts heating up at that point.

The adventure follows the expected serial formula to a tee. Each chapter ends on a daring cliffhanger, almost always threatening some character’s life in a death-defying scenario. The fights and stunt work are first rate for the 1940s with authentic cowboy grit.

The rough-riding western serial has a pedestrian beginning despite the star-laden cast, Riders of Death Valley eventually develops into a thrilling ride with real action and suspense. 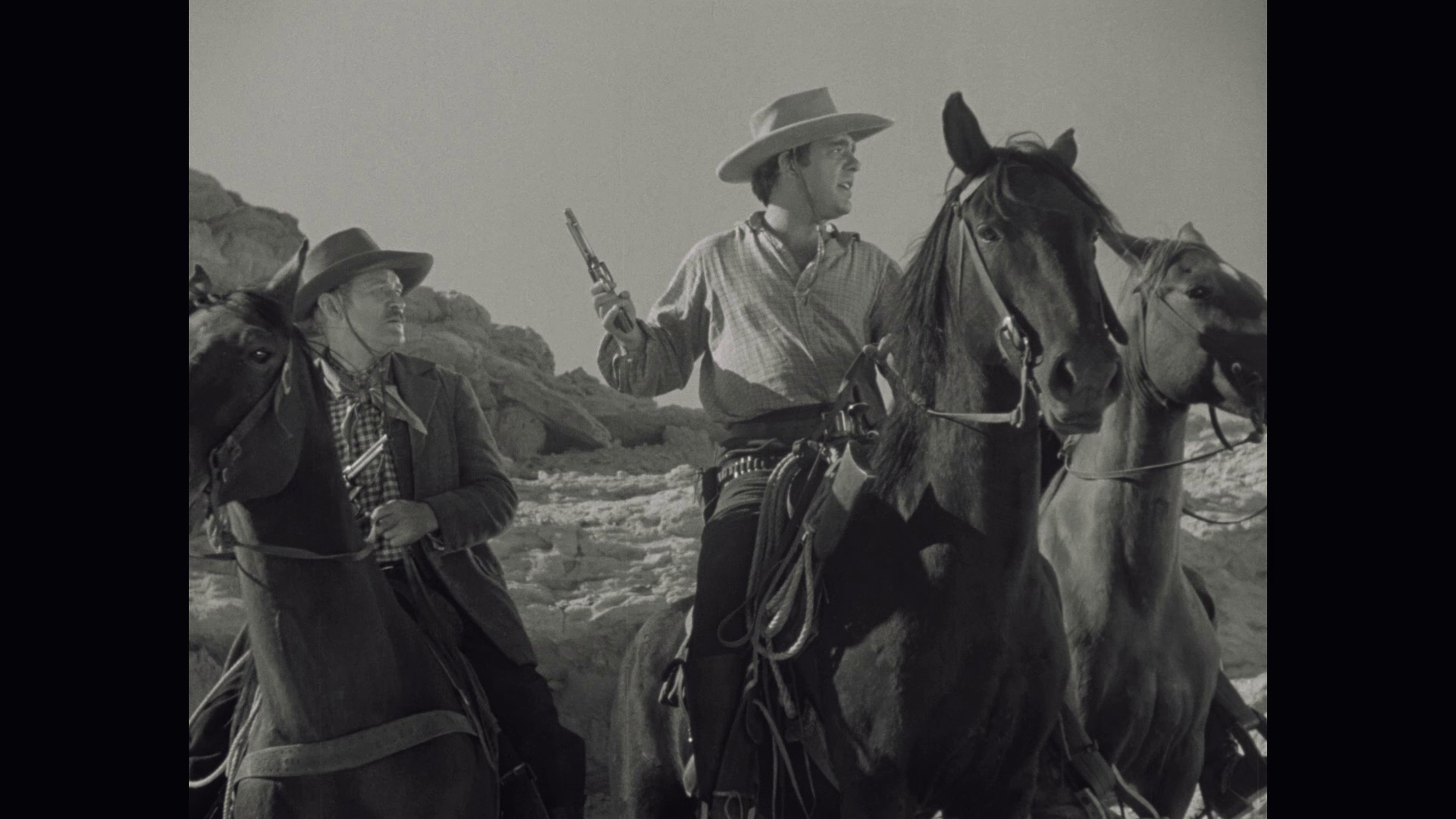 There’s conflicting information regarding VCI’s new film transfer. Their own website claims the new BD is a “2K Restored” special edition. Riders of Death Valley’s cover boasts “restored from a new 4K scan of the Studio’s 35mm fine grain!” Further confusing matters, a disclaimer on the back cover lists how the negative for Reel #1 of Chapter Six was lost or damaged beyond repair, warning about the drop in picture quality during those scenes. A 16mm print was substituted for those scenes.

Outside of the noted problems in chapter six, the presentation is stable and consistent with no major contrast issues. Black levels hold up remarkably well for the serial. All fifteen chapters are spread over two discs, a BD-50 and a BD-25. The AVC encoding nicely handles the largely static cinematography. There is palpable texture and detail present in the new scan.

Riders of Death Valley was a film serial produced by Universal, first released in 1941. VCI has issued Universal serials before on Blu-ray like The Phantom Rider and Jungle Queen with mixed results. The good news here is that the film elements are in fairly fine condition. The film scan itself may or may not be 4K in resolution, but it’s generally a well-managed image harvest producing solid detail and clarity.

The 1.37:1 black-and-white presentation showcases average depth and shadow delineation. Some minor filtering has likely been applied as part of the restoration, reducing visible grain structure in certain scenes. Film wear is modest. A few gate scratches and running vertical scars pop up on occasion.

Comparatively speaking with some other serials from Hollywood’s Golden Age available on Blu-ray, Riders of Death Valley has reasonably crisp definition. It doesn’t receive a full-blown film restoration in the mold of Universal’s classic monster transfers. However, serial fans should be excited for Riders of Death Valley on their big screens without worry. This is pleasing Hi-Def picture quality from the 1940s.

The 2.0 PCM soundtrack in mono audio is thin with significant limitations. The over-bearing theme music was harshly recorded, producing a shrill sound in the upper frequencies. Dialogue is relatively smoother with clean fidelity. Bass is on the wimpy side for all the cowboy action happening. Fights, horse rides, gun shots, and other western sound effects are flat and dull in impact. This is a serviceable but dated recording, hampered by age and wear.

Distributed by MVD Visual for VCI, Riders of Death Valley actually includes an audio commentary and an extensive set of original promotional material.

Audio Commentary – Writer and film historian Toby Roan delivers a somewhat dry commentary on chapters one & two. Mostly covering the project’s long list of actors and their other film credits, it’s informative if you are new to the world of Universal’s serials.

Riders of Death Valley Trailers (04:31 in HD) – Vintage trailers for the serial.

The star-studded western serial starts out a little slowly but finishes with a flurry of action and cowboy grit.

The 15 unaltered images below represent the Blu-ray. For an additional 15 Riders of Death Valley screenshots, early access to all screens (plus the 120,000+ already in our library), 120 exclusive 4K UHD reviews, and more, subscribe on Patreon.